The Anti-America Cure: Patriotic Thrills That Won’t Endanger the Republic (or Your Soul)

Hot dogs, flags, and fireworks lose some of their appeal in light of the nativist hysteria gripping America at the moment, but this list will help you think America’s kind of great again.
Menu

Hot dogs, flags, and fireworks lose some of their appeal in light of the nativist hysteria gripping America at the moment, but this list will help you think America’s kind of great again.

FLOOD’s weekly Pop Culture Cure offers entertainment antidotes to the most upsetting developments of the past week. (Because therapy’s expensive, and stolen streaming video is not.)

There are lots of really great things about America—things like the Constitution, free speech, the Statue of Liberty, amber waves of grain, and purple mountain majesties—but I think it’s fair to say that these are not the things that we celebrate on July 4th. Independence Day, so called, has a lot more to do with sunburns, too much food, and too much drink. Now I’m not calling for moderation or sunscreen or anything crazy like that. But why not throw a little more Coney Island in the mix, a few more journalists, and a show-tune or two. Now that’s a holiday.

It may be too obvious, but it’s also obviously, undeniably, infectiously great—and a nice antidote to the retrograde (read: racist) politics of the current election cycle. I was extremely curious about this album when it first released, owing to the fact that I’d never heard so many different kinds of people raving about a musical before, but I was still taken completely by surprise by Lin-Manuel Miranda’s hybrid musical creation. After just a few bars I was enthralled, and a few bars later I was running to the beat, and a few minutes after that I had to cut my run short and revert to walking in order to follow the characters and themes through the endless imaginative wordplay. I’ve never seen a performance and I probably never will, but the album alone conveyed the sense of the production as clearly as if I had. “Wait for It” may be my favorite song, and “It’s Quiet Uptown” may be my emotional kryptonite, but “My Shot” is the way I’m gonna start my Fourth, guaranteed.

Paul Verhoeven is not an American by birth, but he is the man who gave us RoboCop (which, hybrid-genre alert, is about a kind of zombie who is also a kind of robot who is also of course a cop). So he is certainly American in spirit, and his own personal brand of Americanness is gonzo AF. Gonzo (cf. Showgirls), and explodey (cf. Starship Troopers), and pessimistic about the coming end-times in a way that feels uncannily realistic, especially given the cartoonish level of violence in most of his films (cf. the RopoCop in question). And maybe you’re thinking, but hey, c’mon, how much can a sci-fi shoot-’em-up movie about the plight of post-industrial America (specifically Detroit) have to say about the problems of today? But then remember that one D. Trump is trying to virtually rewind RoboCop to the point before everything went to shit.

Bob Dylan gets all this credit for metaphorically writing himself into existence, but that shit is weak. The “Bob Dylan” character is formless and shallow. He is ephemeral, like time itself, and he is unknowable, as are we all, yadda yadda yadda. But if you’re going to do a hugely public bit of performance art with your persona, I say make the character big enough to stand out in this great book of life that we all share. And in that respect, it’s hard to find a better character than Strummin’ Unkie Sam himself, “Bruce Springsteen.” Some might wanna sit down with “Atlantic City” this July 4th, others may want to get their hearts pumping with “Thunder Road,” or their fists pumping to “Born in the USA,” but for me it’s “The River” all the way: past sadness, past hope, and into the melancholy reflection upon our wasted present. Trump may be the Apprenticer or whatever, but there is no true replacement for The Boss.

The Leave Nothing ad campaign, directed by Michael Mann

Football is as American as the Marlboro Man, as Jim Beam, as hot dogs. It is, in other words, very American and very, uh, problematic (not to say deadly). But we are obsessed with it! Still! And our obsession does seem to speak to something beyond the sport’s simple entertainment value. We love it because it shows us as we would like to be: hard, tireless, talented, and, well, strong. This iconic Michael Mann ad captures those qualities as little else does (as the Super Bowl™ certainly doesn’t). And it’s got the Last of the Mohicans score. It is, in other words, as American as apple p—OHMYGODWATCHOUTFORTHATLINEBACKER!!!

The best piece of travel advice I ever received was given to me prior to my first trip to New York. A student teacher suggested that, no matter what else I did, I should take time to go to Coney Island. I didn’t go that time around, but he was right. And I can only assume that Beyonce consulted this same gentleman prior to shooting her “XO” video. The video, again, that contains the great American artist Beyonce, on the  great American mode of transportation the rollercoaster (just kidding they were born in Russia but who cares; they feel American), at the great American icon of Weird, Coney Fuckin’ Island.

Independence Day: Resurgence: The Second Surgence of Overlage Spacecrafts just came out, and despite its lukecool critical reception it offers a solid reminder that if you want to get away from the complexity of real-world politics, there’s no better genre than the Americans vs. Aliens genre. And what is more American—more guileless, more brazen, more action heroic—than Bruce Willis; and what is more alien than a space-rock. Actual aliens have minds, but a space rock is the Borg of inanimate villainy. It cannot be reasoned with; it can only be destroyed. And in this case, it can only be destroyed by a star-studded cast of driller astronauts. I still can’t believe anyone can resist the charms of this movie. It may be dumb and feature Aerosmith, but no movie that shamelessly rips off the plot of Wages of Fear can fail to entertain.

There are very few sitcoms that manage to escape the privileged setting of a very (weirdly) upper middle-class America, but Roseanne is that rarity. The show managed to juggle jokes and a surprising amount of heartwarming moments with a fairly unvarnished representation of a Midwestern family struggling to make ends meet. Plus, Roseanne Barr spat after singing/shrieking the national anthem at a MLB game and pissed all of America off. And pissing America off is like most American thing an American can do (after blowing up a meteor I mean).

He Got Game, directed by Spike Lee

And it’s at least equal to the sum of its parts. 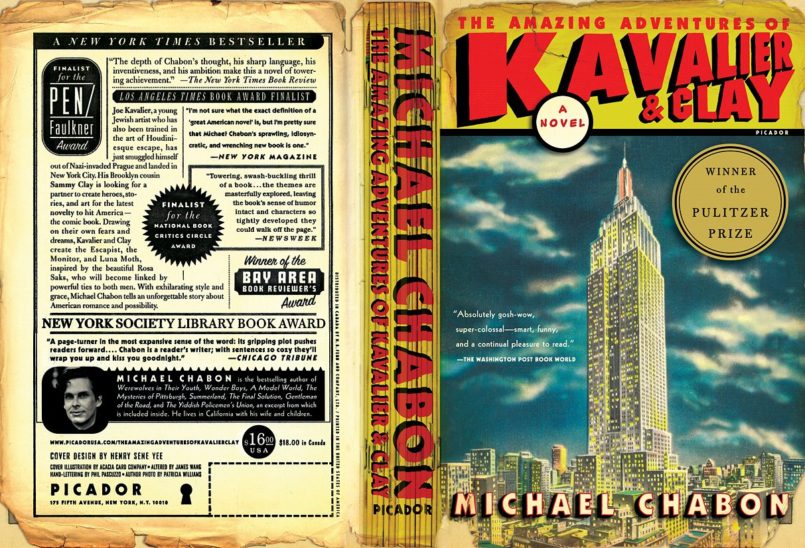 The Amazing Adventures of Kavalier & Clay, written by Michael Chabon

Superman may seem naïve and simplistic now, but it’s a mistake to think he’s a character without depth. The idea of Superman, after all, didn’t arise from some time-buried folk tradition, a la Paul Bunyan; instead, he arose at a very specific time and among a very specific milieu. He was a character of maximum strength created by people of minimal power. The entire comics industry, in fact, arose at the hands of some poor, dorky Jewish kids just when Hitler was marching German troops all over Europe. It was the baldest projection ever, but it was pure genius. Chabon takes up this idea in his much-celebrated fictionalization, and follows the career of his two proxy Superman creators (Kavalier and Clay) as they develop their own superhero (The Escapist), profit from their creation, and then deal with the fallout. The American Dream is a great idea, but most great dreams lack a plot; this book doesn’t.

All the President’s Men, directed by Alan J. Pakula

When times get dark, when America gets un-American and bald eagles start attacking balder birds, it’s nice to remember that the bad guys don’t always win, and that sometimes American values (real, not so-called) prevail. Movies that proclaim their patriotism (The Patriot, Air Force One, Independence Day, Pearl Harbor) can often wind up feeling hollow, so there’s nothing like an undercover American values movie (First Amendment y’all!) to defibrillate your cold, dead, apathetic heart.

In conclusion: America is dead; long live America! And all hail the best thriller, the best procedural, and the best Dustin Hoffman movie that doesn’t end with “Outfire.” Celebrate your independence by celebrating independent thinkers, y’all. FL