In Conversation: “Stranger Things” are Happening to David Harbour

In Conversation: “Stranger Things” are Happening to David Harbour

The star of Netflix’s throwback thriller chats about working with Winona Ryder, tragedy, and suspending disbelief long enough to love working in horror.

It’s a cool, calm November night in the small suburban town of Hawkins, Indiana. The year is 1983. In the quiet basement of a family home, four twelve-year-old boys sit enrapt by a tense game of Dungeons & Dragons. Their luck has run out: the Demogorgon has reared its ugly heads. Chances for victory in this ominous battle are slim, but before the first spell can be cast, mom calls downstairs to disperse their party. It’s already past ten o’clock. The deflated friends pack things up and say goodnight before wheeling their Huffy Dragsters out into the Midwestern night. One of them will not make it back home.

This is the stage that fraternal filmmaking duo Matt and Ross Duffer have set for their new series, Stranger Things. It might be enough to stop there and build a show around the search for a missing child in a comically dull town, but there’s much more than meets the eye going down in Hawkins. David Harbour, a consummate actor’s actor who has stolen scenes in critical darlings like Brokeback Mountain and Revolutionary Road, takes the lead as Chief Hopper, a skeptical law officer with a tragic past who is thrust into action when the boy goes missing. Winona Ryder plays the grieving mother who struggles to decode messages sent from her son via unplugged light bulbs.

Meanwhile, in a US Department of Energy facility on the outskirts of town, Matthew Modine’s character oversees mysterious testing that revolves around a little girl with freakish telekinetic powers. When the girl escapes and winds up in the company of the young adventurers, they hide her in a basement fort and attempt to decode her cryptic clues in hopes of conquering the beast that consumed their friend.

Despite supernatural themes and a slew of weighty reference points—the 1980s horror cinema of Wes Craven and John Carpenter, Twin Peaks’s mystical whodunnit plot structure, the goofy-but-charming throwback adolescence of Freaks and Geeks, and The X-Files’s government conspiracy theories, to start—the Duffer Brothers navigate their influences by telling an inherently human story about a town that has lost its innocence and the different ways its people are affected. How can life as we know it continue when everything is altered? How can we band together to face the unknown wrath of the Demogorgon?

Harbour, whose well-honed acting chops are given a chance to shine opposite a devastating Ryder, has some of the answers, as well as the reasons why Netflix decided to show faith in a couple of relatively unknown filmmakers and their weird and wonderful winner.

How did you first get involved with Stranger Things?

I read the script and I was blown away. It was just the type of difficult, complicated leading man that I had wanted to play on television. Plus the storytelling was so good. I’ve found that a lot of times, the more complex the character is, the less you want to turn the pages, but this I felt had both of those elements: it had these really rich, complex characters with good backstories and interesting things to play, and then on top of that, it spun a great yarn. Winona probably came on board at the same time. We’re very close to each other, and we were still the first ones that they’d set. Winona and I met and hung out in LA and talked a lot about the story. We talked about the character and I was sort of involved in that process, which was really exciting to me, developing this guy and who he was going to be.

The show seems to transcend its nostalgic references. How do you think it achieves this?

The way that the Duffer [Brothers] write stuff—they just have a lot of heart. They really do have deep feelings, and they are unafraid to put those things on the page and shoot them. Even though I think it’s a very cool project, I don’t think that they’re interested in it being “cool” in any way.  They really are interested in touching people, and that comes across. Two film-geek, nerdy hillbillies that came out of North Carolina somehow got a deal with Netflix [laughs], but they are unique for that because they don’t have the jadedness of other writers. They just love film, they love telling stories, they’re really good at it, and they make no apologies.

I didn’t drown in addiction and get lost in these other things, [though,] because I was able to have this outlet of art where I could go do a play or do a film or something and really speak about the insanity of what I saw.

So many shows on cable are so good, but I’m a little bit tired of feeling the preciousness of some of that TV. I don’t know how to word this, but people are a little bit up their own asses when they’re making this stuff; they know how great it is, [and] they’re sort of congratulating themselves. And I don’t think that our show has any of that. I’m so grateful for that. We’re really just there to tell a moving story, and I think we achieve that. That’s all I’ve ever wanted to do as an actor.

Did you bring any personal elements to the role of Chief Hopper?

[Laughs.] I don’t really want to tell you, because it would reveal too much about myself. A lot of his bad qualities I brought in from myself. I identify with him in terms of having a complicated time of it. He had a tragedy in his past, he had a child of his own die, and he sort of hasn’t been able to recover. He’s gotten lost in Tuinals and alcohol, messing around with women, not giving a shit about his job, and coasting on what he feels is his own personal charm. He lives in a very ordered world of right and wrong, good guys and bad guys, and then he’s met with this force of his child dying, which makes the world incomprehensible to him. There is no bad guy to catch in this tragedy. I’m not going to say that I am that guy, but all that feeling lost I have definitely felt. I identified with him a great deal. I didn’t drown in addiction and get lost in these other things, [though,] because I was able to have this outlet of art where I could go do a play or do a film or something and really speak about the insanity of what I saw. 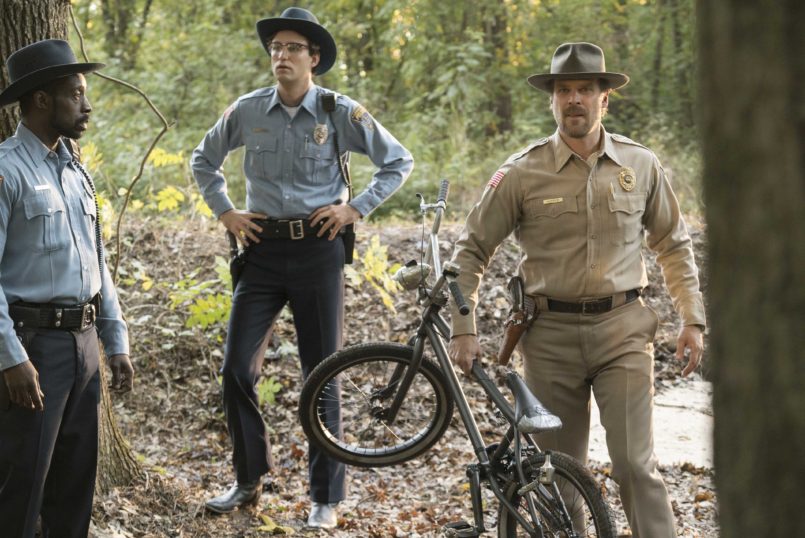 It’s a notable cast with yourself and Winona Ryder and Matthew Modine involved, but can you talk about working with so many incredibly talented young actors?

Acting can be very hard, and I think it’s hard to find child actors who can really drop in and not be self-conscious. To be thirteen, twelve, eleven years old and to be relaxed and have the poise and be able to just show up and deliver like that—I was sort of blown away. But they are also just thirteen-year-old boys, they mess around on set, and their hormones are going crazy. Some days it can be like a nightmare, but what they bring in their performances is that unique feeling of what it was like to be thirteen years old. That’s really special in a child actor who’s not trying to cover that up, so I think we lucked out on the kids that we got.

Despite fantastical elements in the story, Stranger Things does a very good job of suspending disbelief and keeping the viewer invested. To what do you attribute this?

I think the plausibility aspect was really important to [the Duffer Brothers], and to all of us. Even though it is a supernatural story, this is a mother who’s lost her child and feels like she might be going crazy. They wanted Winona to be a grieving mother, they wanted me to be a lost cop who genuinely tries to solve these problems, and I think that sort of sophistication of storytelling is also unique in these times, especially when you’re dealing with something like a genre piece. It has sci-fi/horror elements to it, but I also think it’s a drama. I love genre shows, but I also want emotional bang for my buck. I want to feel something. And I feel like this really does both of those things.

Do you have any horror or sci-fi movies from the early ’80s that are favorites of yours?

Honestly, I’m kind of a wimp when it comes to this stuff. I tried to watch A Nightmare on Elm Street when it first came out, and I had to leave the theater. Right after that scene where—is it Johnny Depp?—one of the kids, like the hand goes through his body, and I was like, that’s it, I’m out. I can’t really deal. I’m still scared of horror films, so hopefully I’ll be able to watch the whole series of Stranger Things, but I’m really just a lightweight. FL