Lift Off: Pitchfork Fest Gets Jazzy and Transcendent

Lift Off: Pitchfork Fest Gets Jazzy and Transcendent

Sun Ra’s Arkestra formed the spiritual center of the eleventh edition of the Chicago music festival.

The sun was at its highest point in the sky yesterday afternoon when Sun Ra’s Arkestra touched down on the Blue Stage at the Pitchfork Music Festival in Chicago’s Union Park. It was in this city seventy years ago that the man born Herman Poole Blount made his first musical recordings while working as a strip-club pianist in Calumet City. He’d go on to fundamentally change the shape of jazz and by extension alter the course of pop music in general; without Sun Ra’s cosmic consciousness, Andre 3000 is still Andre Benjamin and has a considerably less interesting wardrobe.

Pitchfork Fest, now in its eleventh year, has positioned itself as the foremost indie-rock festival in the country, and though the weekend featured powerful performances from Savages and Girl Band, and rollicking punk and soul via Sydney’s Royal Headache, it’s difficult to think of this year’s festival as being “rock” in any sense of the word. That’s in part thanks to the festival’s willfully diverse lineup, but it’s also a product of years of shifting conversation around what constitutes the canon. Simply put, a music festival run by a bunch of music critics wouldn’t have featured more R&B singers and footwork DJs than punk bands even a few years ago. 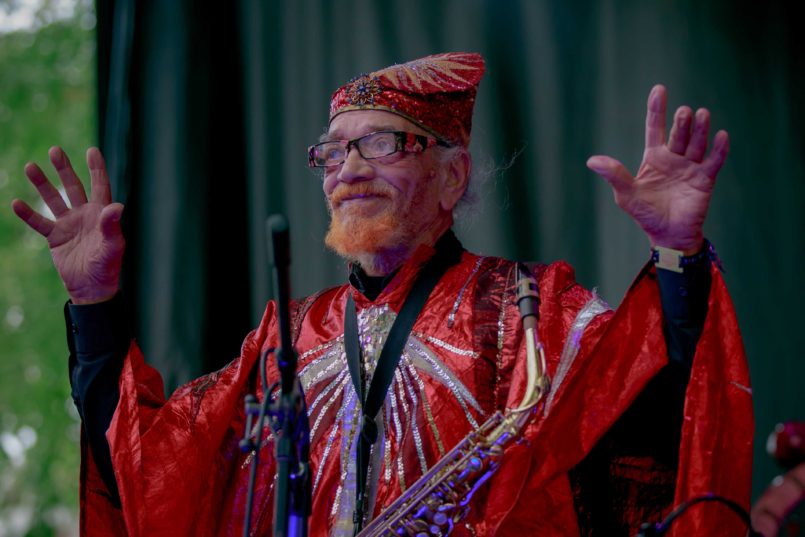 So it makes a little sense that the Arkestra, who have continued to tour since their leader’s death in 1993, opened the final day of this year’s Pitchfork Fest. So much of the music featured this weekend finds its antecedent in the way the group plays, whether that influence is musical (most obviously in the case of Kamasi Washington) or philosophical; everyone from the triumphantly reunited Digable Planets—whose mid-’90s afrofuturism sounds just as natural today as it did during the Daisy Age—to Woods—who punctuate their set with a horn-heavy “Sun City Creeps”—can trace something of their aesthetic lineage back to outer space through postwar jazz. Even Sufjan Stevens emerged from the cocoon of Carrie & Lowell to deliver a career-spanning, day-glo-bright set that culminated in a Moses Sumney–led cover of Prince’s “Kiss.”

The Arkestra, who are now led by alto sax player Marshall Allen, himself 92 years of age and still treating his keys the way Tom Verlaine treats fretboards, took the Blue Stage as unassumingly as a group of octagenarians in neon-foil costumes can. The horn quartet that forms the group’s spiritual center collectively floated bright clouds of drone and bop, which in turn gave whichever players took the lead the space to go wild without risk of losing the rhythm. The ease with which the group interacted musically further enhanced their emeritus status; you can’t get that wigged out and stay that cool-headed and not look like a don. The crowd, remarkably large for an ancient group playing at the hottest point of the weekend, was rapt, shifting lightly with the band’s swing and applauding wildly for singer Tara Middleton. 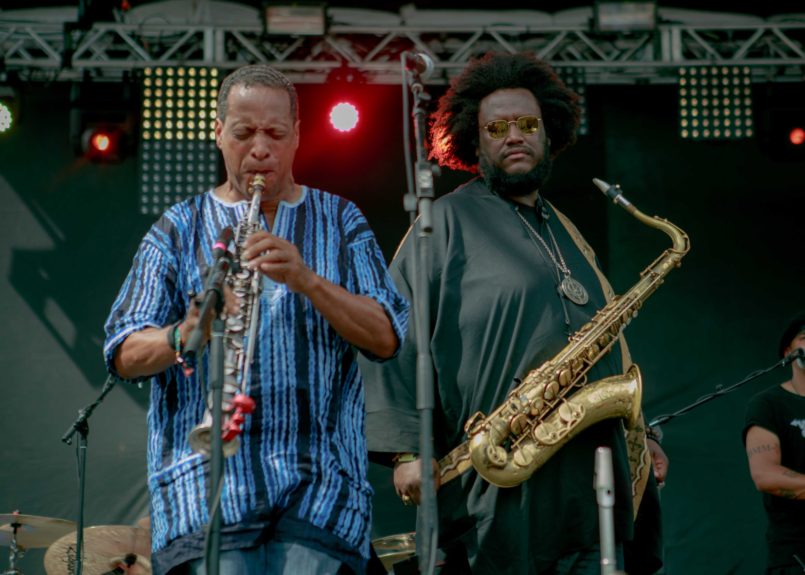 If the Arkestra was offering soft transmissions from outer space and outside of time, Kamasi Washington and The Next Step translated it into the hard present. Jazz standard “Cherokee,” which on Washington’s album The Epic is a head-fake in the direction of convention, was transformed by Brandon Coleman’s wah-driven keyboard washes into concrete funk. Washington used his limited set time to feature his bandmates, granting a lengthy and mellifluous solo to his alto-sax-playing father Rickey and showcasing bassist Miles Mosley, who ran his instrument through a wah pedal, too, then bowed the thing until it sounded like a modular synth. Singer Patrice Quinn led a furious charge at the end of “The Rhythm Changes,” which culminated in a sustained blast of noise from Washington and trombonist Ryan Porter.

The dissonance, and all of the emotional release that came with it, and the crowd’s maniacal response to it, drew the line tighter between Washington and, say, Sonic Youth, who played the 2007 iteration of Pitchfork Fest. The distinction between art-rock and jazz—or, for that matter, between punk and hip-hop or electronic music and metal, as exhibited by Oneohtrix Point Never and FKA twigs, who closed out the weekend—has always been superficial, but it’s hard to think of another time when that superficiality was so apparent to so many people. There’s plenty of ugliness in our world, and it seems to get darker every day. But as the Arkestra will tell you, the world has been crazy for a long time. Maybe it’s better to escape to outer space, even if only for a weekend, even if your spaceship arrives via Chicago.