Putting Out the Fire with Gasoline: An Introduction to the Many Faces of Alex Cameron

A lounge act for the darkest recesses of your mind, Sydney’s latest (and greatest) musical export uses his Secretly Canadian debut to contort into a variety of shapes—none of which may be his own.
Menu

Putting Out the Fire with Gasoline: An Introduction to the Many Faces of Alex Cameron

A lounge act for the darkest recesses of your mind, Sydney’s latest (and greatest) musical export uses his Secretly Canadian debut to contort into a variety of shapes—none of which may be his own.

It’s nine o’clock on a summer night in Paris, and Alex Cameron is inside watching the cats. Not his cats, mind you (he’s just “holed up” taking care of them in two different apartments in the 3rd arrondissement), and who knows where he’d be if he didn’t get the short end of the time zone stick for an interview with an American publication. But he does admit that he’s been laying low for a little bit before the arrival of his debut album, Jumping the Shark, and the hard months of touring that he and his “business partner” Roy Molloy have ahead of them.

“I’m enjoying talking to people that I’ve never met,” he cracks, using the opportunity to introduce me to both his sense of humor and his Australian accent at the same time. “It’s a little bizarre right now—there’s cats meowing at me and all that good stuff.”

This is a press circuit that’s been a long time coming for Cameron. Going back as far as 2013, Jumping the Shark was actually already available online as something of a business card, as he describes it, picking up dividends from die-hards and gathering interest from obscure corners of the web. Given the themes of the album—struggle being chief among them—that path may have in fact bolstered the effect of the music itself, which eventually found its way to Secretly Canadian, the relative “big dog” that saw something in this twisted patch of fables about failure and decided to give it a proper release. (“No changes at all,” he explains, when asked if the two releases are any different. “Same monster.”) And then, just like that, after several years of slightly premature warning, Cameron’s original message to newcomers on his gloriously ridiculous website was finally up to date: “STICK IT UP YOUR ARSE,” it reads, “I’M THE NEW GUY IN TOWN.”

Speaking about Jumping the Shark, Cameron is confident and enthusiastic—and he should be. The album is as devastating as it is awe-inspiring, using synth-based arrangements to present eight different mini-narratives about a wide selection of seedy characters. There’s a businessman, a drunk, a washed-up TV star, and a scorned lover, just to point to a few, and their stories involve murder, suicide, assault, and other forms of highly serious shit. It recalls Randy Newman’s 12 Songs (were it to be performed by Ian McCulloch), and it feels something like smoking a pack of cigarettes on your porch the day before getting evicted (were you to be in a strangely great mood about that).

“I wanted to write songs that were about characters that were so focused on themselves,” he says, “that they couldn’t see the sense of tragedy about them because of that flaw. So Jumping the Shark addresses that sense of self-pity and that sense of feeling like you deserve more, and trying to overcome that because I was too focused on myself.” 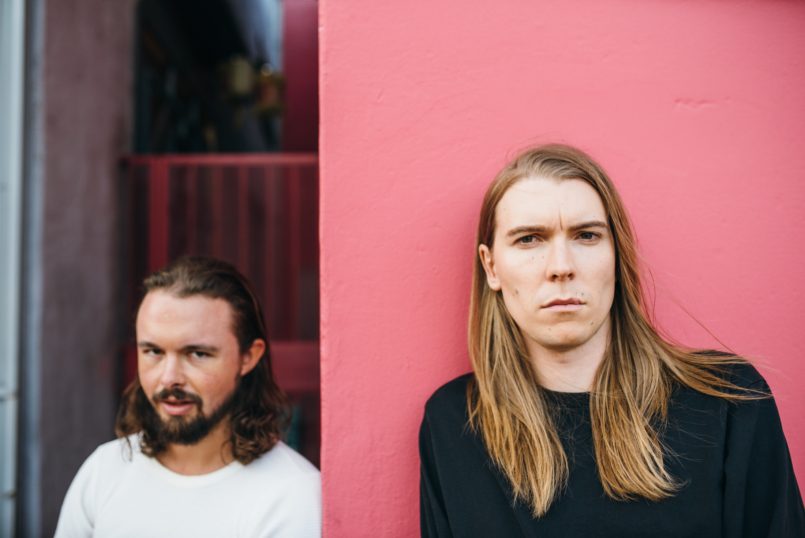 But who is the “self” that he’s referring to here? Who exactly is Alex Cameron? On the cover of his album, he’s depicted as an older man (face wrinkled or scarred, clunky hearing aid in ear), firmly contrasting with his more current persona, one in which he is disturbingly nimble on social media and has a propensity for dancing on top of Cadillacs. “It’s all very personal, and the experiences I’m talking about are on a specific, individual level,” he assures me, yet I’m not totally sure for most of the interview whether I’m talking to Alex Cameron the musician from Sydney or Alex Cameron the lounge singer from the apocalypse. It’s only when I move the conversation away from Cameron himself, however, and onto the specific characters of his songs, that I realize how beside the point that distinction really is anyway.

“I think tragedy has a lot to do with what the individual is focused on,” he answers in response to the question of the fate of Ken DuPont, the suicidal TV star whose story is told in “The Comeback.” “When you read classic tragedy stories, it’s like, ‘If only this person could just look outside the box for two seconds and see that there’s more going on—that they don’t need to follow some course of action just to reach the end of the story.’ That’s the tragedy, you know?”

“I think tragedy has a lot to do with what the individual is focused on.”

Like any short-story writer worth their weight, Cameron has everything mapped out in incredibly precise detail beyond the surface of the words. For instance, the name “Ken DuPont” isn’t mentioned in the song itself—that kind of info is only available if you do a bit of digging. And like any good writer, period, his emphasis on tragedy isn’t drawn by some nihilistic beef with the universe, but rather by a desire to take a closer look at what the nature of failure and tragedy is, and what’s to be learned and applied from it.

“It’s very dark, and I intended for it to be dark,” he says of the record, “because I wanted to locate something specific and talk about it. That’s what I think is the most important thing in my writing: it’s OK to talk about these things.”

That’s “writing,” and not simply “songwriting,” because what Cameron is focused on doing at this stage is continuing to expand the scope of his operation. Currently, there are essays and stories available on his site (and his Facebook posts alone should probably be in the Smithsonian of Weird Internet), and still, he promises much, much more in the future: “The [creative] world’s just multiplying before our eyes,” he says, beaming about the prospect of working more closely with Molloy on new projects. “When you look back on Jumping the Shark, it’s gonna be the window into an entire galaxy of stories and characters.”

He and Molloy are even in the early stages of developing some kind of mysterious operation known as “The Crawfish” (what it does, exactly, isn’t totally clear—yet). “The business model is thriving,” he says, in what I believe is a playful shade of sarcasm, but I don’t really know. “We have big plans for what The Crawfish is going to be eventually. It’s just we’re not in a rush.” Speaking of fish, though, Cameron has a couple of cats to feed, and it’s getting late. Failure on that front is not an option. FL