Cut from the streets of Memphis, this punk quartet turns the cacophony of city living into a symphony of distortion and dread—as well as hope.
Menu

Cut from the streets of Memphis, this punk quartet turns the cacophony of city living into a symphony of distortion and dread—as well as hope.

MEMBERS: Natalie Hoffmann (vocals/guitar), Charlotte Watson (drums), Alexandra Eastburn (keyboards), and Meredith Lones (bass)
FOUNDED: 2011, after meeting while in art school; Goner Records released their first EP Dust Red in 2013, followed by their debut album, We Are Nots, in 2014
FROM: Memphis, Tennessee
YOU MIGHT KNOW THEM FROM: Explosive single “Decadence” and its jittery, hyper-intense video, plus three years of regular touring; Hoffmann’s previous stint in Ex-Cult
NOW: Releasing their sophomore effort Cosmetic, which exhibits a deepening complexity, both musically and lyrically

Colin Newman of Wire once remarked that music is surely the most subversive of all art forms, since it doesn’t have to be intellectualized in any way.

Fitting, then, that his band should have been such a major influence on the Memphis punks in Nots. Like Newman’s group, they make exhilaratingly confrontational music that’s never quite as simple as it may first appear to be.

Concurrently, Nots have a new album, Cosmetic, whose title is inspired by the Chilean wizard of verse Pablo Neruda. Where their first long-player was the sound of raw, feral anger and youthful bemusement being unleashed upon an unsuspecting record-buying public, their latest output is significantly more complex—without losing a whit of their ferocious bite.

The band’s tour van reading- and listening-lists actually reveal much about their creative evolution. Hoffman matter-of-factly divulges, “In terms of where the lyrics came from, I was reading [Yusef Komunyakaa’s] Neon Vernacular, also A Coney Island of the Mind by [Lawrence] Ferlinghetti, and [Nazim Hikmet’s] Human Landscapes from My Country. And we listened to a lot of Chrome and Hawkwind—I can’t tell you how many times we put on Space Ritual. Also a lot of Can. So that’s where the proggy musical influence comes from.” 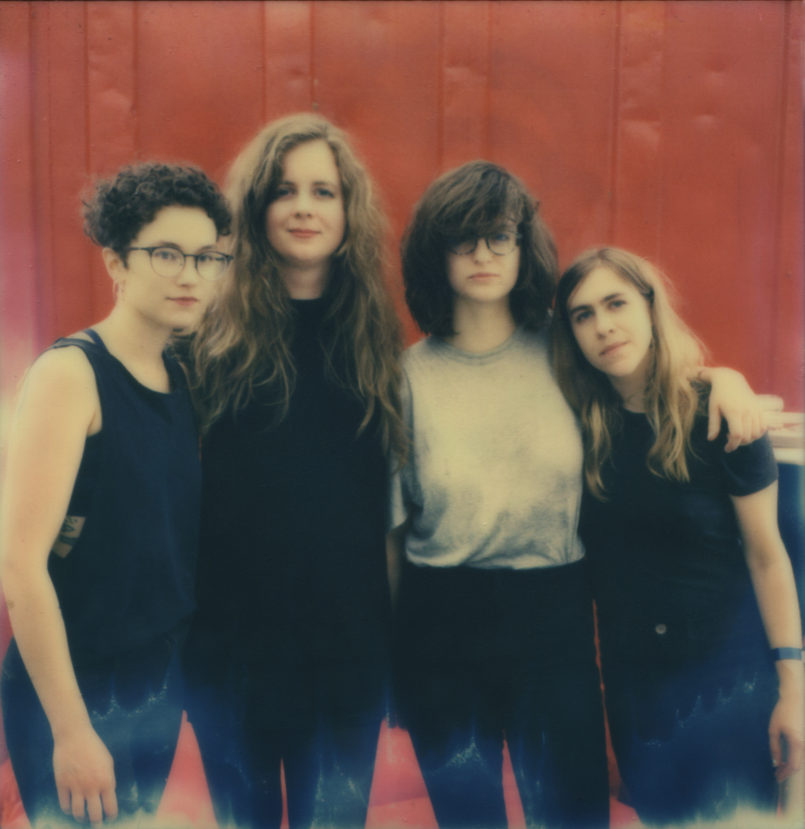 And somehow all that prog-rock pandemonium found its most perfect accomplice in Nots’s austere, tightly wound four-chord rebellion and fury. In fact, the tense, jagged grooves of new songs like “Rat King” and “New Structures” recall the similar modus operandi of the likes of Gang of Four and The Fall. And the brutally dark, chillingly metallic “Fluorescent Sunset” could likely cause even Ian Curtis to flinch a bit in his grave.

“After watching so many tragedies, and taking in the reality show that is our politics, you just start to feel alienated and cut off,” Hoffmann elucidates. “‘Anxiety’ is a good word for it. You have to warp yourself to make the best of living with such stark realities; you put on a face just to get through the day.”

“We’re all struggling against something, but there is a real sense of unity in that struggle.” — Natalie Hoffmann

But music at its most affecting—and perhaps more than any other art form—can at least begin to build a bridge across the alienation gap. And though Hoffmann admits a bit of incisive self-critiquing on the sardonic “Entertain Me” (“Eyes to the scene / Entertain me / Witness unforgiving / Entertain me”), she and her bandmates genuinely revel in the often poignant connections they have found they are able to make with fans while on tour.

“We find them to be very informed people who want to talk about important things,” she says. “And our performances seem to be able to inspire these very visceral reactions. We’re all struggling against something, but there is a real sense of unity in that struggle.” FL