FLOOD’s Download All pays tribute to the cult obsessions, strange thrills, and hidden rewards of Earth’s newest and most underestimated artform: the podcast.
Menu

FLOOD’s Download All pays tribute to the cult obsessions, strange thrills, and hidden rewards of Earth’s newest and most underestimated artform: the podcast.

Where does an obsession with horror movies come from?

Why would someone fix their attention on something made with the intent of shocking, disturbing, upsetting, startling them? To answer that, you have to start early. There’s a reason marathons start before sunrise.

Consider an anxious eight-year-old, afraid of everything in his small town. The world’s more bullies than allies. And as much as he loves to escape through the window of the TV screen, for all the movies he can depend on to soothe and excite and transport him, there’s one row at the local video store that contains a seemingly endless menagerie of nightmare imagery. And so, this kid shuffles down the new releases aisle, his back to the horror section, afraid to look over his shoulder and glimpse something he can’t un-glimpse.

But with time, those cassettes seem to be the most approachable terrors in his life. And so, one by one, and with the aid of an employee unconcerned with R ratings, this kid works his way through the horror section, until it goes from the unknown to the almost too known. Because if he can conquer these fears, maybe the horrors beyond the aisles of Movie Mart can be overcome, too.

Meeting other horror geeks can be empowering beyond common ground, then. It takes you back to the influential crossroads where you chose to brave a monster instead of hiding from it.

Rebekah McKendry, Elric Kane, and Rob Galluzzo are more than fellow geeks. They’re the experts you want on your side during a zombie apocalypse, interdimensional rift, or trivia night, with combined knowledge that is suitably supernatural. Rising from the unholy birthplace of the blogosphere—and armed by its attendant specialist-level interest in entertainment niches—these three have been around the slaughterhouse a while. They fulfill roles as writers, journalists, producers, entrepreneurs, and editors, and they’ve always balanced their scales as professionals against the heavy amount of media they compulsively consume. Many of their projects have been built around the concept of bringing horror fans together, creating spaces to catch far-ranging fanatics of the various branches of interests—the celebration of classics, the hunger for new discoveries, the gore, the suspense, the monsters, the monstrous humans, the literary, and the trashy—in one comprehensive web. Their two podcasts are no exception.

Their first endeavor, Killer POV, was a labor of love that built a cult following (figuratively—you’ve got to be careful with that term in the world of The Wicker Man and Rosemary’s Baby) over the course of three years and 140 episodes. POV was laid to rest in April of 2016, but it didn’t stay buried long. Climbing out of the grave came a reanimated beast with the brute strength and cunning intelligence of Frankenstein(wait for it, geeks)’s Monster.

Behold Shock Waves, launched in May 2016 as the flagship podcast of genre production company Blumhouse, whose low-budget-meets-high-concept model has brought the world The Purge and Paranormal Activity franchises, twisty (and twisted) one-offs like The Visit and The Gift, and the Oscar-winning drama Whiplash—a different sort of horror film entirely. 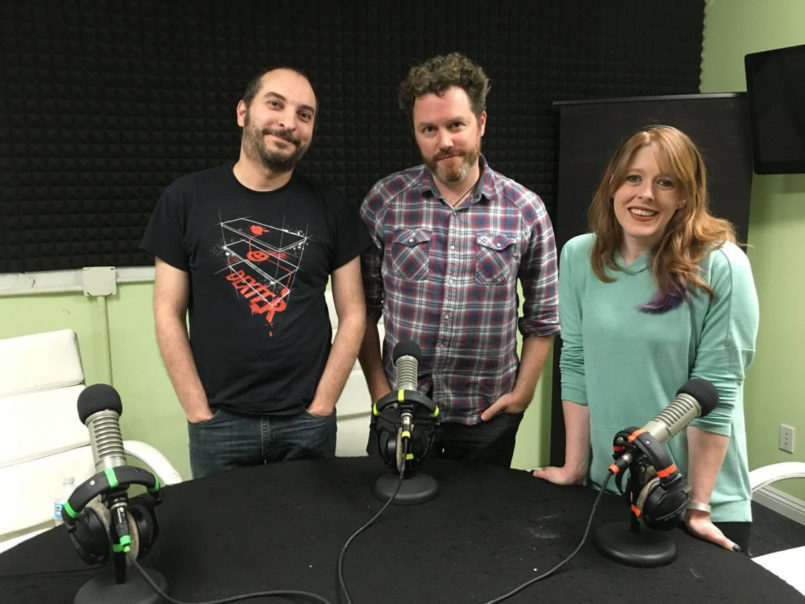 The Shock Waves format is effectively the same as Killer POV: McKendry, Kane, and Galluzzo start by discussing the ephemera they watched, read, or lived in the previous week. It’s a three-way conversation with so many dizzying cross-references and dissections that it could stand alone as its own podcast or, in many cases, be transcribed and handed out to film theory classes. From there, they bring in a guest affiliated with horror and dive as deep into the dark pit of obsession as possible.

In a trifecta, there’s a tendency for dynamics to take hold—one becomes id, one ego, one super-ego, for example. But in their pursuit of base sensations, McKendry, Kane, and Galluzzo are all id. In their healthy mastery of those subconscious shadows, they’re all three super-ego, too. They skip past the ego entirely, talking without the sense of competitive one-upmanship that can dominate too many geek conversations, in podcasts or otherwise.

It’s here that a valuable dynamic reveals itself: McKendry, a ten-year veteran of Fangoria Magazine (the Hustler of formative horror obsessions, with full-color gore effects and monster makeup as the centerfolds), casually and nonchalantly represents women in horror-geek culture with no comment or attention paid to the representation. Her presence is so matter of fact, it feels regrettably forced to even draw focus to it here. But when geek realms can easily become aggressively cliquey boys-clubs, and online factions of male aggression have very visibly mobilized to isolate or shut down female participants in these subcultures, McKendry’s role in this trifecta is too big of a relief not to gesture toward. It’s three friends sharing nightmares with deep, active mutual respect. It’s the way it’s supposed to be, the way it can always be. Within Shock Waves, favoritism, misrepresentation, and sexism in fandom are real-world nightmares already conquered.

Discussions of horror culture stay good-natured and friendly despite frequent disagreements, creating a welcoming and inclusive energy any convention or screening would die to cultivate. And without any clear intention to do so, these conversations tend to naturally carry the narrative arcs of a classic haunted house movie. Start with the entrance: things look casual enough as they arrive at a relevant topic (“We saw the new Blair Witch…”). As they venture further, what starts simple (expectations, different tastes, “It would have been cool if this happened” speculations) develops into what would sound like, to the unaffiliated, utter madness: deep analyses (the aesthetic and structural theories beneath the found footage subgenre), obscure references (the rumored Director’s Cut of Book of Shadows: Blair Witch 2), inside-baseball industry talk (how the cost of printing and advertising weighs against profits and expectations) and long, dark passageways into topics that even self-professed cinephiles may struggle to keep up with (the merits of Andrei Tarkovsky’s ’70s sci-fi Stalker, a cold and demanding film even by Soviet standards). The longer you dare to follow them into this all-consuming insanity, the more infected you become by their feverish enthusiasm, until you risk waking up one morning in a cold sweat with your Amazon Wish List mutated, your reading list quadrupled, and your Netflix queue maxed out.

This description may paint Shock Waves as advanced nerdiness, but “Episode 16: Jordan Peele and His Love of Horror!” offers an approachable entry point, not only to the podcast but to the entire notion of horror fandom. As half of the sketch comedy duo Key and Peele, his not-so-secret horror geek credentials constantly influenced the show’s darker directions, as seen in the viral “Continental Breakfast”’s Shining-inspired turn or the show’s hilarious use of zombies, alien invasions, and other genre tropes to make comments on America’s racial tensions. Judging by the trailer for Get Out, the upcoming horror film Peele wrote and directed, those allegories are still very active among his interests, which he enthusiastically discusses with the Shock Waves co-hosts. Comedy fans may be disappointed by the interview’s intentional lack of gags, but horror fans at any stage of obsession will respond to Peele’s thoughtful recounting of his young entrance points into the realm.

As Peele recalls, “When I was about twelve, some switch happened and I realized I’d been sort of stocking my imagination with all these awful images to the point where now I can kind of roll with them, have a familiarity with them. Instead of putting off seeing them…I’d go toward them.” Every horror geek listening, including that young boy who once fearfully tread the movie store aisles, nods along in recognition of that turning point where you decide to turn the demon that follows you into the devil you know.

So, what is it about horror? It’s the same as being an obsessive, capital-g Geek about anything: feeling like you belong, finding strength in numbers, knowing that someone has your back instead of having your back to something—and it can make all the difference between a haunted house and a haunted home. FL

The Jordan Peele episode is an endearing trip through one fan’s journey into consuming and creating horror, but for more advanced studies, these episodes—all of which can be found here—leave the ground floor and descend into instructive madness:

While the discussion with Alvarez is of note, the real attraction here is the co-hosts diving into this past summer’s Netflix phenomenon Stranger Things, going far beyond its surface influences to discuss what works and what doesn’t in the ultimate conversation on the show.

John Murdy, the creative director of Universal Studios Theme Park’s Halloween Horror Nights, pulls the curtain back to reveal the artistry and careful detail work otherwise lost on those who run screaming through haunted houses every Halloween.