Sanctuary: A Weekend at the House of Creatives Music Festival

With darkness encircling the nation, what better time to get lost in our southernmost major city?
Menu

Events
Sanctuary: A Weekend at the House of Creatives Music Festival

With darkness encircling the nation, what better time to get lost in our southernmost major city?

When I looked at the lineup for the inaugural House of Creatives Music Festival in Miami, I recognized only the headliners: The Flaming Lips, Crystal Castles, and Cold War Kids. The rest is just letters put together in combinations I’ve never seen. When I looked up some of the artists, I find a solid mix of DJs and experimental electronic stuff and proper bands.

I am the classic-rock-dad version of a twenty-nine-year-old woman. When I hear “electronic music,” Moby comes to mind. This isn’t to say that I’m not open to it. I just never, ever seek it out. Play is enough for me. Get off my lawn.

But it’s 2016, and apparently anything goes, including me to this festival. And why not? It’s not like I’m going to my first David Bowie show anytime soon. Or Prince. Or Leonard Cohen. (Fuck.) It’s also shaping up to be a long, cold winter in Chicago, with a presidential inauguration worthy of The Twilight Zone smack in the middle of it. I’m not about to say no to a November weekend in Miami Beach. Plus, the unknown in this situation is not whether Roe v. Wade will be overturned or if I should switch my birth control ASAP or how I’ll handle any of that without Gwen Ifill’s guidance. It’s telling DJs apart and figuring out how to get from the airport to the hotel. I can handle it. 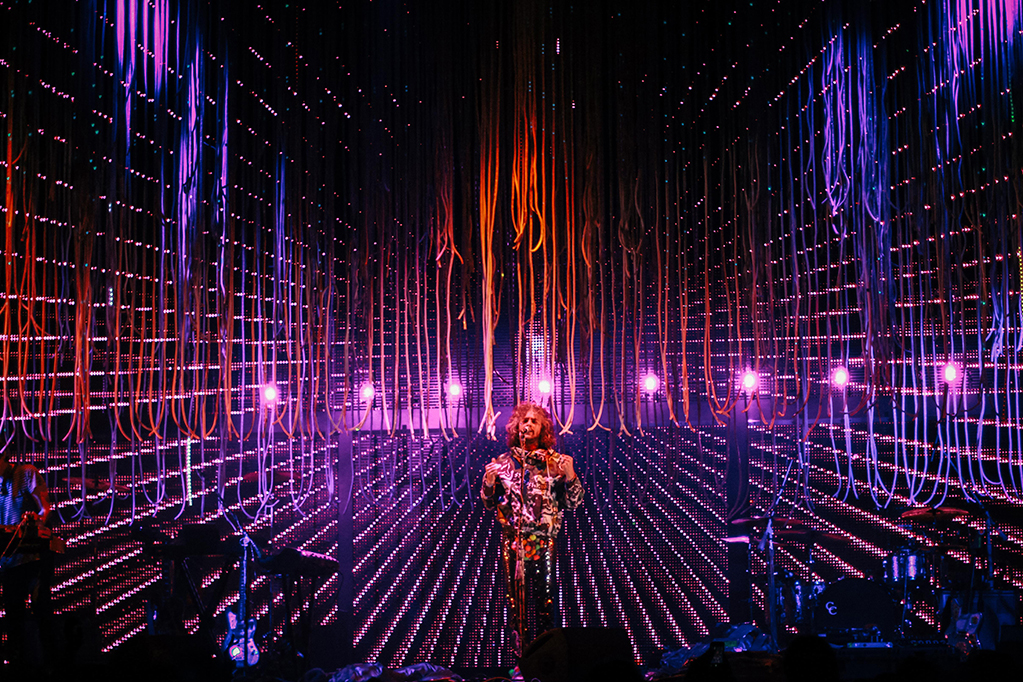 The Flaming Lips on stage at HOC / photo by Liliana Mora

My alarm goes off at 3:30 AM on Friday morning because my flight leaves O’Hare at seven. The upside: I have a bag of Pizza Goldfish for breakfast. I land in Florida for the first time in my life and stare at palm trees from the window of my cab. I spend an afternoon eating Cuban food and relaxing in the hotel where The Beatles first played for a US TV audience. I walk four blocks to the North Beach Bandshell for a music festival.

On the stage when I arrive is the band Grey 8s, from Wynwood, Florida. It’s early enough—5:45 PM on Day One of Two in House of Creatives’ first year—that their audience consists largely of other bands playing the festival. Despite that, or because of it, Grey 8s play their hearts out, more so than many headliners I’ve seen phone it in at other festivals. By the end of the weekend, their skillful, psychedelic, blues-tinged rock will emerge as a highlight.

After their set, I do a lap around the park. HoC already has things that more established fests do not. An important one is bathrooms in a dedicated building with walls and sinks. Another is a clear path from one stage to the other that takes less than five minutes to traverse. A third crucial one is seating. There’s plenty of open space at either stage for standing and dancing and what have you. I decided to do a couch-to-5K running program a couple of weeks ago, though, during which my knees laughed at me and then broke. I nearly cry from happiness as I walk like John Wayne over to the metal bleachers by the Bandshell Stage and sit the hell down. 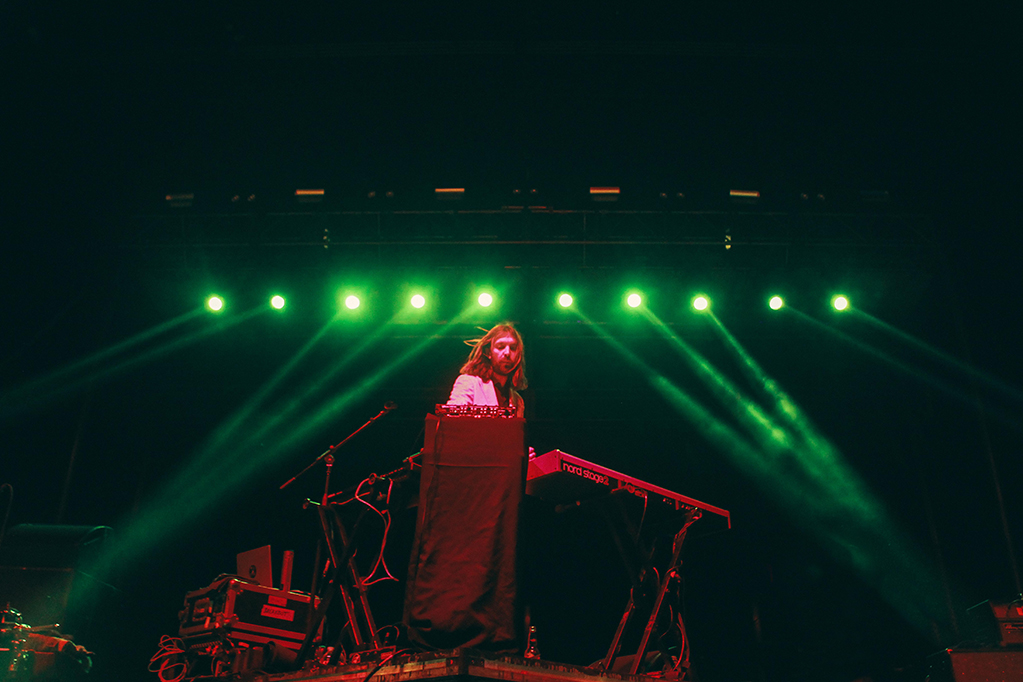 After my respite, I go to the aptly named Beach Stage to watch The Drums. That’s another great thing about HoC: they’re not obligated to name their two stages after corporate sponsors yet. The Bandshell Stage is at the bandshell. The Beach Stage is on the beach. The Drums have drawn a surprisingly small crowd of about two hundred people, but every single one of them seem to be really into the performance. When the band says goodnight, everyone yells for one more song. “They didn’t play my song,” one girl frowns while waiting for drinks.

Meanwhile, on the Beach Stage, Breakbot and his collective of incredibly talented musicians are on. The scene could not be more perfect: palm trees, beach breeze, tight funk, synchronized dancing by the guitarist and bassist, a male vocalist in a pink ensemble and a female vocalist in a white one. In the words of one Willard Carroll Smith, Jr., welcome to Miami.

Now it’s Saturday. I pretty much can’t walk today. I have no idea how I did this to myself, running in intervals of sixty seconds three times in a week, but here we are.

When I get to the Beach Stage around 5:45, Shigeto is on, playing drums along with prerecorded tracks. I want so badly to sit on the Bandshell bleachers, but I’m really into this. He abandons the drums for purely electronic music, and I like it. Watch out, Moby. 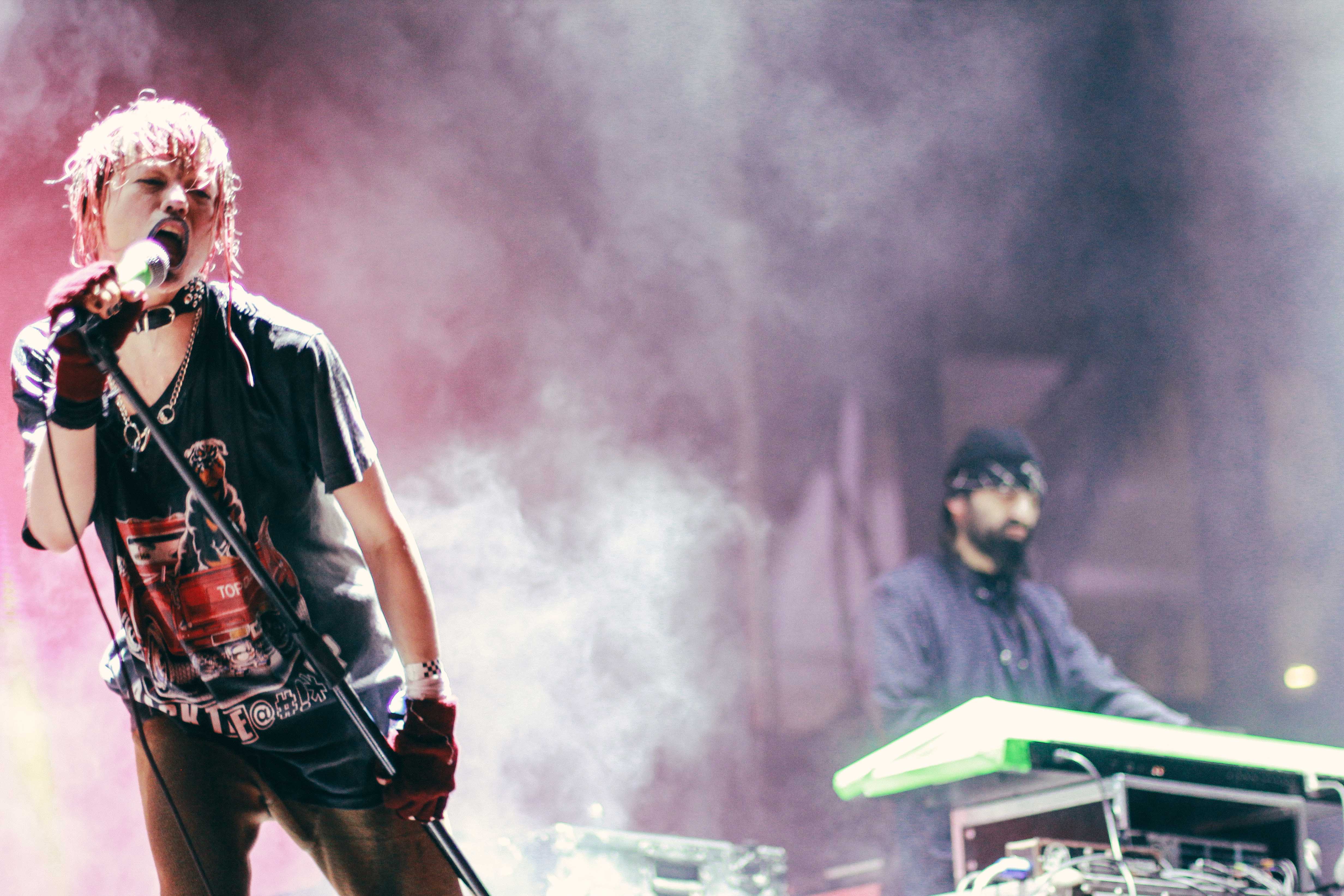 I meet up with my sweet, sweet seats and take in Florida native Millionyoung and then Small Black, a rock band from Brooklyn. Josh Kolenik, their lead singer and guitarist, explains that they drove from Georgia to do this, their eighteenth show in twenty-one days, and they’re cracked out. Whether they’re on actual crack or just very tired, it doesn’t show. They’re troopers and they’re happy to be here.

The Crystal Castles set is the first one to draw a crowd that I need to weave my way through. They were a tough sell for me even when Alice Glass was involved, and the new vocalist, Edith Frances, isn’t doing it for me. I’m happy to report that I’m in the minority, though, and the crowd is showing her a lot of love.

The number of sparkly attendees with hula hoops is growing, which means the Flaming Lips will be on soon. They play at every festival. You’ve probably seen them before. At the Beach Stage, Wayne Coyne comes out to relatively little fanfare, even though the Lips are by far the biggest name at HoC.

For a number of reasons that are obvious with a little research, I do not like Wayne Coyne. However, I generally like The Flaming Lips, whose music is frequently capable of moving me to tears—notably “Yoshimi Battles the Pink Robots.” This is the second song they play, and Coyne stops the band after the line “She’s a black belt in karate.” This is traditionally where the audience makes the karate noise from the song, but, just like last time I saw The Lips, the audience apparently didn’t do a good enough job. Coyne says something about how he knows it’s annoying to have the lead singer of a band tell the fans they’re not energetic enough. He does it anyway. He spends the rest of their set doing it. Every song is punctuated by him going, “Come on, motherfuckers! Come on!” Later, he dedicates “Space Oddity” to David Bowie, and a man behind me yells, “NO!” as they start playing it. I can’t tell which emotions are driving his reaction. 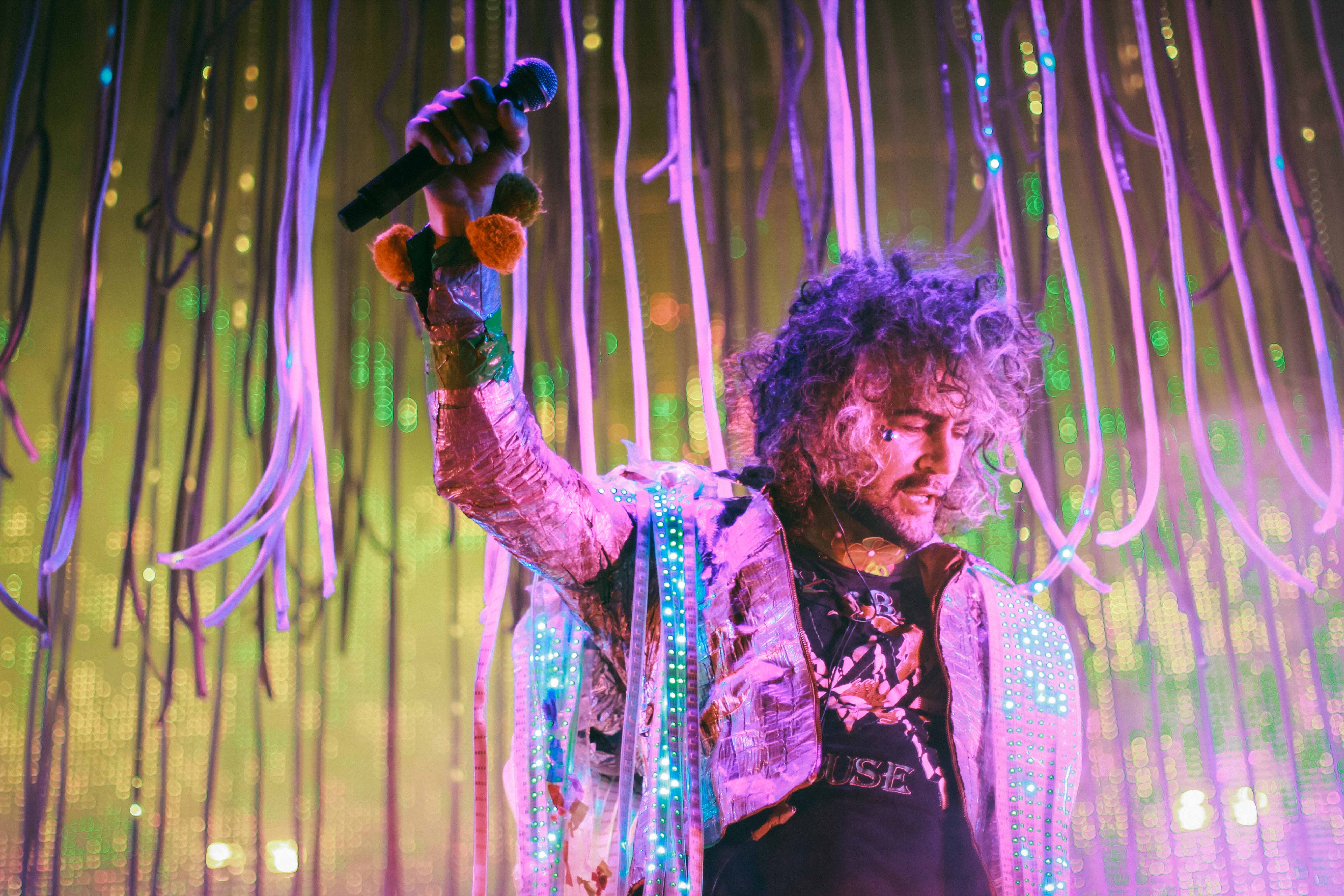 Before they do “Waitin’ for a Superman,” Coyne says that he gets sad if they do the song the right way, and he needs us to snap him out of it. I roll my eyes. Dude has been awfully demanding for a fifty-five-year-old man wearing a codpiece made out of neon pom-poms. But sure enough, when he sings, “It’s getting heavy, well I thought it was already as heavy as can be,” and his voice breaks, I begin to tear up. You got me, Wayne Coyne, you fucker. I can be mad at you for some things, but it’s 2016, and you’re feeling the same shit we are. It’s no longer an “if”—those evil robots won. It’s tragic. And that is precisely why I agreed to fly to Miami right before Thanksgiving on short notice to watch a bunch of bands I didn’t know at a brand-new festival. That is why it’s important that things like House of Creatives exist. While we’re waiting for Superman, we’re holding on best we can. This helps tighten our grip. FL