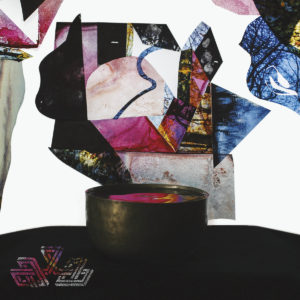 There are natural forces at work in the sound of Mind Over Mirrors’ Undying Color. Its meditative drones move forward with a sense of direction, their weight determining their course.

“Falling is the most natural way for objects to behave,” sings vocalist Haley Fohr (a.k.a. Circuit des Yeux) on the nearly-twelve-minute “Gravity Wake.” “And everything is falling at the same rate.” That sense of cohesion—of parts aligning, synchronizing along one path—defines the record.

Mind Over Mirrors began as a solo project of electronic composer Jaime Fennelly, and the root tracks of this new album were recorded alone, on synthesizer and his signature instrument, the Indian pedal harmonium, in a cabin in the Driftless Area of Southwestern Wisconsin. But it’s the collaboration that followed in Chicago that brings the record to life. Working with members of Califone, Eleventh Dream Day, Death Blues, and engineer Cooper Crain of Bitchin’ Bajas, Fennelly creates an ecstatic mood. Opener “Restore & Slip” is guided by the droning fiddle of Jim Becker, its sawing rhythms tugging against the pulse of drummer Jon Mueller, conjuring the sound of an Appalachian raga. The fiddle appears again on “Glossolaliac,” which positions the sounds of early electronic meditation music—which would eventually be labeled New Age—as a natural extension of folk music. Likewise, “Splintering,” with its singing bowls and romantic warmth, evokes the sublimity of German progressive group Popol Vuh, which found commonality in devotional global rhythms and the avant-garde.

While so often synthesizer music seeks to make the listener feel weightless, Fennelly finds beauty in binding, securing forces. As on 2015’s The Voice Calling, Fohr’s guest vocals add a bawdy wrinkle to Fennelly’s euphoric drones, and the addition of Janet Bean of Freakwater is a welcome one; both singers emphasize the human touch of Fennelly’s music. Bean returns for the album’s closer, “600 Miles Around,” reprising the album’s central theme: “Gravity makes for life,” she sings in a mantra-like repetition, “Feebleness is the center / Which does not move.”