The comic, actor, and podcaster explores life after infidelity in his new HBO series.
Menu

The comic, actor, and podcaster explores life after infidelity in his new HBO series.

I spend nearly every day with Pete Holmes, but we’ve never met. His podcast You Made It Weird, which finds him discussing spirituality and the meaning of life with a diverse array of guests, fills my commuting time. What’s most interesting about Holmes’s conversations is that it is apparent that he is on a journey, too, and that he aspires to a better understanding of himself and others through honest self-discovery.

He’s also the creator of the new HBO series Crashing, in which he has the unique opportunity to relive some of the most difficult moments in his life in a reimagination of his early days as a comedian and the disintegration of his first marriage. Ultimately, Crashing serves as a much better vehicle for Holmes’s humor—and ongoing journey—than did his brilliant, yet short-lived talk show, The Pete Holmes Show. The result is a compelling consideration of love, loyalty, religion, and the industry and community of comedy. Of course, there’s no shortage of thinly-veiled autobiography in sitcoms; comedians have been playing themselves since Lucy had Little Ricky. But what separates Crashing from the narrative trope is Holmes’s zealous curiosity about what connects us as humans, and what the hell we’re doing on this planet.

Crashing is about a fictionalized version of yourself who embarks on a spiritual journey of sorts, seeking wisdom from inside and outside of his community. As the real Pete Holmes, what kind of journey has Crashing itself been?

[The journey] is worthy of its own show. You know, being a comedian is like being a waiter. And if you’re a really good waiter, showbusiness does this interesting there where it gives you your own restaurant. It’s kind of like a different set of skills entirely. You’re good at serving food and now you have to cook the food and and make the food and pay for the food and manage the food and make changes to the menu, and have meetings about the font.

It’s been less of an adventure than the Pete on the show is going through, though; it’s not as dramatic. We were so excited about doing a show about starting out in comedy, as opposed to a lot of the wonderful shows that I love where the characters are typically already good at it. I get that. But we also show kind of the secrets, what’s it like the other twenty-three hours of the day.

In the show, Pete’s wife is having an affair and his discovery of that affair is the catalyst for his journey. You’re very open about this having happened in your own life. How have you used art in a therapeutic way and what challenges does that present?

Writing the show is a therapeutic exercise where you have to write not just for yourself but for the character of your wife and the guy who had sex with your wife, and it’s a real exercise in empathy and compassion to quietly consider what was it like for them. A lot of the feelings I had before the show was doing just that, trying to relate to whatever they may have been going through that would have led them to where they’re going. Life isn’t just “Oh, well they’re assholes, they’re bad people.” [My experience] was looking at it really hard and going, “I was a nice guy, I was a sweet guy, I tried to be a good husband the way I understood, but I can see now that I played a part in her leaving.”

“Just because something ends doesn’t mean it’s a failure.”

I couldn’t have been the person she wanted me to be, because I just didn’t know how to do that until she left, and then I kind of grew up because of that experience. I think a lot of people have that where they’re like, “They’d like me now!”

Something Dan Savage says, and my girlfriend Valerie says: Just because something ends doesn’t mean it’s a failure. We were together for six years in real life, and that’s how long we’re supposed to be together. I was twenty-two when I got married, and it’s kind of incredible that I shared six years with somebody. And just because it ended doesn’t mean that was a waste of time. That was a great time in my life.

Was it strange to relive that betrayal on camera? To relive your early struggles as a comedian?

I think doing the bombing was the worst. [Executive producer] Judd [Apatow] would have you do jokes and you’d do OK, and on the same take he’d say do it again—the same joke—and then people are laughing less obviously. Then you’d do it again, and they’re not laughing at all. You know it’s pretend, but it still hurts.

Some of the emotional stuff, again, as someone who has gone through something similar, you’d be surprised—you think it’s going to be unpleasant to reenact, but in the end you feel better for it. 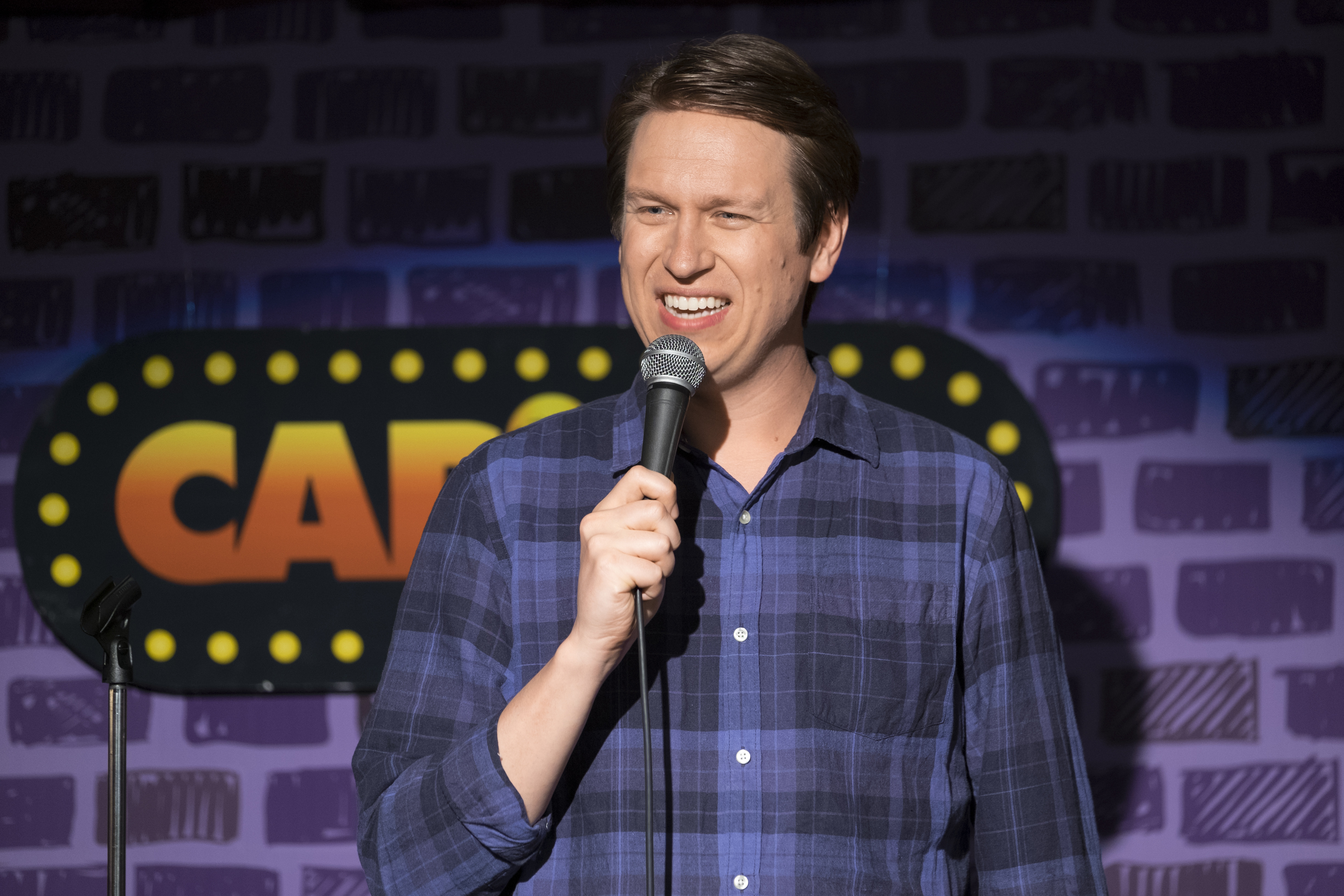 photo by Macall B. Polay

There’s an interesting parallel here in that you’re launching a new show and you’re recently engaged. How do your first marriage and first show inform your understanding of how to manage the second of each?

The first marriage informs the second one in a huge way. That’s when I really figured out who I was as a person—and getting a better sense of, not how you should act to attract a partner, but of who you really are and [how you] can find someone who loves that. So, luckily with Valerie she really loves me for who I am and I love her for who she is. And that includes enjoying the comedy lifestyle. I am randomly anxious for no reason, kind of dwelling on something, and she’s a loving and nurturing person.

I also think that [after] getting engaged, I felt relief. I had this bad experience of getting married the first time, and since I’ve gotten engaged I’ve felt like the cloud’s lifting in this way I didn’t really expect. I’m not really a big believer in like, some sort of magical moment, but getting engaged has made me feel even more free from the trauma.

Something I learned from the first show going to the second show, is all about inner office politics and making sure people felt seen and heard. At the end of The Pete Holmes Show, I was shocked to find out that morale wasn’t great all the time. Some people felt overlooked. [It would have been better] if we had been more aware of how to run an office.

Spirituality is at the center of Crashing, something you talk about a lot on your podcast You Made It Weird. In a notoriously secular industry, is it a challenge to maintain a conversation about spirituality?

In the past, networks were hesitant to do anything with it—like a cocktail party where you don’t talk about politics or religion. I think what gives our show hope and stake and a bit of soul is that Pete is a religious guy and is trying to hold on to that, and normally if Pete weren’t religious, this show would be about a guy whose wife leaves him and then Pete goes off and has sex with a bunch of people, gets drunk, and goes through a spell with cocaine… It’s way more interesting to have a guy have his wife leave him, and then he doesn’t know what to do. He never wanted to have sex with another person, he doesn’t want to get drunk, he doesn’t want to do drugs. I really wonder what he’ll do. What part of his soul will he maintain and what parts weren’t him to begin with? 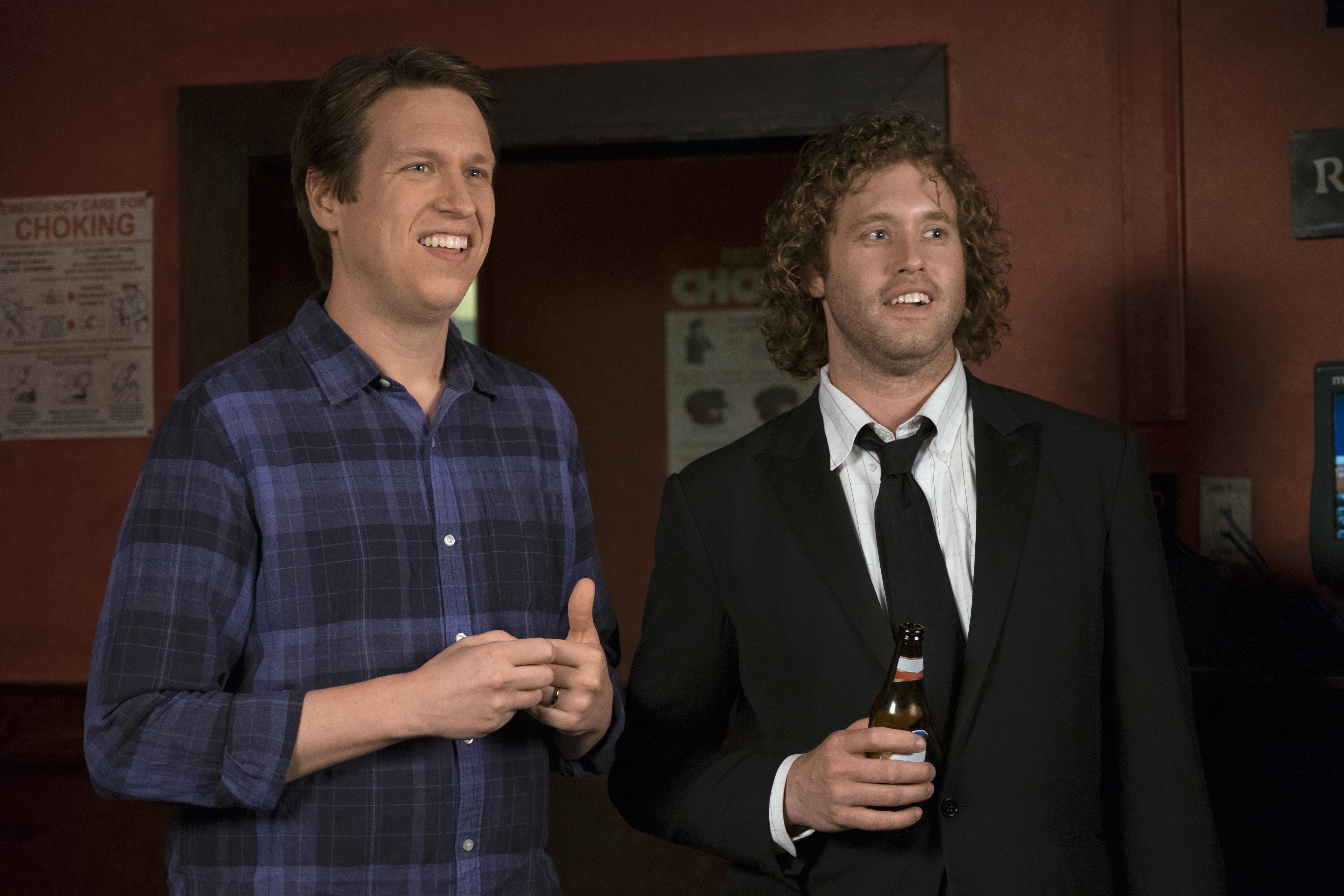 Holmes and T. J. Miller in Crashing / photo by Macall B. Polay

From the outsider’s perspective, comedy appears to be a very supportive community. Is that an accurate interpretation?

I think that’s underreported in standup. It’s like working in an office or eating lunch in high school. You almost live in the world it creates to a certain extent. I don’t think it would have been impossible for me to find bitter people who don’t help each other and stab each other in the back. That just wasn’t my experience. In real life [when] my wife left me, one of the first things I did was, T. J. Miller flew me to Pittsburgh, and I stayed with him in his hotel for a week while he was shooting a movie, just so we could be together, and he took me to shows. He was smart enough to know I needed to be performing—it’s a good antidepressant. John Mulaney was the same way. A lot of comedians really do treat each other like members of their family.

Podcasts have provided this venue for longform investigation and discussions. You Made It Weird is typically around two hours, and I wondered if there’s something cathartic about slowing down and talking to someone for that long, especially someone whose typical public conversations would be ten minutes with a commercial break.

That’s exactly it. It seems like a naturally occurring response to Twitterization and late night [shows]. I was so happy to do Charlie Rose—someone who inspired my podcast. Even when I was young, those were the conversations I liked. People have asked if I’ll keep doing the podcast since [Crashing] got picked up. I’m so fortunate to have the excuse to talk to somebody in a small room where your phones are off. Why would I ever want to stop trying to connect? FL