The LA quartet has crafted one of the most pleasurable sounding records you’ll hear this year, the idea of personal liberty permeating the record’s warm grooves.
Menu

The LA quartet has crafted one of the most pleasurable sounding records you’ll hear this year, the idea of personal liberty permeating the record’s warm grooves. 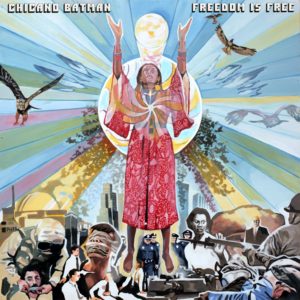 On the eve of the presidential inauguration, Los Angeles quartet Chicano Batman released a cover of Woody Guthrie’s “This Land Is Your Land.” Leaving aside the fact that it was commissioned for an ad designed to sell whiskey, it felt like a charged move. Here was a group of hispanic men in vintage suits—frontman/organist/guitarist Bardo Martinez, drummer Gabriel Villa, bassist/vocalist Eduardo Arenas, and guitarist Carlos Arévalo—singing about inclusion in the language spoken along much of the proposed path for President Trump’s border wall. “Esta tierra es para ti y para mi.” Even without utilizing Guthrie’s most controversial verses, it was a stand; the notion that there is room for you and me shouldn’t be a radical one, but it is.

That spirit carries into Freedom Is Free, the band’s debut for ATO Records and third album overall. “You got your guns up on display / But you can’t control how I feel, no way / ’Cause freedom is free,” Martinez sings over a gentle bass boogie on the title track, the guest vocals of Mariachi Flor de Toloache shimmering behind him. Like the best protest music, it is also propulsive, lively, and sweet.

The idea of personal liberty permeates the record’s warm grooves, which draw from psychedelic Chicha, Tropicália, and most abundantly, mellow brown-eyed soul, positioning the band somewhere between Sly & the Family Stone, Os Mutantes, and an East Side Story collection of lowrider oldies. Working with producer Leon Michels (The Dap-Kings, The Black Keys), the band has crafted one of the most pleasurable sounding records you’ll hear this year, each element—from the bubbling organs to the fuzz guitars—applied with a generous dose of reverb. Songs like “Angel Child” perfectly demonstrate the wealth of tone at the band’s disposal, with layered, lush harmonies coursing over fluid bass and Stereolab-style leads.

But Chicano Batman has always been a blast to listen to. The biggest progression here can be found in the group’s pointed lyricism. On “The Taker Story,” Martinez explores the history of colonization, citing the “mass killings and mass graves” and the “globalization of slaves” wrought by those he terms “takers.” Even more heartbreaking is “La Jura,” where Arenas recounts the details of a friend killed by police, singing mournfully “Los que deben proteger / Hacen lo opuesto / Matan inocentes.” (“Those who should protect / Do the opposite / They kill innocents.”) Chicano Batman have long excelled at making a specific kind of party music, but their jubilant spirit on Freedom Is Free is rooted in defiance and declaration: “Freedom is free—and you can’t take that away from me.”