The Shins’ fifth record exists in a weird, pleasing limbo between Ariel Pink and The Magnetic Fields.
Menu

The Shins’ fifth record exists in a weird, pleasing limbo between Ariel Pink and The Magnetic Fields. 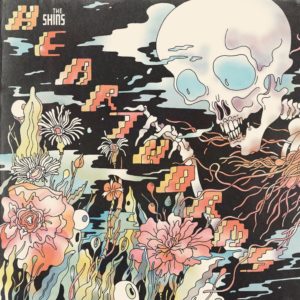 On Heartworms, The Shins’ James Mercer tries—and thankfully fails—at burying a series of excellent songs under twitchy arrangements that, at times, offer as much emotional connection as a bucket of Legos.

But Mercer is a songwriter at heart, not a producer, and no amount of obfuscation can disguise that. His voice is at the center of Heartworms, the band’s first album since 2012’s Port of Morrow, and the resulting record ends up existing in a weird, pleasing limbo between Ariel Pink and The Magnetic Fields.

With each song, Mercer offers a choice: embrace the seeming disconnect between the vintage Technicolor production and his graceful crooning, or reverse away quickly from the garish glare. “Name for You” opens the album and comfortably cruises along, but the vocal melody—and especially the bridge—is show-stoppingly beautiful. It dances close to the AOR line and the chorus gently propels itself. But once the confusion settles, the aftertaste can be a little underwhelming.

Mercer is no stranger to confusion, and he’s cycled The Shins through numerous lineup changes, so to be taking the mantle solely on his shoulders once more must feel weird. It’s this sense of being off-center that mostly comes through these songs. “Painting a Hole” shamanically wriggles like Animal Collective and has evocations of The Beatles (check that title, for starters) in their psychedelic phase. This could be brilliant, but again the proposition doesn’t quite deliver. In this instance the drum sound and production actually do the heavy lifting, but the melody misses its mark, leaving you with a rich, satisfying groove that perhaps goes on a bit too long.

But it’s the simple moments that keep Heartworms above water. The presumably autobiographical “Mildenhall” traces the launchpads of his career, as Mercer recalls getting a Jesus and Mary Chain tape in childhood and a guitar from his dad. A thrummed acoustic guitar (and a simpler sound palette that includes rain sounds, a few soft keyboard pads, and some gentle percussion) make it feel more approachable than the album’s busier songs. Mercer offers the listener an invitation to connect, to step into his shoes, and the storytelling feels authentic.

James Mercer has certainly made better albums, but Heartworms occupies an interesting space—one where an earnest songwriter can delve into plastic pop production and ’70s radio rock. For this approach alone, it stands out from the pack.