It was a festival filled with dualities: that Charles Bradley is not a lone eagle, that J Mascis can blow out an amp and shred on acoustic within a matter of hours, that the pleasant Pacific Northwest can still get really freakin’ hot.
Menu

It was a festival filled with dualities: that Charles Bradley is not a lone eagle, that J Mascis can blow out an amp and shred on acoustic within a matter of hours, that the pleasant Pacific Northwest can still get really freakin’ hot.

It’s Pickathon: the annual music festival in the pastoral idyll of Pendarvis Farm in Happy Valley, Oregon. This is what Woodstock was supposed to be.

Instead of a muddy mob of 500,000, it’s a very relaxed collection of 3,500 (roughly), who casually wander from campsite to stage after stage, throughout the woods and rolling hills of this sweltering, but otherwise comfortable setting. As temperatures reached over one-hundred degrees on the first day, setting up camp was the customary sweaty affair, not for the literally weak of heart. I entered this event slightly prepared to hear that someone, hopefully not me, would succumb to the heat. But by evening, the temperatures decreased to a tolerable eighty degrees and audiences could focus on the music, instead of scouring the woods for a flat-ish spot to pitch a tent. Let the transcendent moments commence. 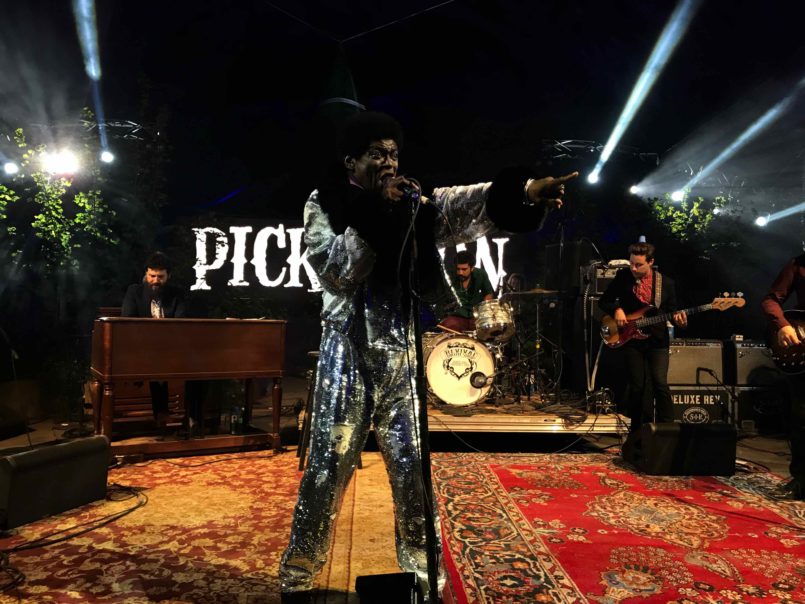 For those who did brave the heat for an early entrance, the reward was Charles Bradley’s evening set. Resplendent in a silver sequin suit with a fur collar, a princely purple, wide-collared shirt, completed by a jewel-encrusted skull belt buckle, Bradley, backed his Extraordinaires, delivered unadorned and uncomplicated classic soul.

The one-time James Brown impersonator, even as he nears seventy and having survived a recent cancer scare, relies on the purity of his unimpeachable delivery as he sings of the sadness and failures of society, love, and self. It’s impossible not to be moved by the sincerity of his deliveries—in particular, when he covered Black Sabbath’s “Changes,” altering the chorus from “I’m going through changes” to “I’m going to change it,” punctuated, classically with a Brown-like scream, in which he uses his whole body to create the sound. 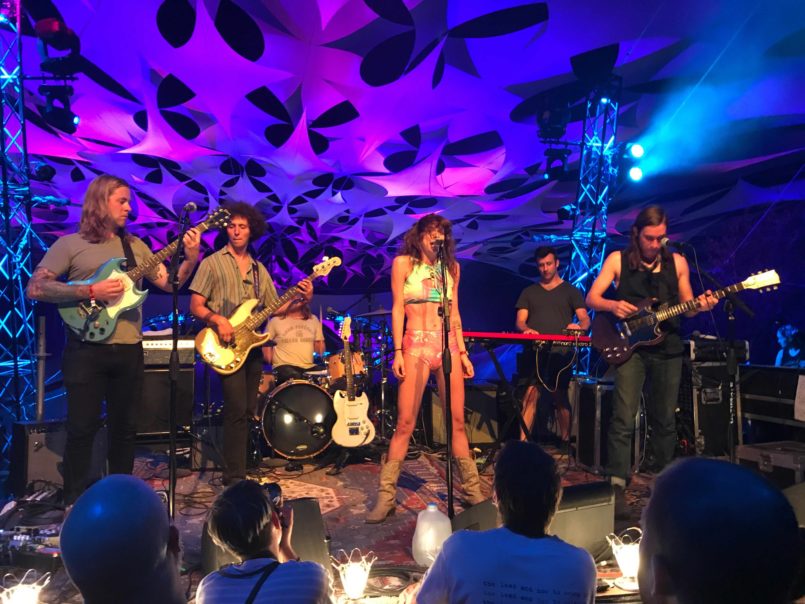 This is followed by Sweet Spirit, the first of a string of bands I can thank the festival for hipping me to. This thrash-y glam rock outfit from Texas fronted by Sabrina Ellis, rocking skin-tight hot pants and a halter-top and backed by a scraggly bunch of rockers, channels everyone from Hedwig and the Angry Inch, to David Johansen, David Bowie, Kate Bush, and Debbie Harry in theatrical swagger.

Luke Bell’s group of stoic, stone-faced characters from “down South” play stripped down country folk, but had trouble getting through issues with the sound and feedback in the Galaxy Barn—a homey room that feels like it came off the gatefold of Neil Young’s Harvest album.

On Friday, the temperature, while still relatively molten, had at least dipped into the nineties. The festival’s programming has become increasingly free-form, with lineups that vary radically from set to set. As an example, on the Treeline Stage, LA’s KING, wearing all white outfits, breezed through a set of smooth R&B grooves. The three-piece highlights vocal harmonies by Amber Strother and Anita Bias over Stevie Wonder–style keyboard funk created live by Paris Strother, whose hands dance across several banks of keyboards, creating a glistening accompaniment. This set was a great introduction to their laid-back style, performed outdoors, while their later set in the Galaxy Barn the next day, was a sweatier and more funky affair. 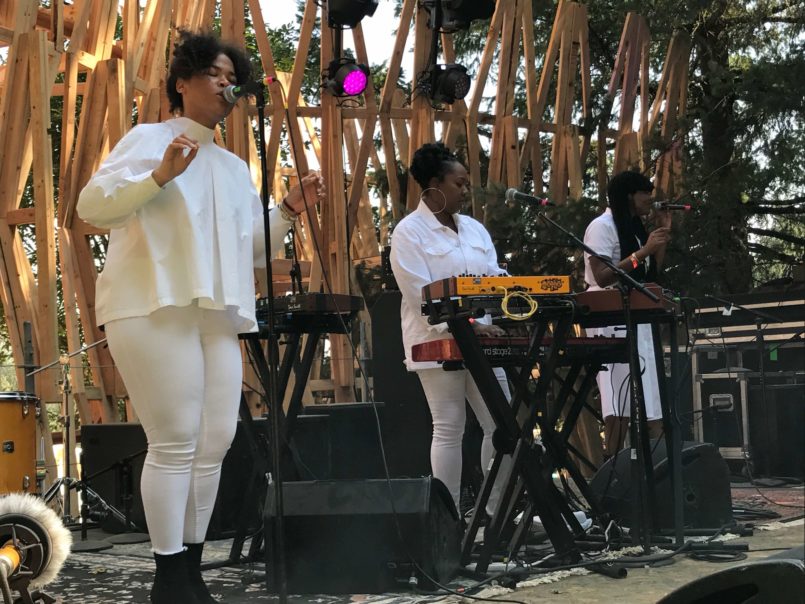 Originally, Pickathon was a roots and acoustic festival, but that is more of a minority aesthetic at this point. Billy Strings, on the main Mt. Hood Stage, represented, though, conjuring a Zeppelin-esque psych bluegrass. The quartet of banjo, mandolin, guitar, and bass seemed to struggle a bit with the size of the stage, but compensated with acoustic pyrotechnics.

Back in the Woods, William Tyler, served up another of the festival’s treats. Backed by the band Megafaun, Tyler cruised through a set of cinematic guitar instrumentals pulling from an Americana that both Bill Frisell and Aaron Copland could appreciate.

As evening came, I took comfort in one of the many hammocks suspended between the trees and over the hay bales that serve as seats in the Woods’ natural amphitheater.

It didn’t take long, however, for the superfuzz power of Meatbodies to pull me up and down to the stage to witness their total psych rock blowout. Dueling lead guitars traded spaced-out shredding on top of the pedal-to-the-metal propulsion of bassist Kevin Boog. 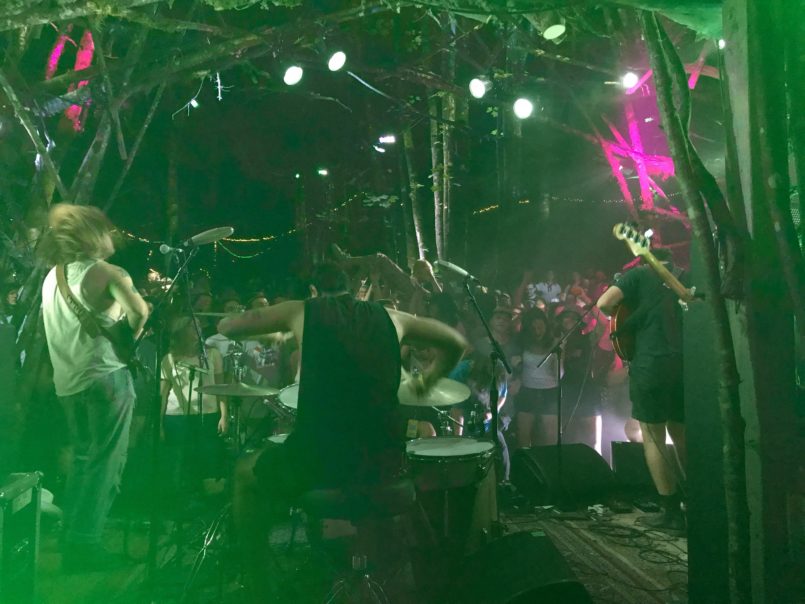 Each band plays at least twice during the festival, usually a day apart. This creates something unique about Pickathon, in that the different stages and times often lead to a different experience. Certain bands do better inside than out; some are better suited for night than day, and comparing is always interesting. But it also means that the bands, when not playing, wander about the farm, checking out other bands just like everyone else. It’s another way that the usually concrete line between performer and audience is more porous at Pickathon.

Charles Bradley’s second set came after Meatbodies. The band tore into psychedelic funk, lit up by fuzzed out guitar leads that were noticeably absent the night before.

Clearly, the energy of Meatbodies’ set, coupled with that of the audience and the setting in the woods, inspired the band to take it to another level. While in Bradley’s Thursday night set, he was the star, here, the band, literally letting their hair down, showed their power. The set and sound was deeper, darker, more psychedelic. 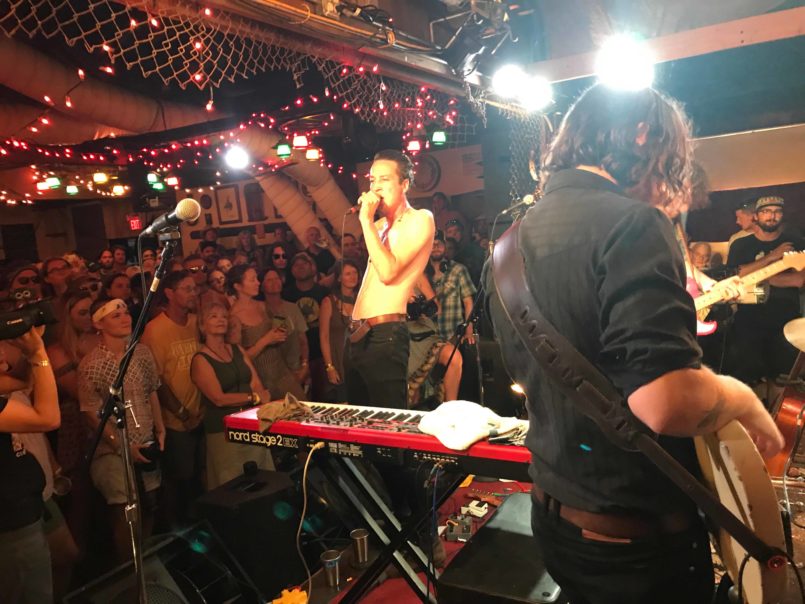 Saturday rolled around and brought Marlon Williams to the Galaxy Barn for a mid-afternoon set. The New Zealander, singing with a high, vibrating falsetto—like Roy Orbison on NyQuil doing murder ballads—began with plaintive and languorous country, growing darker, more evocative, and heavier as the heat intensified and sweat poured over his face before he peeled his shirt off and raised the roof with an ominous gospel blues à la Nick Cave.

Afterward, comparing this set to one he’d played outside on the Starlight stage the night before, Williams said the band was surprised at the difference in the experience. “Last night, we were going on after 10 p.m. We figured it’d be a rocking set, but we slowed down and it ended up pretty mellow. Today in the barn, it felt like a European nightclub.”

Steve Gunn in the Galaxy Barn was another eye-opener. Leading off on acoustic accompanied by James Elkington on electric, Gunn trades in alternate tuning drones, chiming guitars, and sparse vocal melodies that maintain intensity, without emotional baggage. His delivery is stoic, yet captivating. Elkington’s guitar playing at times recalls Robert Fripp’s work with Bowie and Eno, a melodic buzzsaw that explores the sonic rafters. 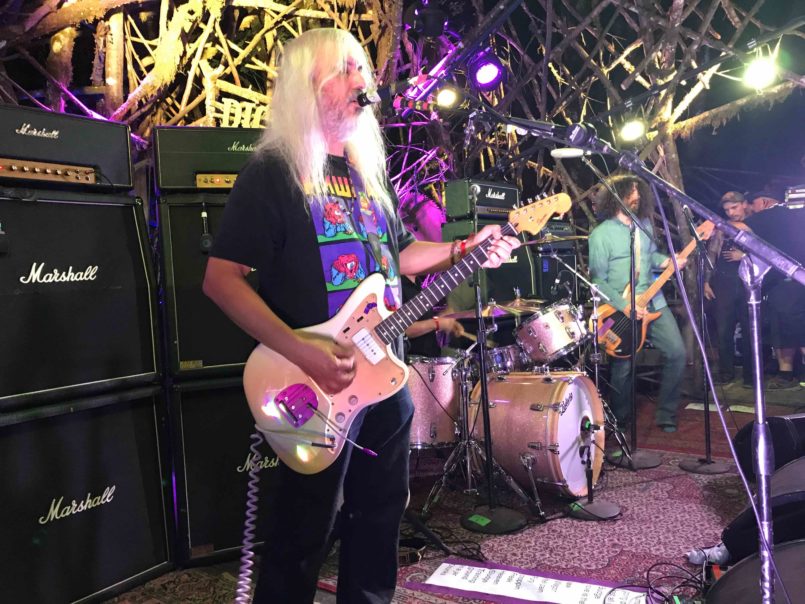 Gunn also commented on the festival and the different sets he played. “In the barn, it’s more intimate. There’s a stronger connection here. I just watched one of my favorite guitarists (J Mascis) in a solo setting and now we get to hang out and have guitar nerd conversations.”

Saturday night didn’t disappoint. Dinosaur Jr. seemed completely at home on the Woods stage. Surrounded by furry trees and branches, J Mascis blew a hundred-watt Hiwatt amp on the first song, but given that he had two other Marshall stacks behind him, it was OK. Their set began with a mix of newer songs with classics, but in the second half of the set they took it to another level, digging into a tarpit of heavy goo and catalogue gems like “Budge,” “Start Choppin’,” “The Wagon,” “Freak Scene,” and “Sludgefeast,” shredding into the night.

This was a perfect lead into Ty Segall’s ultra heavy set of stoner rock freakouts back at the Starlight Stage. While the dual-assault of Segall and Emmett Kelly on guitars, along with Mikal Cronin’s low-end thunder, set the tone, Ben Boye, seated behind an electric piano, was centerstage and made it all work, despite creating the least amount of sound. There was an unforced cool to his presence amongst the sonic insanity swirling around him like frogs in a blender. Every song sounded like a gloriously trashy finale, but each led to another, and another. In a sense, that’s what the entire festival feels like. 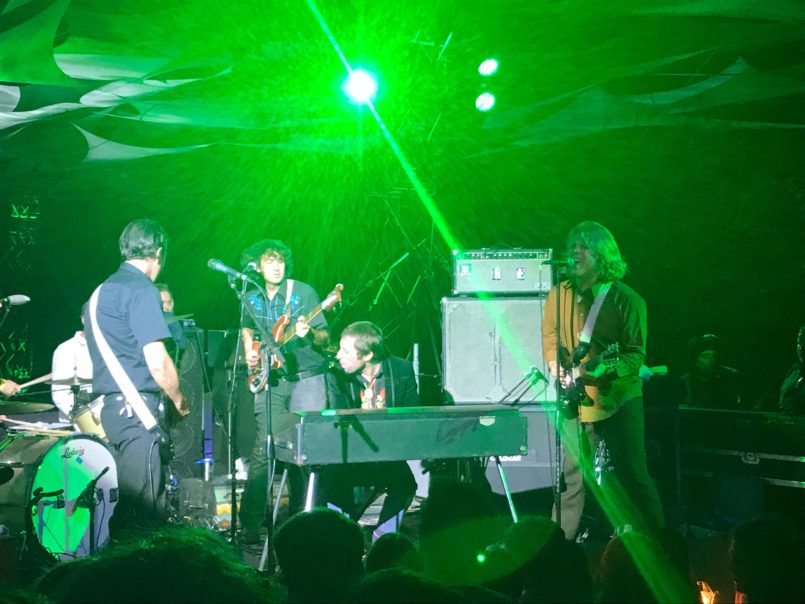 Moments of fatigue are overcome by moments of exultation and transcendence brought about by the music, crowd, and experience. A half dozen times a day you think you’re done, your legs are killing you, your back is aching, and you’re covered in dust. But then you find yourself sitting outside the Galaxy Barn at 1 a.m., waiting for another band while a DJ spins heavy world funk, and you look around and everyone is dancing, beaming smiles, and you realize you’re at the best party ever and everyone there knows it, too. So you go inside the barn to catch yet another band.

Xenia Rubinos performed an electrifying set of genre-bending, electro-dance jams on the main stage that showed both a dancehall stage presence as well as the ability to control and enthuse a crowd. Big Thief, on the Treeline stage, alternating between twee delicacy and unnervingly raw emotion and noise, provided one of the festival’s most potent emotional moments. Frontwoman Adrianne Lenker either summons or quits trying to contain a hornet’s nest of emotions, allowing them to come out like something from the exorcist. 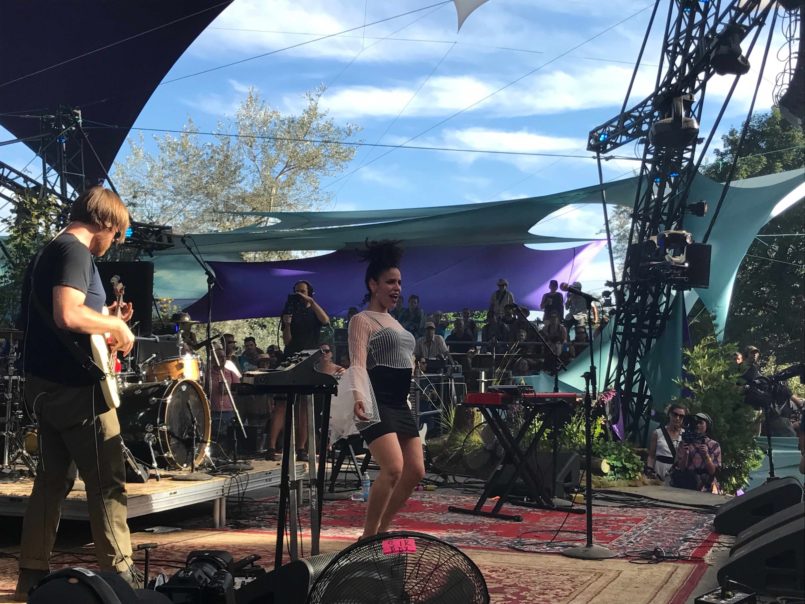 Then it was Dungen, in the perfect location given that their name translates to “The Grove.” Gustav Ejstes alternated between keyboards and flute for proggy space rock jams that recalled Yes, ELP, and Stereolab.

The sun had gone down, it was dark again, and the band seemed completely in the zone, which Ejstes confirmed when he addressed the crowd, “I think we like the same shit!” he yelled. “Right now, we’re connected!” Then launched into another jam, jumping between instruments before settling on tambourine, which he thrashed—losing himself to the moment—until it lay in shatters. It was a fitting note to go out on. FL