For anyone who didn’t want to be at festival so soon after the Vegas shooting, ACL offered full refunds. But the festival didn’t back down—and the result was a weekend of mutual love and appreciation.
Menu

For anyone who didn’t want to be at festival so soon after the Vegas shooting, ACL offered full refunds. But the festival didn’t back down—and the result was a weekend of mutual love and appreciation.

The trepidation fans felt leading into the sixteenth Austin City Limits Music Festival, with the horrible attack on Las Vegas’s Route 91 Harvest Festival still fresh in our minds, was real and not merely a construct of the gallons of Internet ink spilled by the media about the shooting. The festival organizers warned fans event security would be ratcheted up TSA-style this year. Local police reviewed and adjusted security procedures just prior to the October 6 kick-off in the wake of the shooting. Things looked a bit grim compared to past years.

Predictably, there were festival goers who struck a defiant tone, carrying signs sporting slogans like, “END MASS SHOOTINGS, WE’RE NOT AFRAID OF YOU.” Concern over another attack was tempered, thankfully, by a determination to have the best possible music festival specifically because Las Vegas happened. No one was going to let a gun-toting maniac spoil the crown jewel of Austin destination festivals. 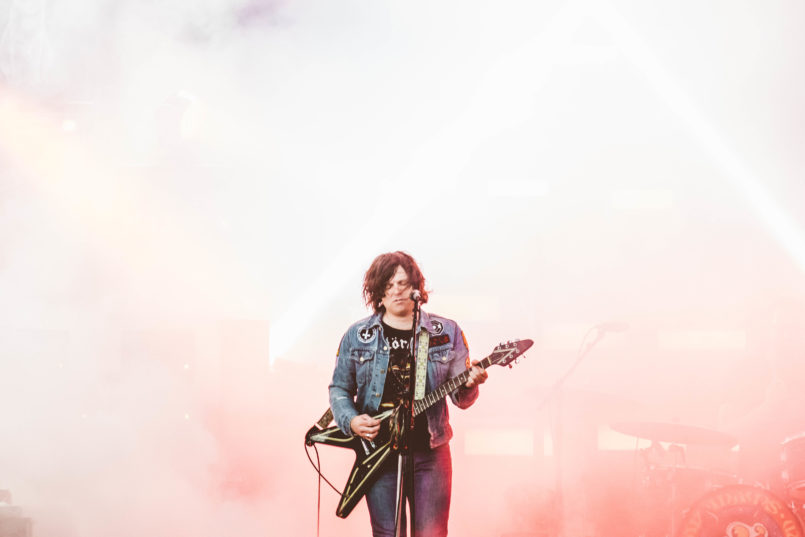 It is true that there was an element of defiance in fans’ moods, particularly on day one, but overriding that rebellious Texas pride was an amount of tenderness, love, and respect people showed each other. ACL felt lighter and, frankly a lot more fun as staff, artists, and fans went out of their way to be courteous and friendly throughout the three-day event. That small, noble intention is all the festival needed to overcome fears of a copycat disaster.

The defining moment came Saturday, just before 7 p.m., when organizers sent social notifications to look to the sky for a special aerialist event by Red Bull. What ensued was four-man parachute jump into Zilker Park as Tom Petty’s “Free Fallin’” blared from every speaker on the grounds. The entire park spontaneously took up the chorus until the song was over and the skydivers were safely on the ground. It was enough to bring a lump in our throats.

Moments later, hometown heroes Spoon hit the Miller Lite Stage. Clearly the band belonged in the stage’s headlining slot Saturday, owning the crowd from the first notes of “Do I Have to Talk You Into It” off this year’s Hot Thoughts. Britt Daniel’s lyrics felt like the homecoming it was for the band, who has been on the road since the new album dropped. (“Here we go down a long dark road / Same place where we used to go…”) 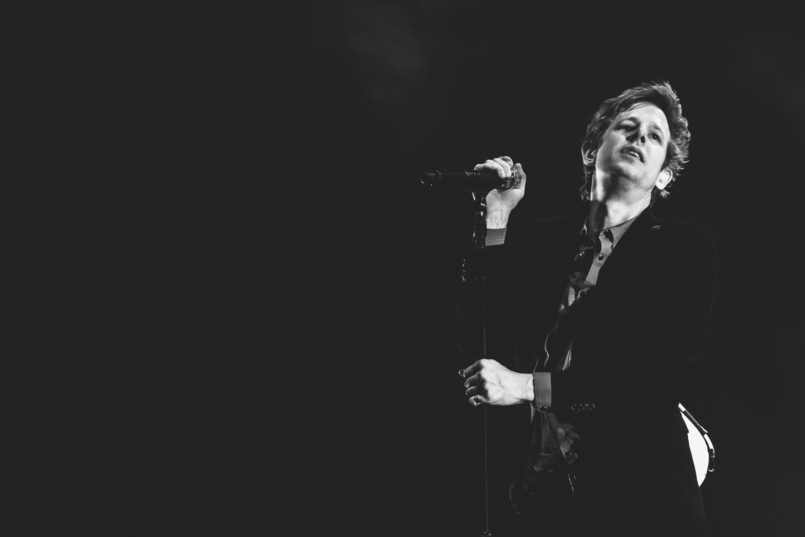 The ensuing hit-filled set list was a celebration of Austin’s most successful touring rock band. Spoon gems “I Turn My Camera On” and “Don’t You Evah” precluded the centerpiece of the performance—an incendiary version of arguably the best song off the new record, “Can I Sit Next to You.” The band’s newest member, Gerardo Larios, stepped out from behind his keyboard and took up his axe next to keyboardist Alex Fischel at the edge of the stage to play lead as Britt intoned his lyrics into the mic at the midpoint of the performance, signaling a string of hits to come. It was magical watching Larios slay in front of his family, some of whom had come a long distance to see him perform. For the second time in less than an hour, we found ourselves with a lump in the throat, overcome with emotion yet again.

Spoon usually winds up shows with anthem “The Underdog,” but they took the ACL Festival crowd even higher with “Got Nuffin” rising out the heavy guitar fuzz left behind, driving fans into yet another frenzy, with drummer Jim Eno’s unmistakable thump of a beat that only he seems capable of producing. The set ended with “Rent I Pay” and Britt laying spent on the floor of the stage, indicating that he and the band left nothing in the tank as the formidable Spoon machine claimed the superlative performance of the festival.

Friday’s lackluster, headlining JAY-Z set was tempered by a thoroughly entertaining performance by The Lemon Twigs at the same stage as Spoon. Led by young Long Island brothers Brian and Michael D’Addario, who share vocal, drum, and guitar duties, The Lemon Twigs delivered the most irreverent, happy set of the day punctuated by high leg kicks and a flair for humorous stage antics to go along with their pop-rock sensibilities. 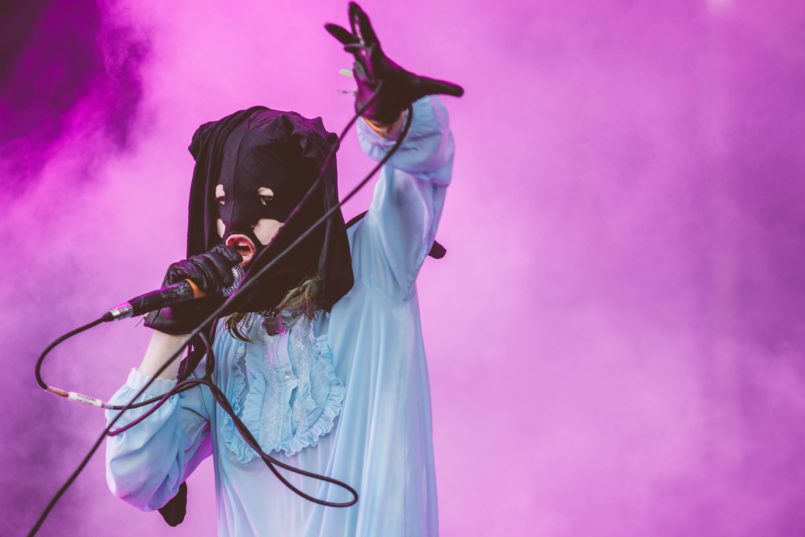 Crystal Castles followed on the Honda Stage, up the hill from Miller Lite, with the most bizarre electro-trash performance ever. Wearing torn black leggings as masks, that became unbearably hot in the humid weather, new singer Edith Francis doused her head with water before revealing her smeared, grotesque red lipstick. Shock value is the currency Crystal Castles deals in spades.

Later, on the Barton Springs stage, Solange introduced the ACL audience to her brand of stylized rhythm and blues accented by a dose of bass funk and horns. With dramatic, modernist, monochromatic museum-like set designs behind her swathed in red lights with a single giant red dot on a white backdrop, Solange made clear her choice of color theme.

While it’s hard not to compare her vocals to Beyoncé, Solange sings just as beautifully, presenting a carefully choreographed performance in front of a raft of musicians and dancers. In the context of a mainstream music festival her modernist art and music show might not have been the most exciting performance of the day but it certainly stood out among other acts. The opportunity to see her headline on her own is one worth hoping comes along soon. 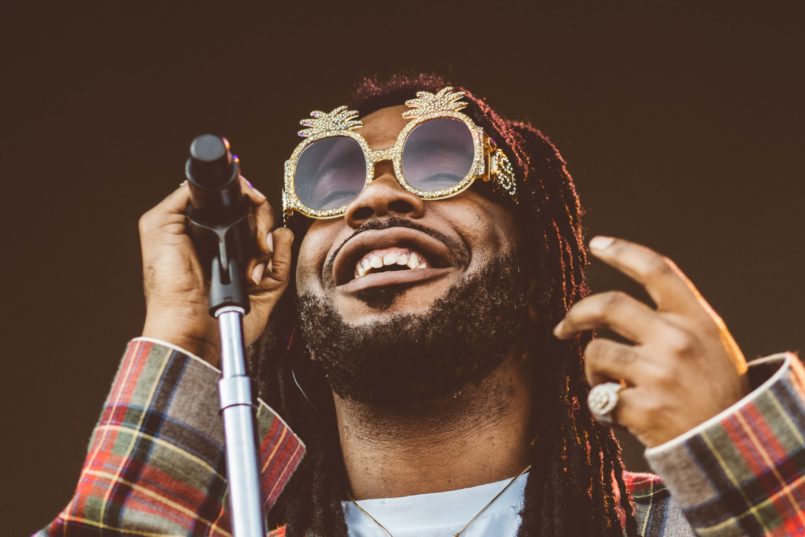 Spoon may have had the set of the festival on Saturday, but another celebrated Austin band, The Black Angels, hit the Barton Springs stage a couple hours before that seminal performance putting on their own sublime psychedelic freak out for fans.

What was remarkable about The Black Angels on Saturday wasn’t their incredible music but the fact that drummer Stephanie Bailey bounced back from emergency oral surgery on Thursday night (TBA’s Friday Late Night Show at Emo’s was cancelled due to the surgery) to play an hour-long show while her mouth must have been throbbing to the insistent, droning beat that is the group’s hallmark. Bailey proved she’s not only a grossly underrated musician but the toughest member of the lords of neo-psych rock.

As with recent festival performances, The Black Angels mixed songs from their latest effort, Death Song with older material rolling out fan favorites “Bad Grease” and “Bad Vibrations” alongside new tracks, “Comanche Moon” and “Currency.” Judging from the swelling crowd size and enthusiastic response, they nailed it—despite being in a daytime slot that didn’t allow the band to show off Bob Mustachio’s mind-bending visuals. 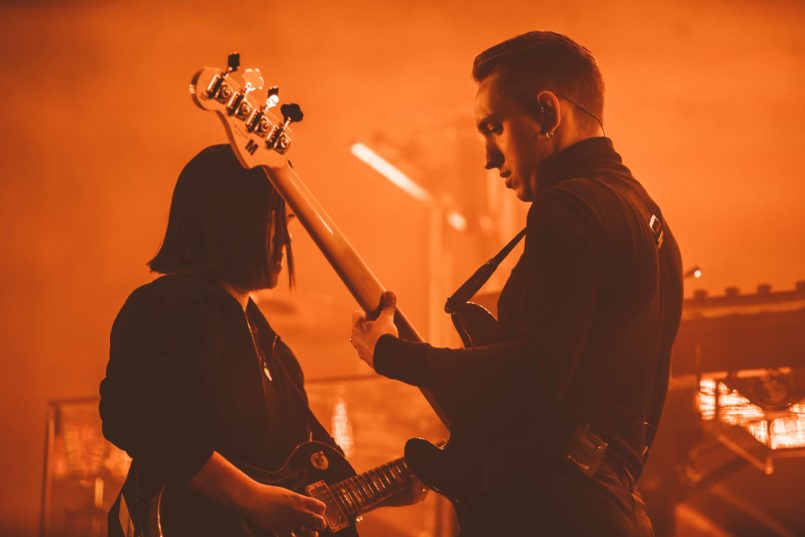 Toronto’s BADBADNOTGOOD closed out the Tito’s Stage with an instrumental jazz-fusion celebration that set the quartet apart from the rest of the bill in a similar way to Solange. Both acts’ music stood in sharp contrast the standard music festival fare. The crowd looked both puzzled and amused.

In the face of what could have been a downer of a year for festival producers, ACL into a mutual love fest where concertgoers went out of their way to help strangers, security staff turned a gentler eye on fans, and festival staff went the extra mile to ensure guests felt appreciated amid an admittedly strange time to attend a festival.

Fans eschewed fear for fun this year. Few people took up the festival’s offer of full refunds after the Vegas shooting. Instead, all involved took upon themselves to make Zilker Park a respite from the madness, a musical sanctuary, where for seventy-two hours we forgot the ugly realities in exchange for participating in an authentic vision. FL