Julien Baker, “Turn Out the Lights”

Across all of “Turn Out the Lights,” Baker doesn’t pull a single punch.
Menu

Across all of “Turn Out the Lights,” Baker doesn’t pull a single punch. 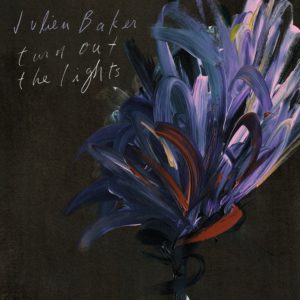 As children, our first introduction to pain is more often than not a physical experience. Typically, it’s a fall that does us in, leaving us with scraped knees—pebbles and dirt crusted into the fresh wound. The moment it occurs, it hurts, and we go looking for someone to tell us it’s going to be OK. That it will heal. It’s only as we get older that we inevitably realize that pain becomes much crueler and harder to recover from when it collides on a mental or emotional level.

Julien Baker understands this feeling, maybe even a little too well. On her 2015 debut, Sprained Ankle, the young, explicitly confessional singer/songwriter from Memphis, Tennessee, managed to turn all of her own internal distress—heartache, depression, the religious doubt that comes with being gay and Christian—into one of the most heart-wrenching albums of that year. Sprained Ankle was deceptively simple, oftentimes relying on nothing more than quietly amped finger-picking, a loop pedal, and Baker’s resolute vocals filling the space of the recordings.

In the wake of her debut, Baker’s profile has risen substantially, carving out a space of wounded intensity not really experienced since the emergence of emo scion Chris Carrabba of Dashboard Confessional. Yet if Sprained Ankle saw Baker capturing catharsis in a quiet corner of an empty room, her sophomore LP, Turn Out the Lights, places that same empty room in a building that’s been evacuated and scheduled for demolition.

Throughout the record’s eleven tracks, Baker solidifies the solitude of her musical aesthetic. Aside from the occasional piano replacing her guitar, and the shading sighs of strings to a few arrangements, it’s still just Baker holding her own alongside a hushing melody.

Of course, what has made, and now continues to make, Baker such a poignant new voice is her songwriting—more specifically, her ability to find beauty in the bleak. It’s difficult to remember an artist capable of externalizing and addressing the subject of depression and the internal conflict that it festers with such plainspoken honesty. Singing on “Appointments,” the album’s lead single and de facto mission statement, Baker mourns the necessity of seeking help with therapy, but that she’ll do her best not to miss any more of her scheduled sessions. Her refrain, “Maybe it’s all gonna turn out alright / I know that it’s not but I have to believe that it is,” is like a mantra. Fake a smile, and just maybe it’ll start to feel real. Baker recognizes that, for those with any kind of debilitating mental health affliction, it can feel like it’s your own fault and that there’s something inherently wrong with you. You’re left wishing, as Baker does on “Happy to Be Here,” that you could “rearrange the wires in my brain—a different me would be inhabiting this body.”

Across all of Turn Out the Lights, Baker doesn’t pull a single punch (“When you watch me throwing punches at the devil, it just looks like I’m fighting with me” she sings on “Shadowboxing”), and things can get remarkably dark. The closing “Claws in Your Back,” for example, follows the thoughts of a suicide victim regretting their decision shortly after “pump[ing] the vitals out of my wrist.” Even more jarring is the track “Hurt Less,” when Baker sings about how she never put much care into wearing a seatbelt. “I didn’t see the point in trying to save myself from an accident,” she sings. “If somebody’s gonna hit me what’s this fabric gonna help.”

What’s important to remember through all of these crushing, painful sentiments is that these aren’t Baker’s direct thoughts anymore. These are the feelings of people she’s met, fans she’s spoken with, people who have identified with the young woman inside Sprained Ankle and had it help them confront their own emotional and mental demons. Baker is reciprocating a strange connection bred through pain, giving the plight of mental health sufferers a much needed sense of reality and urgency. Optimism is a rarity within Turn Out the Lights, but when Baker sings at the end of “Hurt Less,” “This year I’ve started wearing safety belts when I’m driving / Because when I’m with you I don’t have to think about myself and it hurts less,” it feels like an absolute bastion of hope.