“Why are things the way they are?” asks Annie Clark, who, since 2007, has released an unbroken string of beguiling albums as St. Vincent. “And if that reason’s arbitrary, let’s change the way they are. Because you make a couple of tweaks to something and you have, in essence, a new instrument.”

Clark is describing the thought process behind the signature guitar line she designed with Ernie Ball. But she could just as well be talking about her approach to everything she does, from her songwriting and guitar playing to the design of her latest tour, which she conceived in collaboration with the visual artist Philippa Price. By constantly tweaking her sound and aesthetic, Clark has continued to reinvent herself even as she’s built one of the most distinctive bodies of work of any artist of her generation.

Her latest St. Vincent album, last year’s MASSEDUCTION, is yet another metamorphosis. Largely co-produced and partially co-written by pop mastermind Jack Antonoff of Bleachers and fun., it manages to be both her most accessible work to date and the weirdest since her arty debut, Marry Me. During a talk at the ASCAP “I Create Music” EXPO earlier this year, she described the album’s themes as “power, pedal steel, and programmed beats”—a playful turn of phrase, but also an accurate one. Its songs toggle between strength and vulnerability, artifice and frankness, with synth-heavy arrangements splashed with Bowie-like touches of grandeur, often courtesy of guest musicians, including saxophonist Kamasi Washington and pedal-steel guitarist Greg Leisz, or her own beautifully sharp-edged guitar lines.

After premiering the new songs with what she calls a “theater piece show,” which brazenly (and divisively) featured Clark alone onstage with her guitar, playing to a backing track, she returned to a full-band format for her 2018 tour—and turned to Price to create the show’s visual elements. The two first worked together on the video for one of MASSEDUCTION’s wittiest tracks, “Pills,” a delirious mantra for our hyper-medicated times that Price renders as an atomic age phantasmagoria, with wigged dancers moving as jerkily as Barbie dolls across Good Housekeeping lawns and living rooms cast in a sickly color palette she dubs “nuclear bruise.”

As a multi-hyphenate visual artist—director, photographer, fashion and stage designer—Price has built up an impressive list of collaborators, including Alicia Keys, Pharrell, Stella McCartney, Banks, and Rihanna. But she describes St. Vincent and her tour collaborators (a group of “really crazy, creative women,” in Clark’s words) as a dream team. “This was awesome,” Price says. “Everything just worked so perfectly together.”

We asked Clark and Price to describe their collaboration in a conversation that, along the way, also touched on the wild energy of music festivals, the power of choreography, and a praying mantis named Ricardo. FLOOD: Aside from often playing to a much larger crowd, are there other elements of playing a festival that are very different for you as a performer?

Annie Clark: So much is different. You have this kind of raw, lightning-rod, frayed-wire energy from the crowd. Because, you know, they’ve probably walked for miles that day. They might have a little bit of a sunburn. They’re in various stages of intoxication, on various substances. You’ve been outdoors all day. So you’re feral and the audience is feral. It’s chaos, really. Playing festivals is sort of like, “I’m gonna start the biggest bonfire at this place. Look how big this bonfire is. We’ll keep you warm.”

FLOOD: Have festivals played a role in the evolution of your live show?

Annie: Oh, sure. This show is designed specifically for festivals. It’s designed to be big and bizarre. We had this conversation where [I said], “I just want us at every point to be going, ‘Is this OK?’ and not know the answer. If we’re not sure if this is quote-unquote ‘OK’ then we’re not pushing hard enough. Let’s find out what our own limits are.”

FLOOD: Was that “Is this OK?” feeling also part of your process in making the music for MASSEDUCTION? Were you trying to push things just outside your comfort zone?

Annie: Mainly what I wanted to do with MASSEDUCTION was write very honestly about power. And write songs that had the biggest heartbeat, that really just went for the jugular. Not the jugular, actually—just really went for the heart.

FLOOD: How did the two of you first meet?

Philippa Price: Sort of through the “Pills” video. But we didn’t actually meet during that. Annie, you were on tour.

Annie: Yeah, I couldn’t be around for the video. I loved her work and just kind of said, “Go with God.”

Philippa: Which is the dream as a director.

FLOOD: Annie, once you saw the “Pills” video, were you like, “This is amazing, I want you to design my tour”? Or did that conversation start even before the video was done?

Annie: No, I saw the video and I loved it, and then we had a conversation a number of months before the tour about Philippa designing the whole tour. And I think Philippa coined the color palette “nuclear bruise.”

“Playing festivals is sort of like, ‘I’m gonna start the biggest bonfire at this place. Look how big this bonfire is. We’ll keep you warm.’” — Annie Clark

Annie: One of my favorite things about Philippa’s work is just her sense of composition. And there’s a real humor to it without it being silly. I’m trying to think of a couple of moments shooting the video for the tour that were crazy. [At one point] I had a praying mantis on my arm. His name was Ricardo. Philippa, I feel like every day you would come to me and go, “Would you mind if we blew you in the face with a leaf blower?” And I’d be like, “Uh-huh, sure, OK.” Or, “Would you mind if we punched you in the face on slow-motion camera?” “Yes! Punch me harder!”

Philippa: Yeah, Annie, every take you were like, “OK, let’s do it again. We can do it harder.” That first day, I think I came to you and was like, “I’m sorry.” I think we kind of did the worst shots on that first day. She got punched in the face, blasted with a leaf blower, there were bugs. I remember having a moment like, “Oh my god, I hope she doesn’t think all my shoots are, like, torture hell.”

Annie: But I don’t mind. It’s fun. Obviously I trusted you. I was more than happy to do wild shit to get great video. 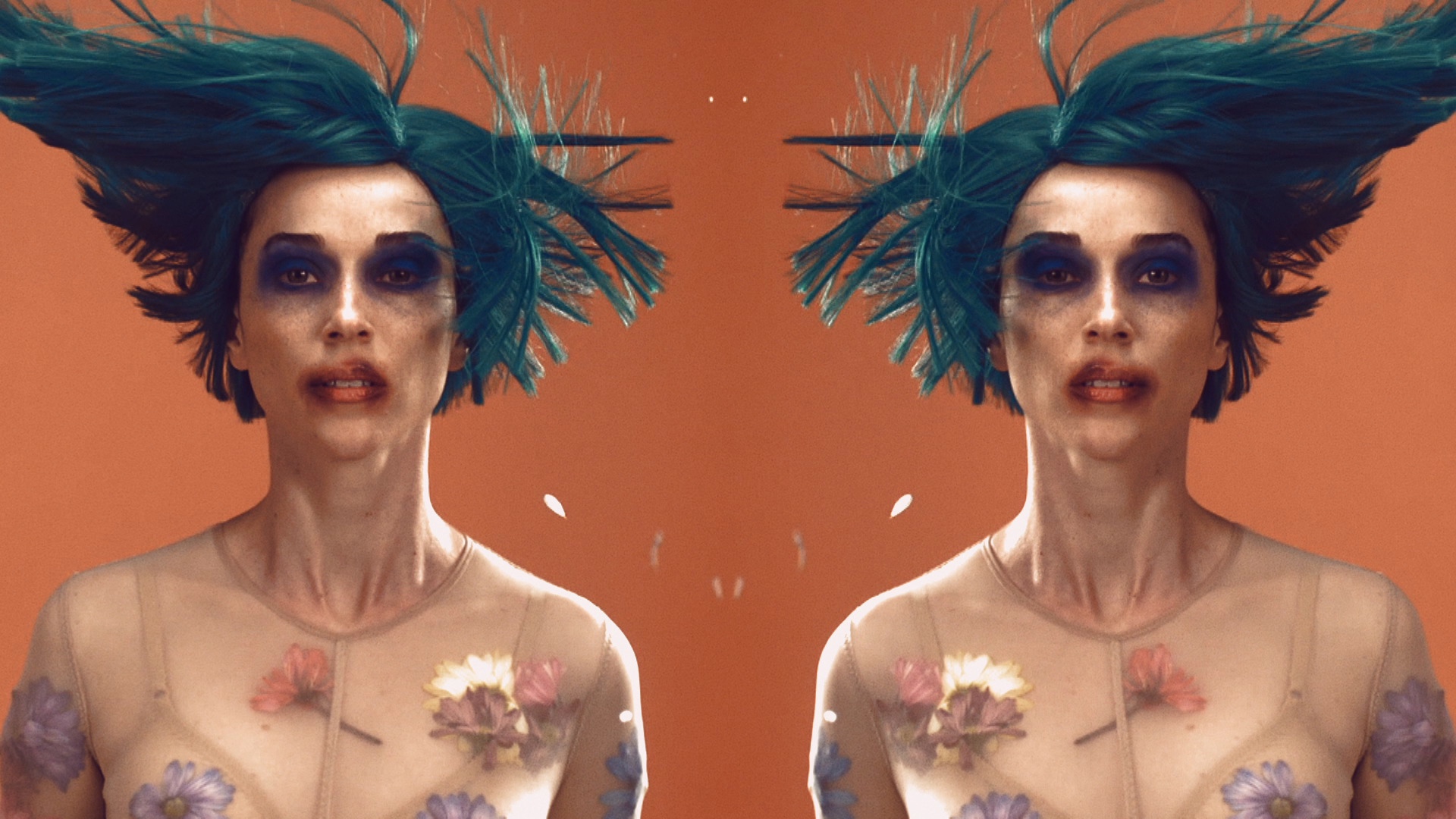 FLOOD: Did any of the visuals for the show wind up influencing how you play the songs live?

Annie: There was a moment where, in rehearsal, Toko [Yasuda], my bass player, and I were just so enthralled by one of the videos that we both turned at the same time and were staring at the video while we were playing—and we ended up choreographing it into the show, because it was just cool.

Philippa: It really naturally evolved as we were shooting and the visuals came together. Anastasia [Magoutas], who was doing the costumes, took the dancer characters and the look that we’d done for the visuals and brought that a bit into the costumes onstage as well. It was an amazing collaboration. I work very intuitively and a lot of times, working with other people, they want to see treatments and shot lists, and everything is mapped out beforehand. And I’ve found when I have to work like that, it actually kind of stifles the results. Whereas this was the dream situation, where Annie trusted me to let things unfold naturally, which I think resulted in this really fucked-up, awesome world that we created together.

FLOOD: Annie, your last few tours have looked highly choreographed. What is it about choreography that appeals to you—having that controlled movement in your shows? I feel like so many rock shows try to do the opposite of that and make everything seem spontaneous, even when it’s not.

“This was the dream situation, where Annie trusted me to let things unfold naturally, which I think resulted in this really fucked-up, awesome world that we created together.” — Philippa Price

Annie: I guess in general I feel like there’s a whole lot of freedom in acknowledging a construct, because you get to remove a layer of artifice. This show is a little bit choreographed but it’s not that choreographed. It’s certainly, you know, a meticulous attention to detail: How do you enter a stage? How do you exit a stage? All these things matter. They set the tone from the very beginning. You have to think that people are getting messages and meaning from everything you’re doing, whether you intend it or not. So why not be thoughtful about at least some, if not all, of that?

But it’s not crazy choreographed, this show. It was more these kind of general edicts from me to the band, like, “OK, my drummer’s an animal. Matt [Johnson], you’re an animal. You’re a beast. That’s your energy.” And Daniel [Mintseris], the keyboard player, is a robot. We even had people at the first show we did not knowing if he was human. Toko, she’s a serpent. And I’m just—I don’t know what the fuck I am. I’m an X, most of the time. Annie: Yeah, you know—wide stance, shoulders back. So they were general choreographic concepts, not really fine-tuned. But we did work with a great choreographer, Jasmine [Albuquerque], who did all the choreography for the dancers for the video stuff and helped us polish the show.

Philippa: I think from observing it, it seems more like you create these choreographed boundaries, but then there is wiggle room. It creates this feeling of a really tightly choreographed performance, but it’s not perfectly the same every time.

FLOOD: Philippa, you’ve worked with a lot of amazing artists like Rihanna and Stella McCartney. In working with St. Vincent, what qualities are unique to this project compared to anything else you’ve done?

Philippa: Annie and Stella and Rihanna have all really trusted me and given me freedom to do my thing and were not overbearing with wanting to see things ahead of time, but I think Annie definitely, out of everyone, super, super trusted me. I put her face on a giant screen behind her getting pretty fucked up. Where she got punched in the face, or the stuff of her jumping up and down where the face goes from really beautiful to pretty ugly—no offense, Annie.

Philippa: Which is really brave, I think, as a female artist. So yeah, the trust was amazing. And also that Annie liked to take it to that “Is this OK?” level, which I really love doing with my work and a lot of people are kind of afraid to do.

This article appears in the 2018 FLOOD Festival Guide, presented by SiriusXM and Toyota. You can check out the rest of the magazine here.