Mitski, “Be the Cowboy”

Mitski is deepening her craft and heightening her emotional availability, but never dulling her edge.
Menu

Reviews
Mitski, “Be the Cowboy”

Mitski is deepening her craft and heightening her emotional availability, but never dulling her edge. 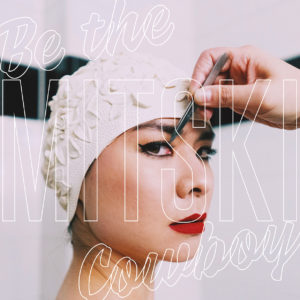 Be the Cowboy
DEAD OCEANS
9/10

Mitski opens her fifth album, Be the Cowboy, with an eruption of pure desire: “Geyser” is a sugar rush of a song, a feverish blast of puppy love befitting of someone who named their last album Puberty 2. But it’s not long before things take a slightly more grown-up turn: There is a song here bearing the happily domestic title “Me and My Husband,” and another that finds her jittery about the effects of global warming. Elsewhere, she declares that nobody pleases her quite like she pleases her. These are all emotional wrinkles that point to a more settled and reflective Mitski album, and that prove accurate, to an extent. Thankfully, though, the twenty-seven-year-old is taking on maturity in all the right ways—deepening her craft and heightening her emotional availability, but never dulling her edge.

It’s true, perhaps, that she’s toned down the guitar pyrotechnics that marked her earlier recordings, though she can still kick up a squall when she wants to. She’s traded those for a song cycle that marries pop hooks with punk economy. The album’s fourteen songs fly by—only two of them exceeding the three-minute mark; “Geyser” makes its point with just a single iteration of its chorus, and even when things slow down, as they do in the back half, Be the Cowboy still has a restless, addictive momentum.

What’s more, by favoring synths as much as she does guitars, Mitski is able to bring a casual, freewheeling virtuosity to her writing. The dulcet pop in “Old Friend” transitions seamlessly into the crunching rock of “A Pearl,” only to be followed by a loping country tune called “Lonesome Love.” The McCartney-esque “Me and My Husband” is unashamedly tuneful and bright. The single “Nobody” builds to a gleeful disco pulse, while “Washing Machine Heat” is appealingly stiff, robotic funk—Devo by way of Dirty Mind.

Mitski’s musical imagination offsets her lyrical plainspeak. Generally, these are songs that say what they mean, articulating emotional complexity without obfuscation. “Why Didn’t You Stop Me” regretfully addresses an ex-lover: “I know that I ended it, but / Why won’t you chase after me?” Elsewhere, she’s casual in how she tosses off self-revelation, as in “Lonesome Love”: “Spend an hour on my makeup / To prove something.” A song called “Remember My Name” has the album’s most aching moment of vulnerability; “I need someone to remember my name,” she sings, a clean line that seems somehow to contain multitudes. These songs, jostling up against one another in the album’s mad dash, add up to a portrait of the artist in transition and at her peak—expanding her vision, refining her sense of self.