Even if it’s pitched as a continuation of earlier works, “Look Now” never feels like a rehash.
Menu

Even if it’s pitched as a continuation of earlier works, “Look Now” never feels like a rehash. 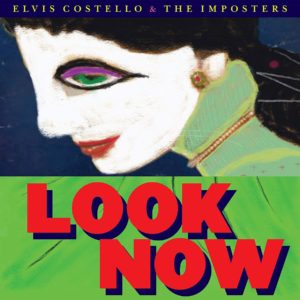 Touring a classic album is almost always an exercise in nostalgia—think of U2’s massive Joshua Tree tour, or The Rolling Stones’ Sticky Fingers revue—but when Elvis Costello revived Imperial Bedroom last year, it was with the express intention of unearthing new creative avenues. Evidently it worked: For Look Now, Costello has reconvened his Imposters for the first time in a decade, and written a set of dense and majestic songs that are consciously pitched as Imperial Bedroom by way of Painted from Memory, his 1998 team-up with Burt Bacharach.

That translates into something of a masterwork for Costello, though maybe not in the way you expect. Whatever guitars are present here are buried in the mix, and there’s nary a moment that qualifies as rock and roll. Instead, Look Now celebrates the Elvis Costello who writes operas, sings torch songs, and speaks lovingly of Tin Pan Alley. It’s an ornate album that features some of the lushest orchestrations and most complex vocal arrangements of any Costello effort thus far, and its dominant mode is a kind of elegant, lavish introspection.

Yet it’s very much a pop album, too, bursting with hooks and delirious with color. “Under Lime,” which continues the story of National Ransom’s “Jimmie Standing in the Rain,” wrestles seven (!!) verses into a punchy five-and-a-half-minute blast of melody and rhythm, while “Mr. and Mrs. Hush” adorns tight grooves with the splash of cymbals and the thunder of a full horn section. At the other end of the spectrum there’s the mannered and melodramatic “Stripping Paper,” which uses wallpaper removal as a metaphor for romantic dissolution; “He’s Given Me Things” begins as a haunted saloon song but builds into a mighty orchestral swirl.

Even if it’s pitched as a continuation of earlier works, Look Now never feels like a rehash; it’s too carefully considered to be a throwback, and it synthesizes those earlier records into something distinctive. “Don’t Look Now,” a burnished piano ballad, is an explicit return to Painted from Memory’s pop classicism, while the airtight rhythms of “Burnt Sugar Is So Bitter”—a cowrite with Carole King—faintly suggests the immaculate grooves of Steely Dan, sans irony. Put all of this together and you have a record that captures so many of the things Elvis Costello does well, combined in a way that feels fresh: tuneful enough to offer an immediate visceral impact, sophisticated enough to reward whatever level of attention you care to give it.