This new head honcho of humor is diversifying the formats and faces featured in the revered magazine.
Menu

This new head honcho of humor is diversifying the formats and faces featured in the revered magazine.

BACKSTORY: An ambitious humorist whose wit and grit allowed her to climb the ranks of The New Yorker from assistant editor to department head in just five years
FROM: New York, New York
YOU MIGHT KNOW HER FROM: Her wryly humorous essays for The New Yorker’s Talk of the Town section on everything from cult filmmaker Jack Smith to 3D-printed cookie cutters
NOW: At thirty—twenty-nine when she was promoted—she is the mag’s youngest and first-ever female cartoon editor, taking the mantel from longtime editor Bob Mankoff 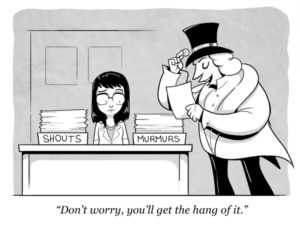 If ever there was a time for The New Yorker’s well-known blend of serious journalism and absurdist humor, this peculiar historical moment—characterized by a simultaneous hunger for objective facts and an overwhelming desire to escape them—would surely be it. “I think a lot of people enjoy the fact that New Yorker cartoons are embedded within articles that are so bleak and grim,” Emma Allen, the magazine’s new cartoon and humor editor, suggests during our conversation. “They’re moments of levity that can be silly and lighthearted and stupid. ‘Stupid’ sometimes is not an insult.”

In her unprecedented role overseeing much of the publication’s humor content, Allen has already expanded its breadth and potential to accommodate new voices, building up Daily Shouts, Daily Cartoon online, video series, and podcasts, alongside her standard-form duties as cartoon editor. “The New Yorker was founded as a comic magazine,” she reminds me, and indeed, her appointment feels like a timely renewal of founding editor Harold Ross’s serious commitment to “gaiety, wit, and satire.”

When I call Allen, she’s surrounded by “towering stacks of printed out gags,” trying to decide which ones to bring to her weekly meeting with editor-in-chief David Remnick, and in what order for maximal impact. Also of concern is how effectively her black velvet onesie is operating as a magnet for all the lint in her office, and not if, but how much, Remnick will mock her for it.

Every Tuesday, Allen assesses the latest cartoon “batches,” submitted digitally or in person, and numbering around a thousand, before culling her way to an edit by Wednesday. There is no secret formula for making the cut, but as she sees it, the essential categories for the classic gags are “gimlet-eyed observational things” and “things that are just totally dada and surreal and come from the minds of madmen.”

“I think a lot of people enjoy the fact that New Yorker cartoons are embedded within articles that are so bleak and grim.”

As a relative newcomer keen to minimize the well-known pain of being edited, her modus operandi has been to approach the process with humility and “crippling empathy.” But paired with an ambitious creative vision, that empathy has proven far from crippling; instead, contributors are thriving on constructive feedback and alternate opportunities for exposure, as Allen has worked tirelessly to carve out an ever-larger place between publication (in the traditional sense) and rejection.

Allen’s interest in experimenting with new formats online, from longer-form cartoons to moving image and even augmented reality, plays into the rise of a new generation of comic jacks-of-all-trades. “I think the boundaries between specific types of comedy and specific types of comics are breaking down,” she says, which has meant that the submission process is no longer “just this endless game of presenting work and then hearing ‘yes’ or ‘no’—and instead it’s been, ‘How can we adapt this into something else we can use?’”

New regular features online have also allowed the magazine to be “hyper-responsive” to current events, particularly important when “there’s just so much to respond to and satirize in the world of politics.” Still, it has been a balancing act mediating the imperative to “lampoon people in power” and simply offer readers a reprieve from it all.

Allen herself is the only one who doesn’t get a break, living and breathing a daily comedy variety show, from the podcasts she listens to on her morning commute to the stand-up specials she watches before bed. “You do get to the point where you’re saying ‘laugh out loud’ instead of laughing,” she admits, “but for the most part I think one of my qualifications for this job is that I have a pretty infinite appetite.” FL