The songwriter opens up about the role fate played in his band’s new record (just don’t ask him its release date).
Menu

The songwriter opens up about the role fate played in his band’s new record (just don’t ask him its release date).

Bradford Cox isn’t bothered by mystic matters. Although the Deerhunter frontman spent time in Marfa, Texas during the recording of the band’s eighth album, Why Hasn’t Everything Already Disappeared?, he didn’t go for the infamous Marfa lights, instead finding himself transfixed by the shining eyes of hundreds of rabbits on the roads, an occurrence he calls “haunting.” As for musicians comparing their synesthesia to some kind of cosmic awareness? Not a connection Cox fully buys into, a fact he offers in tandem with his opinion on the color of Stravinsky’s “Rite of Spring”—“a very synthetic fuchsia.” (Meanwhile, the color of Deerhunter albums are represented by their artwork, which Cox creates himself.)

Cox describes his concept of heaven as Goodwill (the store) and his dog Faulkner. It’s a belief backed by his day’s two big purchases: a geometric 1940s Art Deco vase and dog treats, the latter of which briefly pauses our phone call, as he reads ingredients at the grocery store. Though Cox is slow to embrace the idea of extraterrestrials or extra senses, there is one hard-to-define term that he does credit his career to: fate.

“Nothing is ever planned,” he says, admitting it’s a band-wide problem. “If we were better planners [the album] would have been out on time and under budget. It’s not just me. We’re just not good at planning…I think fate is essential. If it’s not fated, it’s not going to happen.”

The Atlanta-based band, who prefer to work in their own city, ended up in Texas after being invited by Cate Le Bon to the 2018 Marfa Myths festival, where the two recorded an EP together as artists in residence. Cox opted to bring his band out a week later, thus fulfilling a long-time goal of allowing Le Bon to produce on his project. (When I point out that this might count as planning, Cox disagrees, comparing it more to the “if I’m going to grocery store I might as well stop and get gas” line of reasoning.)

Why Hasn’t Everything Already Disappeared? is a sonic expansion of the warm tones found in Deerhunter’s 2015 Fading Frontier. Using the studio as an instrument in what Cox describes as “the art rock tradition,” the band’s melodic rock was embellished by tracking each musician separately, allowing for results such as “Détournement,” which starts with a disembodied, highly-filtered voice announcing “Hello to Japan;” the haunting xylophone and barely-played saxophone of “Tarnung;” and generous layers of reverb throughout. Pesky fate may have intervened when it came to microphone choices, or accidentally compressing a signal before printing—all technical issues Cox prefers not to bore people with—but for someone who doesn’t plan, he sure knows how to embrace a challenge.

“Some people get lost in it and get very obsessive, and they never finish anything,” he says. “I make a radical decision, hear how it sounds, and then commit to it.”

“I think nostalgia is never honest. It’s kind of delusional, in a cultural context.”

Although most of the album was written before they decamped, Cox reveals that a bit of the hot, dusty Texas town’s influence seeped into the final process. There were the bandanas and cowboy hats his band wore in press shots—more function than fashion. (“I’m not going to pretend I would allow someone to wear an ugly cowboy hat!” he adds.) But there was also a song from his archives that made an unexpected reappearance.

“I did write a song about Marfa called ‘Plains,’” he says. “I wrote the initial song many, many years ago. Before Cryptograms, probably. But then when we went to Marfa we finally used it. I did write a mystical short story about a missing friend [in connection to the song]. It’s all very unknown to me. Sort of like a séance.” 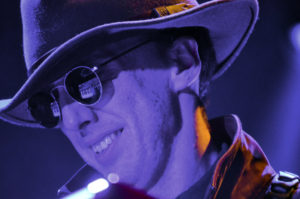 While Cox hopes fans enjoy the album (although, in line with his aversion to planning, he doesn’t really know, or care, to learn its release date), there is the hope that Deerhunter won’t get painted with the nostalgia brush. Comments in previous interviews have made him sound adverse to the idea, but Cox wants to make it clear he’s not a wholesale nostalgia hater—just a believer that everything in life, including music, should be judged on its own merits.

“What I’m really discussing is a sociological nostalgia,” he explains patiently. “For example, people think the ’80s are so cute. They don’t realize the music was really good, but there was Reagan and Thatcher. It was a very difficult time. A lot of people lost their lives to terrible wars, AIDs. I think nostalgia is never honest. It’s kind of delusional, in a cultural context. All we have in life is nostalgia. We’re making it all the time. We’re building a nest of memories. I’m not telling people their memories are toxic. I’m telling people, don’t forget to live in the present. What happens is when your entire life is built around nostalgia and the past, and then it’s ten years from now, your mirror on the past, it’s a copy of a copy.”

And who could argue? With both dogs and Goodwill at the ready, it’s better to live in the present tense anyway. FL