The forces that kept Estonia enclosed on the wrong side of the Iron Curtain are laid out in startling detail.
Menu

The forces that kept Estonia enclosed on the wrong side of the Iron Curtain are laid out in startling detail.

Even amidst American concerns with our current administration’s ties to Russia (oh sorry—alleged ties), I didn’t expect its neighboring Baltics’ dark history to resonate on a personal level. My own admittedly selfish goals for visiting Tallinn, Estonia’s capital, involved having a drink at the ultra-kitschy Depeche Mode Baar and a walk through the fairy-evoking old town. It’s an ideal place for travel escapists: From its quaint, pastel-washed buildings, to the sweep of its majestic Baltic Sea views, the city is full of Instagram-worthy vistas. But for fifty-one years of the country’s history, positive adjectives were harder to come by.

The forces that kept Estonia enclosed on the wrong side of the Iron Curtain are laid out in startling detail at Tallinn’s KGB Museum. Located on the “secret” twenty-third floor of Hotel Viru, the location of this unexpected shrine to the Russian police force isn’t a clever way to save space, but rather an important part of the museum’s complex narrative. Strapped for cash, the communist regime built the hotel in 1972 as the only approved lodging for non-citizens—consolidating the task of spying on non-nationals and taking their money into one convenient bed-and-breakfast package. Naturally, KGB made its headquarters on the top floor, which we explored during a one-hour tour. 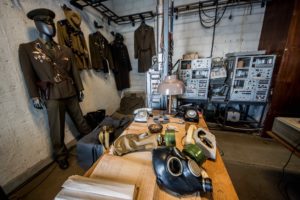 Given its origins, even today Viru remains an impressive mini-city. Sure, we’re reminded—as we shiver on the large balcony overlooking the old town’s postcard skyline—that views were blocked because actual information about the country was forbidden. (Several of the doors were branded with the ominous label “There’s nothing here.”) But the photos lining the hall show places to eat, drink, have one’s hair done, and even visit the dentist within the hotel walls…provided you didn’t mind your every move recorded and documented. Of course, visitors weren’t prisoners. You could even hire a driver and leave the city if you didn’t mind having an inquisitive KGB agent at the wheel.

Due to modernization, museum attendees are forced to imagine the babushkas hired to sit in each hall and record the movements of hotel guests—and the “gifts” savvy guests would leave for them as a way to bribe themselves out of being tracked. But the items on display in the museum’s narrow rooms paint a more vivid picture: listening devices, designed to be crammed in bread plates, lamps, or holes in the wall (when it was built, the joke was that Viru was made of a new material—50 percent concrete, 50 percent microphones); coin purses, rigged with ink packs that detonate on opening (what better way to mark untrustworthy employees in a regime that hinges on total devotion?); a red phone with an open line to superior officers; a “complaint book,” which benevolent citizens were allowed to fill with compliments (our guide brazenly flips through this to show us different entries…all positive, of course).

The items on display in the museum’s narrow rooms paint a vivid picture: listening devices, designed to be crammed in bread plates, lamps, or holes in the wall; coin purses, rigged with ink packs that detonate on opening; a red phone with an open line to superior officers.

As the final room of the offices indicates, the agents made little effort to cover their tracks when leaving Estonia after the Soviets retreated in 1991. Therein lies the strength of the museum: Although small, it tells a grand scale story with only a few objects. A half-smashed telephone-turned-microphone sits on one desk, an ashtray filled with cigarette butts on another—it’s almost easy to believe that the KGB agents, like so many James Bond villains, wanted their dastardly plan to be revealed and revered. An idea that seems outlandish…until, again, you start considering our current news cycle.

In some ways, the museum’s poignant storytelling might feel undercut by the cardboard cutouts of KGB agents that tourists are encouraged to pose with in the lobby. But that, too, is part of a larger narrative. Since the Soviet era, Estonia has made monumental advancements, both in technology (they invented Skype, and became the first nation to offer e-residencies) and human rights. They have earned their freedom, reduced their oppressors to a punchline, and along the way, reminded us that if we’re not careful, this could all happen again. Until we’re certain, maybe Instagram vacations can wait. FL