Even though her band’s music presents immense insight into society’s ills, Clementine is still getting to know herself. And that’s OK.
Menu

Even though her band’s music presents immense insight into society’s ills, Clementine is still getting to know herself. And that’s OK.

To her surprise, Clementine Creevy has made it through about three-fourths of The Handmaid’s Tale. “I had some friends who were like, ‘I can’t watch it,’” says Creevy of Hulu’s eerily relevant, often violent show in which a theonomic dictatorship rules America. Although Creevy—the frontperson of outspokenly progressive LA-based rock band Cherry Glazerr—at first agreed with her friends, her mindset later changed. “You have to watch it,” she says. “It’s necessary.”

This sentiment makes perfect sense coming from someone known to be an unflappable, open-book feminist. On a cold, foggy Tuesday afternoon in Manhattan, conversation with Creevy—whose striking blue eyes and dyed-blond hair contrast her clear-framed, semi-circular glasses—frequently returns to whether Handmaid’s-style explicit social commentary has more merit than the art through which its creator explores her internal struggles.

Stuffed & Ready, Cherry Glazerr’s fourth album, falls more strongly in the latter, internal struggles camp than any of the band’s previous releases. Across the album, on which the band mines its rambunctious, guitar-and-synth-driven melodic palette for their most muscular, grunge-infused sludge pop to date, Creevy uses her lyrics to explore isolation, anger, and self-identified flaws instead of remarking directly upon capitalism and the patriarchy. Where Stuffed & Ready’s predecessor, Apocalipstick, offered grand statements on what the world is and how we can change it, Creevy presents herself here humbly, as a person who doesn’t have all the answers—and doesn’t need to.

“I think it’s easier for someone to say, ‘This is how the world is,’ than, ‘This is how I’m feeling,’” she says. On Stuffed & Ready, her vulnerability is cordial and inviting, just as she is in conversation. 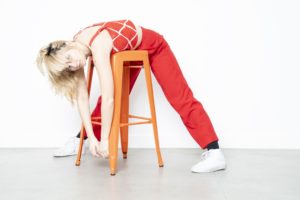 You wrote Stuffed & Ready by looking inward. How do you feel about the notion that the personal is political?

I think it’s the truest thing ever. You don’t get political without the personal. Without oppressed people talking about their experiences, you have no frame of reference for how to change things. Everything I do is political because I’m a product of a society; therefore, my actions are informed by my surroundings, my culture, and the ingrained systems within me.

A song like “Daddi” takes on the whole concept of men patrolling women’s bodies. How much of that is personal, versus social commentary, for you?

Although I do have a feminist education—I’ve been a feminist since I was seventeen, when I was taught about it—it’s easier said than done when life gets in the way. I find myself slipping into subservient traditional roles, and I’m really upset with myself that I can’t walk the walk as well as I talk the talk. “Daddi” is about that frustration.

On “Stupid Fish,” when you say, “I see myself in you, and that’s why I fuckin’ hate you,” that hit me hard. I relate to that sentiment so much, and that was the first time I heard somebody else express it, which was really powerful for me.

“I’ve been a feminist since I was seventeen, when I was taught about it—it’s easier said than done when life gets in the way. I find myself slipping into subservient traditional roles.”

I feel like sometimes we’re attracted to people that are really different from us. There’s something so jarring about seeing your own qualities in another person. If you’re a slightly self-loathing person, it might result in anger.

You’ve said that you want people to hear these songs and feel liberated and seen, and that’s such a good example of it. At the same time, the whole premise of this album seems to be not having all the answers.

I’m teetering on this line between being the most confident musician I’ve ever been while being emotionally confused about who I am. In this sort of aesthetic, globalized world we live in, I think people want to be able to define themselves, like, “What kind of a person are you?” It’s something I struggle with: wanting to define myself, but not really being able to. 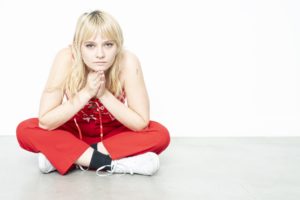 You’ve acted too. How did you get into acting?

I started acting and got asked by Jill Soloway, [Creevy’s friend’s parent], to be in Transparent. Jill wanted a band in the show, and I had started Cherry Glazerr already. I had a really fun time acting. I appreciate it as an art form.

How did you feel when you learned about the on-set allegations against Jeffrey Tambor?

CREEVY: [long pause] I don’t know how it made me feel. Confused. Shocked. I love Jill, and that’s the reason why I was a part of the show. 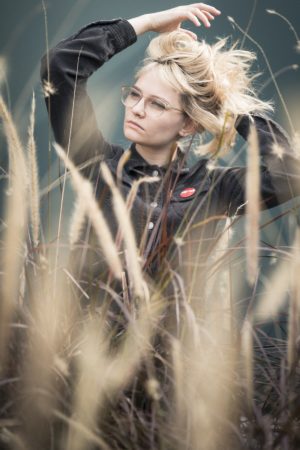 In “Ohio,” you use the image of being broken and dead, which is somewhat more abstract than other lyrics on the album. How often did you look at the lyrics and think about whether to make them more clear, or to leave some mystery in?

I like some of my songs being mysterious. I write lyrics based on what words sound great in the guitar lines, because I write guitar first, always. A lot of my songs put feeling first more than anything. “Ohio” is all about feeling really cold on tour [laughs]. That bone-chilling, stinky van combination. I wrote that riff in Ohio, so I felt it was an appropriate name for the song.

It sounds like you don’t have heat in that van. I hope that’s not the same van you’re touring in this go-round.

It’s the same van! We ain’t at the point where we’re in a bus yet, but we do have a trailer, so we’re moving on up in the world. FL

For more pix of Clementine in all her glory, check out the gallery below.