Asperger’s Are Us Accidentally Combine Comedy and Heart

With an HBO mini-series and a second retirement in their imminent future, the comedy troupe take us behind the scenes of their beloved act.
Menu

Film + TV
Asperger’s Are Us Accidentally Combine Comedy and Heart

With an HBO mini-series and a second retirement in their imminent future, the comedy troupe take us behind the scenes of their beloved act.

After a career that yielded a Netflix documentary, a subsequent HBO mini-series, and a handful of international tours, it’s telling that one of the fondest memories of the four comedians that make up Asperger’s Are Us is the night they hired a CPR instructor as their opener.

“It was a totally real CPR demonstration for the audience of the Kennedy Center, and it did not go over well,” member Noah Britton gleefully recounts with the occasional aside from fellow groupmate Jack Hanke. “Conceptually, that was one of my favorite things we ever did.”

Having a medical professional open their show is the exact brand of bone-dry satire Asperger’s Are Us are happy to serve up amidst a nightly barrage of questions about their diagnoses or worse, pitying praise from showgoers simply showing up to cheer on the first troupe of comedians on the Autism spectrum.

“Like a portion of the audiences we’ve had over the years, they came for the wrong reasons,”  Britton continues. “They want some kind of educational thing on Autism and they weren’t prepared to laugh at an absurd troupe. Those are the shows that go badly.”

If their ever-growing spotlight has anything to say about it though, AAU will soon have to spend less time explaining their comedy and more time performing it for the people who understand the brand of pun-heavy, absurdist humor they’ve been cultivating for the last decade.

Rounded out by Ethan Finlan and New Michael Ingemi, the troupe met in the summer of 2010 at a summer camp outside of Boston for individuals on the spectrum. Britton, then a counselor, built such an age-transcending comedic rapport with three of his campers, he reached out as soon as they graduated from camp with an offer to continue writing sketches as a legitimate troupe.

“We don’t feel close to the community of comedy because most of it sucks. So much of it relies on tropes… We love good comedy, but we hate bad comedy,” Britton says. “These guys make me laugh more than anything. We’ve got no other good traits, but we are pretty funny.”

By the time director Alex Lehmann stumbled upon Asperger’s Are Us, local publications had just begun picking up on the troupe’s brand of Kids in The Hall–inspired sketches in a post–Nathan For You world of cerebral absurdism.

“I would not have made the original doc if I didn’t think they were funny,” Lehmann attests. “I’m their biggest fan and I want to see them succeed. They deserve to succeed.”

Lehmann’s interest could not have been piqued at a worse time. Asperger’s Are Us had quietly decided to disband, as Hanke accepted a year-long scholarship at Oxford University—but the director convinced the troupe to let him document the weeks leading up to their final show.

“We don’t feel close to the community of comedy because most of it sucks. So much of it relies on tropes… We love good comedy, but we hate bad comedy. These guys make me laugh more than anything. We’ve got no other good traits, but we are pretty funny.” — Noah Britton

Released in 2016, the eponymously titled Netflix documentary finds an earnest coming-of-age story amidst Asperger’s Are Us’s rapid-fire banter, navigating friendships, family dynamics, and interpersonal struggles as the four’s perceived last days together tick away. The troupe initially bristled at the film’s sentimentality and lack of focus on their sketches, making their criticisms readily apparent by mentioning them in almost every interview during the press cycle. Their disagreements peaked with all four members starting a mock protest of the film at SXSW.

“Yeah, they had some stuff to say about the original doc,” Lehmann acknowledges. “They’ve told me since then that they like it a lot more than they first thought they did.”

“Alex is under the misunderstanding that comedy and heart go together, but I’ve always been a big proponent of separation in these two areas,” Britton says. “Any movie that isn’t funny better be really, really thought-provoking or I’m not going to care.”

“The things I don’t like about it have nothing to do with any valid criticism of it,” Hanke chimes in. “I just really hate watching and listening to myself.”

The troupe inevitably showed up to their SXSW premiere, and ahead of the film’s wider debut, Lehmann floated the idea of a follow-up series as they considered a reunion tour upon Hanke’s return. “We had a whole lot of people that misunderstood what we were about due to the movie they watched—which again, hadn’t been released publicly when we did the tour,” Britton says. “Things were different then, but I’m glad we did it.”

“I think they were more prepared for a tour like this after the doc was made,” Lehmann adds. “The doc was an origin story and the series is a road trip… Now that we know who these guys are and they’ve kind of grown up a little bit, we want to see them conquer the world.”

With funding from the Duplass Brothers (the producers) to purchase an RV, HBO’s On Tour With Asperger’s Are Us ambitiously tests Lehmann’s world-conquering belief with an ambitious six-week tour across America’s most respected comedy clubs. Opening on the troupe getting legally joined under a shared business license solely because, in Ingemi’s words, “Massachusetts doesn’t recognize polyamorous marriages yet,” On Tour more readily showcases the group’s effortless humor both on and off-stage, but also doesn’t shy from the darker moments of the comedy world with a camera crew in tow.

“It was a trial by fire. It was the longest tour any of us had ever been on,” Britton says. “It was very touch-and-go. [Lehmann] almost walked at one point.”

“That would’ve been a terrible decision, because the RV is much faster,” Hanke quips. “We would’ve had to take the rest of the tour extremely slowly.”

The emotional whiplash is palpable as the troupe bounds from a triumphant tour opening show in Boston to bombing alongside comedian opener Joe Pera at Carolines in New York the following night. “You want to go up and save your friends, but there’s nothing you can do about it,” Lehmann says. “You want to tell an honest story, so you have to show the highs and the lows.”

Adding insult to injury, the Carolines set was bookended by having to jump their RV and a particularly cringeworthy scene involving Hanke emptying the van’s septic tank with a faulty tube. Fixing the RV ultimately became such a frequent chore, Britton became concerned that the breakdowns were “reality show B.S.” cooked up to make the show a comedy of errors at the troupe’s expense.

“We got a little paranoid that they were doing it on purpose because this was so stunningly, obviously the wrong thing to do,” he continues. “The reason it kept breaking down, which is a repeated trope in the series, is that they didn’t do their due diligence as owners to figure out how to run it and maintain it.”

“Their name is Asperger’s Are Us, so, for god’s sake, you have to expect people sometimes expect some advocacy.” — Alex Lehmann

Even while the trust between the troupe and film crew was at its most fraught, the cameras caught a seemingly impossible occurrence after a show: a successful merger of comedy and heart. Some credit goes to two parents at the troupe’s Baltimore show, who asked during the group’s Q&A how to support the dreams and ambitions of their children on the spectrum.

“Congratulations!” Ingemi exclaims as one parent mentions their daughter’s recent diagnosis. The crowd laughs, but Ingemi emphasizes that it wasn’t a punchline.

“Try not to take anything personally,” Britton suggests as the mother wipes away tears. “They’re working really hard to satisfy you and your needs while also making sure their lives are okay… We’ve been on tour for a week and, of course, we want to kill each other everyday—but, of course, we love each other similar to you and your children.”

The troupe started doing Q&As as an opportunity to flex their improvised humor, but as their profile rose and more people came with sincere questions about Asperger’s, Britton and the group began making some concessions. “I can’t give you a guarantee that we will give them a non-joke answer, but if they have a really sincere question that we haven’t answered already, I’ll take the time to answer it,” Britton says.

“Their name is Asperger’s Are Us, so, for god’s sake, you have to expect people sometimes expect some advocacy,” Lehmann adds succinctly. 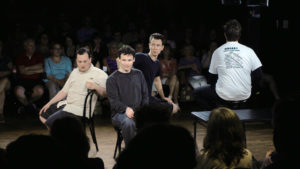 Considering their sparse plans for the rest of 2019, you wouldn’t think Asperger’s Are Us are prepared to be stars of an HBO mini-series. After a handful of dates across the US and Europe the next two months, and a vinyl release later this year of songs featured in the series by Britton’s band, Request Freebird, the troupe is back to semi-retirement.

“[Alex] is always like, ‘you’re gonna be rockstars, you’re gonna make a lot of money,’ but three of us live with our parents because we didn’t make that much money and I teach six classes a year,” Britton says bluntly.

“I can only do one thing well at a time, and I’d rather do other things with my life, which makes the idea of doing comedy pretty difficult,” Hanke adds.

“And when he says he can do one thing well, he’s being very generous,” Britton jokes.

Of course, both are open to discussing another reunion if a lucrative enough opportunity arose—but for now, Asperger’s Are Us seem content in going back to where they started: riffing on each other, no reality show B.S. in sight.

“I think we’ll go our separate ways and hang out at funerals,” Britton concludes about their future. “Funeral crashing…that’s how we’ll do most of our socializing.”

“I already do it that way,” Hanke interrupts. Before I think to get another word in, the two are already several non-sequitur-laden jokes ahead of me. FL