Checking in on the annual pilgrimage to the electronic music mecca with festival producer Jason Huvaere and DJ Claude VonStroke.
Menu

Checking in on the annual pilgrimage to the electronic music mecca with festival producer Jason Huvaere and DJ Claude VonStroke.

Among the global techno, house, and electronic music underground, the annual Movement Festival, which always falls on Memorial Day weekend, has come to be known by its faithful devotees simply by the hallowed Detroit location.

Movement, in its own inimitable way, is not just a music festival. It’s a responsibility. It’s become an annual pilgrimage for fans, artists, and industry types alike, converging on Detroit to celebrate all things techno, house, and beyond.

At the eye of the storm is Jason Huvaere, the founder and president of Paxahau Productions, the company that sets up Movement every year. A genuine product of Detroit’s fertile ’90s rave scene, Huvaere and his team have helped settle the once-tumultuous event into a dependable tradition.

When I catch up with him by phone to talk about this year’s model, the discussion quickly turns to the ebb and flow of festival culture in America, and Movement’s place in that landscape. He’s diplomatic, but honest. 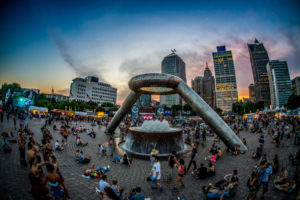 “There’s the underground electronic music culture where we came from, and then there’s the straight-up, tourism, popular event,” he explains. “From an electronic music perspective, we’ve been promoting in Detroit for a very long time, back when the parties were very small. Now to see it up to fifty dance parties a year plus the festival, that growth and popularity has been a great adventure, a lot of fun, and a lot of work.

“From a tourism element, Detroit has a number of festivals, but not so many that draw this many people from outside the area—that’s what makes Movement so unique,” he continues. “Aside from being what some would say is the most culturally relevant event of the year, it’s also without question the biggest tourist attraction the city has to offer.”

As for the hordes of young fans who take over downtown Detroit’s Hart Plaza for Movement, it’s likely that they’re blissfully unaware of the fest’s long and complicated history, one that’s found the event change names and producers multiple times since launching back in 2000.

Today, the three-day event continues without much controversy, with countless after-parties taking over through Tuesday morning, turning the city and surrounding areas (including Windsor, Canada) into a twenty-four-hour techno fantasyland for nearly a full week. 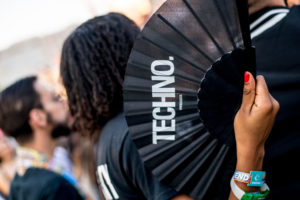 DJ, producer, and Dirtybird label head Claude VonStroke has watched Movement’s growth from the very beginning—even if he did miss that vaunted first year.

“I really wanted to go. I’d just moved out to San Francisco and I was broke,” VonStroke laughs, remembering Movement’s inaugural year, when it was still known as the Detroit Electronic Music Festival (DEMF). “I was at the second one as a fan. It was cool, and I loved it. The festival went through so much drama—it’s funny how you only remember the bad things. My strongest recollection of the festival is the year they were going around with hats collecting donations from the crowd, because they were trying to run it for free and were broke. Then they realized that’s just like, really hard. It would go from feast to famine. One year, it was sponsored by Ford. The next year, they were passing the hats.”

Movement has smoothed out most of those rough edges, and continues to refine and update the event every year. For 2019, new wrinkles include pushing the time the doors open every day to two p.m., instead of the previous noon start.

Movement’s tightly curated lineups have long set it apart from the more traditional EDM–powered mega-raves. It’s a distinction that’s become easier for Huvaere to explain to the uninitiated, as techno and more underground sounds continue to make inroads into that world.

“We experience change a lot differently than EDM. People who are really dialed into electronic music can tell the difference,” Huvaere says. “Sometimes it’s hard to articulate what some of those differences are without using really cliché words. EDM was never really big here. Detroit was so proud of its musical heritage, and we have so many music snobs in the scene. Techno itself is evolving, so it’s not just super-mechanical and dingy anymore. It’s become more accessible not just to the ear, but culturally, people are starting to refer to it and spread it to their friends. They respond to the authenticity. There are a lot more new people than there are vintage people, and it’s a good thing.” 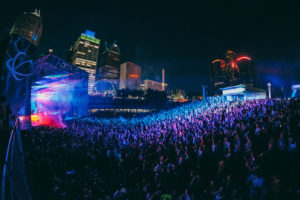 When pressed on developing trends he’s seen in techno culture given his frontline perspective, Huvaere cites across-the-board integration, from electronic acts incorporating live elements, to the scene being more open to a wider variety of sounds and styles. He also says there’s even a bit of Coachella effect, with fashion and trendy brands wanting to be part of the proceedings.

“The EDM bubble was kind of designed to burst,” he explains. “Techno’s really never gotten that far, and I hope it really doesn’t, for a couple of great reasons: one, the musical integrity is something that a lot of people have devoted their lives to. And two, we’re pretty fixed in this direction. Having a 4X4 dance room with good, innovative electronic sounds is something that we’ve devoted our time to as professionals. I hope that it stays true to its course, and that it never gets to the point where it has the ability to burst. I’m not sure that it will.” FL