Since the 1950s, surf films have followed a simple formula: collaging crashing waves and dexterous bodies under a soundtrack of peppy rock ‘n’ roll. It’s become a reliable trope that desperately needed updating.

That’s why indie record label Mexican Summer and New York brand Pilgrim Surf + Supply teamed up to flip this tradition on its head with the release of Self Discovery for Social Survival, a subversive surf film that’s inherently collaborative. It’s out digitally on June 18.

“The idea was to send surfers and musicians off on these trips together,” director Chris Gentile explains in the description for the official soundtrack. “Get them out there amongst it—in the surf, in the afterglow of the surf, talking story at dinner, just all the great stuff that happens on a surf trip.” Next, the musicians would jump into the studio to compose based on their experiences. “With their hair still wet, so to speak.”

The resulting film is comprised of three vignettes, narrated by the magical, frail voice of legendary director and poet Jonas Mekas, who passed away at the start of this year. Each vignette follows a team of surfers and musicians as they embark on adventures around the world. Los Angeles garage rockers Allah-Las and a team of pro surfers including Ryan Burch, CJ Nelson, and Karina Rozunko ride wild waves and encounter locals with “leathery faces and breath that smells like carne asada” in Mexico. Psychedelic dub duo Peaking Lights serenade the pristine waters of the Maldives, where Ellis Ericson, Beau Foster, and Creed McTaggart hit the waves. And two of alternative pop’s biggest oddballs, Connan Mockasin and Andrew VanWyngarden from MGMT, make spooky sounds to match Iceland’s otherworldly landscapes, joined by champion surfers Stephanie Gilmore, Beau Foster again, and Andrew Kidman.

“It was a real bonding trip for me and Connan. We probably annoyed people with our never-ending Björk impressions.”
—Andrew VanWyngarden

Mockasin and VanWyngarden created the film’s standout song “Bad Boys,” an unnerving lullaby that begins with a wail and only gets weirder from there. It serves as a quasi-anthem for both the artists and the surfers, who are united in their free-spirited rebellion. The song could read as a tongue-in-cheek riff on the notion of surfers as the ultimate bad boys, but VanWyngarden is intent on staking that claim for himself. “Connan and I are, by nature, really bad boys,” he says, trying to sound serious on the phone from his house in Rockaway, New York. “We are as bad as they come. We’re just making sure that people know that.”

The song is one of four the pair created for the film, and it clearly served as the perfect outlet for the longtime friends to finally, properly collaborate. Other than Mockasin’s guest appearance on MGMT’s latest album, Little Dark Age, VanWyngarden says they’d mainly just “played together live a bunch, hung out a bunch and listened to music.” 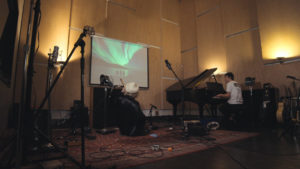 Connan and Andrew in the studio

The two artists share more than just a penchant for psychedelic pop—they’re also both keen surfers. “Connan grew up surfing, and I’ve been surfing for like ten years,” VanWyngarden says. “I was working on the second MGMT album, we were staying in California, and I learned to surf in Malibu.” It turned out to be a formative experience; VanWyngarden says he moved to Rockaway upon his return to New York City, and has lived and surfed there ever since.

The film’s inherently experimental nature seemed to inspire the pair to let their freak flags fly. Their songs bloom throughout with spindly synths, warped singing, and lo-fi beats created on VanWyngarden’s eight-track tape recorder. “We got kind of silly and abstract,” he explains. “It was a real bonding trip for me and Connan. We probably annoyed people with our never-ending Björk impressions.”

Their recording session took place later, at VanWyngarden’s house. They didn’t do a live score while watching the footage, as Peaking Lights did in their LA studio; instead, these two relied on their recollections. “We had our memories and we had just lots of funny stories from the trip that we were trying to incorporate into the feelings of the songs. I actually had a phone voice memo of this guy that we called The Ox…” Suddenly, VanWyngarden’s voice becomes muffled and he explains he’s been interrupted by his cat tearing up a T-shirt. “He’s just so bad!” he exclaims. “He’s constantly doing really bad things. And you can’t really discipline cats; they don’t listen. I mean, Connan is a real bad boy too, but you can discipline him.” 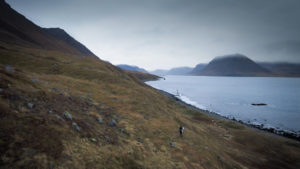 He returns to his story about The Ox. “He was one of our local surf guides in Iceland who was taking us around. He was really sweet, and he was telling a story about an Icelandic folk song that he would sing about these fishermen when he was little. I slyly recorded it, and we made one song that I don’t think made the film, but it uses a cut-up version of the iPhone voice memo,” he laughs. “We were just trying to have fun with it and get really experimental.”

“In Iceland there’s psychedelic mushrooms growing in the grass everywhere, and I started just eating them whenever I could, ’cause they weren’t very strong.”
–VanWyngarden

One song that did make the cut is “Mountain Pass,” which was inspired by a perilous journey in a “souped-up old white campervan” through some particularly treacherous terrain. “We were taking this long trip to a waterfall through these really sketchy mountain roads—there were ice pellets all over the road. I remember Connan was really nervous. All we could do was laugh, ’cause it felt very dangerous. But we ended up at these incredible remote fjords with a natural hot tub, looking out over this empty landscape. It was really magical.

“Also, in Iceland there’s psychedelic mushrooms growing in the grass everywhere, and I started just eating them whenever I could, ’cause they weren’t very strong. You could just keep popping them, so I was doing that too,” VanWyngarden adds. 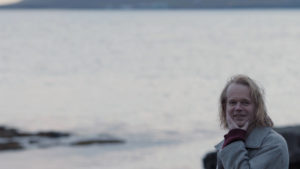 Considering it was a pretty magical introduction to composing music for film, it’s hardly surprising to hear that VanWyngarden is eager to do it again. In the meantime, he and Mockasin are scheduled to perform a live score at the film’s premiere tomorrow at The Palace Theatre in Los Angeles, along with Allah-Las. But he jokes that he and Mockasin might not even show up. “Just so people understand how serious we are about how bad we are.” If they do show up, he says, they’re “definitely going to wear all black leather outfits.”

Before we hang up, VanWyngarden wants to point out the efforts of the crew who took them around Iceland. “They were really vital to the whole trip. And they were sweet to us and they took us to these secret spots that they’re probably the only ones to know about! So they definitely deserve a shout out,” he concludes. Maybe he’s not such a bad boy after all. FL