Inspired by this year’s lineup at Secret Solstice in Reykjavík, we spoke to some of the local scene’s unsung heroes.
Menu

Inspired by this year’s lineup at Secret Solstice in Reykjavík, we spoke to some of the local scene’s unsung heroes.

Yeah we know: the words “Icelandic Music” probably conjure up images of Björk and Sigur Rós, music videos filled with glaciers and waterfalls, and remind you of the fact that their government actually gave Björk an island as a thank you for her cultural contributions (nothing but respect for our elf president).

But with a population over 330,000 and almost as many bands (not an official headcount, but close) there’s a lot of people making music that doesn’t directly slot into an Icelandic Tourism vid. Inspired by this year’s genre-gobbling lineup at Secret Solstice in Reykjavík, we did a deep dive into some of the unsung heroes from the local scene.

From a dancing funk queen to Eurovision rebels, here are four Icelandic artists from across the creative spectrum worthy of additions to your musical rotation. 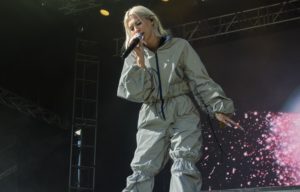 BRÍET writes big, emotional songs reflecting on the tangled nature of love. But to hear the nineteen-year-old explain it, music and romance have always been intertwined. The music might be polished to a perfect pop shine (she is, after all, a fan of Miley Cyrus), and her confident stage presence might suggest the kind of artist ready for a Robyn opening slot—but all of BRÍET’s euphoric, larger-than-life songs come from a very real place, with hyper-personal lines like “I miss you in the rainy weather / That’s when it’s worst, that’s when it hurts / And now it’s pouring down.”“I try to be as much my persona and in my music and lyrics as I can,” she says. “I would never write something I haven’t felt before or my friends haven’t. I write songs that I feel come from friends or me. It’s important!”

She’s also loyal to a theme, something BRÍET admits to with a laugh. Her initial foray into writing happened in tandem with her first heartbreak, an emotion she’s still happy to explore.

“He was my first kiss!” she admits of the fleeting love she experienced as a thirteen-year-old. “He lived in London, so we knew we were never going to meet each other again. It was really hard, because he was so beautiful.”

If there’s a romantic fate guiding her song topics, though, BRÍET also believes in a professional kismet. So much, in fact, that as a young teen she recalls hearing a friend declare she wanted to be “either a singer or a nurse,” and the young musician realized she didn’t have the same options—a belief that, as she’s working on her full-length, she still finds directing her today.

“I decided I’ll never have a Plan B. I’ll keep going until it works,” she says with determination. “That’s when I decided: I just wanted to do it. Just go for it. Plan B just gives you a chance of failing. You just have to fall and get back up and try again.” 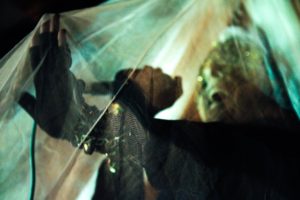 The artist who created Mighty Bear (who locals might recognize as a member of post-rock outfit We Made God), is at a loss for words when asked to describe their solo project, a dark, gender-bending electronic musician/character born of both a love of drag and a childhood spent listening to David Bowie and Marilyn Manson. Thanks to multimedia performances and stage outfits that include face-covering gold veils, the project has taken on a life of its own—and yet, it can also be clearly traced back to the person who first crafted it.

“It’s something that I created, and it’s so fully me that I can’t put a label on it,” they say, choosing their words carefully. “I came out of the closet super late…I wanted to create Mighty Bear because I’ve had a strong connection with my feminine side. I kind of want to express that. But I’m very secure in my masculinity. I love that about me. So, Mighty Bear was born out of a desire to express.”

The music that this otherworldly character feels plucked from The Upside Down, full of hip-hop beats and dreamy soundscapes, intermingling with washes of melodic synths and Mighty Bear’s theatrically growled Icelandic lyrics. Although willing to provide English translation, singing in their native language was a conscious choice—even if they warn they might one day switch linguistic streams.

“The Icelandic language is so beautiful and it’s easy to be poetic,” they laugh, revealing that the slated upcoming Mighty Bear EPs—numbered one through three in Icelandic—also translate to the words for “Alone,” “Bond,” and “Home.”

“Everything describes what it is,” they continue. “Creating lyrics in Icelandic you don’t beat around the bush. I’m turning thirty-three and I’m one of the last generations that will fully speak Icelandic. Kids born in the ’90s, they speak it, but it’s not the old school. That’s why I wanted to create this in Icelandic. To leave a legacy.” 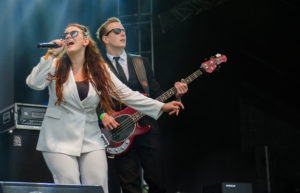 Una Stef has a golden laugh which she unleashes frequently while discussing life with her band, The SP74. The singer/flautist (“I think it’s obvious that Lizzo and I are related,” she says of playing the instrument onstage, deadpan, “or the same person”), takes funk/jazz/pop fusion music very seriously, even if the descriptions come with a few giggles.

“It’s not pretty and it’s not polished,” she says of her funk leanings. “But it’s still groovy. I think it has all the genres I related to: Soul and jazz and rock and roll. I think you can find a little bit of everything in funk music. It also gives you space to be loud and just have fun with it. You can’t be very serious, you can be very funny. There’s a lot of freedom.”

Case in point: her hero, James Brown, whom Stef recalls being enchanted with at an early age when she watched his unhinged performances—including a memorable moment where he freestyled about food, something Stef claims she needs to try.

“It would definitely be something about carbs,” she laughs. “Italian food. There would be a lot of pasta in it!”

It’s a delicious concept endorsed by The SP74. Friends since their days in jazz school, there’s a comfortable shorthand among the sextet, with Stef acting as its de facto den mother. It’s this teamwork that brings the singer the most joy, even if the only time she listens to her music is when it comes on the radio while she’s driving.

“I make sure the windows are closed because I’m not going to be seen out in public listening to my own music!” Stef says, sheepish. “But it makes me happy, it makes me proud because we put a lot of work and love into everything that we do. In the car is literally the only time I listen to my songs. After studio work I’m like, ‘Get it out of my face!’ A song is never going to be at the point I imagined it could be. I’m so at ease with that, and I feel like I’m so OK with it now that I’m almost too OK with it. But that’s why you surround yourself with good people.” 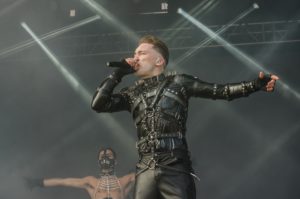 When Hatari appeared at this year’s Eurovision Song Competition hosted in Israel, they caused a stir by displaying a Palestinian flag, which was quickly cut from the broadcast. That may have seemed like a dramatic political statement—but for the punk/hardcore trio, the display felt like one of their less intense positions.

“It looked to us like Eurovision was about to take place without even mentioning the existence of Palestine,” says frontman Matthías Haraldsson with a shrug. “Which seems odd of a contest that claims to advocate diversity, unity, and peace. We saw that there were plenty of Israeli flags being waved. As a huge number of the host country identify as Palestinians, we thought, why not add another flag?”