LIVE, IN PHOTOS: Janelle Monáe at the Manchester International Festival

Nothing but respect for our queen.
Menu

LIVE, IN PHOTOS: Janelle Monáe at the Manchester International Festival

Nothing but respect for our queen.

The 2019 Manchester International Festival (ongoing until July 21) features an original play about the aftermath of the South African apartheid co-developed by Idris Elba, an exhibition of David Lynch’s art, and a gathering arranged by Yoko Ono during which bells were rung for peace. Given that level of out-of-the-box creativity, it seems fitting that the event also included an opening-night performance from Janelle Monáe. 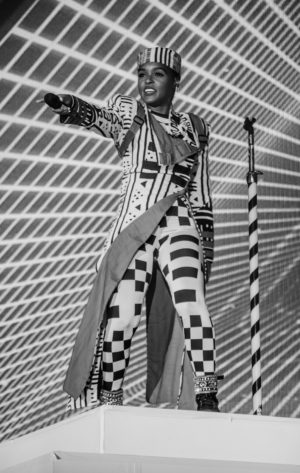 Castlefield Bowl, a venue located over one of Manchester’s canals, was packed with fans celebrating the artist’s genre-gobbling, outsider-friendly pop. (It’s telling that Monáe has referred to herself as a “free-ass motherfucker,” and even has the slogan emblazoned across selected merch.) Plucked largely from her third album Dirty Computer, with the obligatory appearance of her 2010 breakthrough single “Tightrope,” the show moved quickly and featured plenty of theatrics—including 2001: A Space Odyssey walk-on music, a coronation, multiple costume changes, dancers with water guns, and references to her alter-egos, an android named Cindi Mayweather and Django Jane.

But even billed as the “Dirty Computer Experience,” it’s impossible to forget the artist at the center of this show. With the charismatic smile of pop royalty (and of someone who maintains a side-hustle acting in major films), Monáe sang, rapped, and emoted her way through the thirteen-song set, connecting with audience members onstage when she brought a handful up to dance through “I Got the Juice,” and off-stage when she stripped down and jumped into the kneeling crowd. 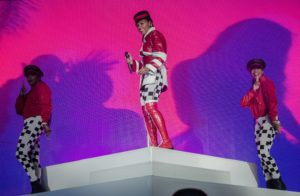 Janelle made a personal appeal to protect marginalized communities, including the LGBTQI, disabled, and low income—plus, in the most fitting Fourth of July message of all, she encouraged Donald Trump’s impeachment. While many British fans took to Twitter to call that statement gutsy, it felt like a logical extension of Monáe’s idealistic worldview, and a more than fitting coda to the energetic and timely performance.

See more Janelle pix in the gallery below.