Running Away with Carly Rae Jepsen

The cult pop star loves traveling, and says it has shaped both how she looks at the world and at herself.
Menu

Running Away with Carly Rae Jepsen

The cult pop star loves traveling, and says it has shaped both how she looks at the world and at herself.

On her 2015 single “Run Away with Me,” Carly Rae Jepsen sang about the romance of packing up and leaving everything behind. The reality of doing that, of course, isn’t quite so romantic, as the Canadian musician recently discovered on the first night of her solo trip to Italy.

“I’m such a pampered baby when I travel with my crew,” Jepsen laughs. “They’re always looking after all the details. On my trip to Rome, I texted my assistant and said, ‘I suck at this travel thing alone. I already forgot my credit cards!’ She had to FedEx them to me the next day. Which was laugh-worthy…I’m describing myself as a total ditz! But no one saw that as more funny than I did.”

Despite the accidental under-packing (“Good music playlists are important,” she says of her new packing checklist. “The rest—passport, definitely credit cards this time, and go”), Jepsen considers her vacation in Italy—a.k.a. her first solo trip—a success. 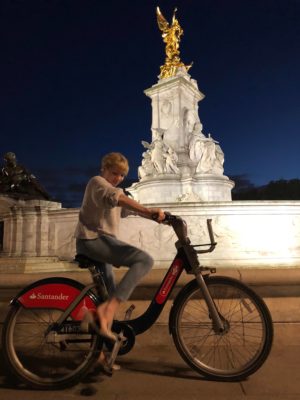 On a bike in London

Having traveled extensively for work since the release of her 2012 sophomore album Kiss, Jepsen is used to what she calls a life of “constant movement.” But even before she was the singer who got “Call Me Maybe” stuck in our heads, she was on the move—thanks to a family who loved camping and long road trips. On one memorable vacation when Jepsen was thirteen, they took that hobby international.

“Two days in Paris, two days in Amsterdam, that kind of thing,” she recalls. “I just loved it. We were camping in most places or staying in hostels. When I got a job as a coffee barista, I remember looking at the tip jar and thinking, ‘One day, I’m going to go somewhere.’”

“When I got a job as a coffee barista, I remember looking at the tip jar and thinking, ‘One day, I’m going to go somewhere.’”

Given the recent release of her fourth album Dedicated, Jepsen acknowledges it might be a while before she’s able to travel for pleasure again. (As we talk, she’s in the Amsterdam airport, preparing to board a flight to Japan for the next leg of her tour, where they’ve already hit seven countries in two and a half weeks.) But it’s something that’s always on her mind and a frequent topic of conversation, as she tries to get the scoop from those people who know best.

“That way some of the hidden information that might not be on the TripAdvisor websites is right at my fingertips,” she says. “I have used those types of websites as well, though. Also, I’m always inspired and romanced by a good movie. I think that’s half the reason I went to Italy.” 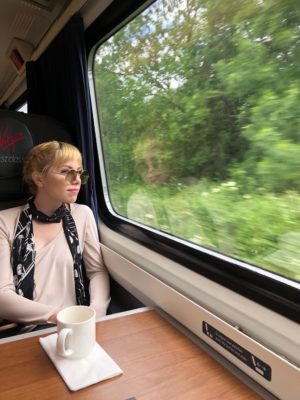 On a train in Italy

True to her word, Jepsen asks me about my travel experiences, and we briefly bond over a shared love of seeing the world. When I mention I’d like to visit the island in Malta where the 1980 movie Popeye was filmed—which featured the original Harry Nilsson song “He Needs Me,” an inspiration for Dedicated standout track “Everything He Needs”—she coos appreciatively. Although visiting Japan (“It’s like someone had created a country with my fantasies all wrapped into one beautiful place!”) and another South African safari are still among Jepsen’s travel goals, she’s itching to get back to Italy…and Malta isn’t too far away.

“I had so much fun in Italy. There’s people I’d like to take back to some of the stops I visited,” she notes. “I know that I’ll never forget the first time I came across the Colosseum—by mistake, by the way! I just took a wrong turn and saw it. And I gasped out loud. I think anything that does that, whether it’s a good meal or a building that’s so stunning it stops you in your tracks…I love sensations like that.”

Even though Jepsen might have required a little help from her team to achieve Italian bliss, she did find unexpected freedom in the transformative trip, one that’s making her consider more solo treks. The vacation was scheduled as a mental break during the writing process for Dedicated, where, deep into crafting what turned out to be around two hundred songs, she was feeling a bit lost. The singer-songwriter found her reprieve in a lot of dinners for one, and in making travel buddies. (“Strangers became friends to me,” she says happily.) Even as an internationally recognized musician, there was a comfortable level of anonymity built into the experience.

“It changes your relationship with yourself when you travel,” she says. “You get to face new challenges that shape how you look at the world and look at yourself. There’s freedom in fashion, because no one is expecting you to be the exact same thing that you were, because they have no previous expectations.”

So in 2016 when Jepsen’s label asked her to drop everything to come home and promote the song “Cut to the Feeling,” which had gained some traction in her absence thanks to placement in a Canadian film, she politely declined the offer. Even as someone who loves her job, what she learned during her time away made the decision easy: A strong work ethic is important—but that also means taking care of yourself.

“I knew that I needed to not go back to work yet,” Jepsen says. “I just started this thing. So, I’m going to stay. It was an empowering decision for me, because I’m usually on the hustle. This career can be an adrenaline rush, but it can take over your whole life. As I’m getting older, I’m learning that you can’t enjoy it if you’re not in a good headspace. For me, that does mean taking breaks every once in a while. I’ve learned that travel can be the most recharging thing.” FL

See a few more of CRJ’s travel pics in the gallery below.