A cool, cutting chronicler of all things California.
Menu

A cool, cutting chronicler of all things California. 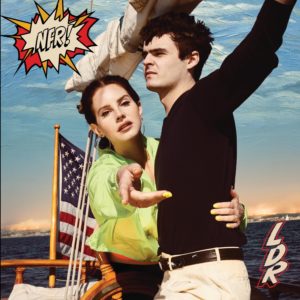 In Lana Del Rey’s America, no one gets out alive, or at least unfucked. In accordance with her sixth album’s dictates—its stories of lost values and lit cultures, ladies of the (Laurel) canyon, and a mellow soft rock sound—the singer/songwriter, along with everyone’s favorite collaborator, Jack Antonoff, fashions a modern take on Evelyn Waugh’s Vile Bodies. Rather than England between the wars, Del Rey’s Rockwell! finds her setting her harmonious, sundown tones to the gullies of fantastic LA in the ’70s, her questions to an isolated Trumpian moment, all in a voice less breathy (her usual) than smug and disgusted—but unlike Waugh’s satirical look at decadent decay, Lana isn’t joking around.

Whether recalling The Beach Boys’ latter period of shadows against the sunset (“The Greatest”), loping along tempo-wise while peering under the piers (“Venice Bitch,” “California”), or even covering the kings of Long Beach, Sublime’s snotty “Doin’ Time,” Del Rey once and for all has proven herself to be this generation’s Joan Didion: a cool, cutting chronicler of all things California.

Not only has she grown as a lyricist, Del Rey has moved beyond a snarky self (or selfishness) to tackle larger themes while remaining present, in the moment. She can write about a newly-blonde Kanye West making a mess of his life or the Los Angeles wildfires in “The Greatest” without seeming glib. She can harken back to Joni Mitchell’s quaint garden parties where women wore white and “levitated” or “meditated” (“Bartender”), while giving a lover credit where credit’s due—going from “You fucked me so good that I almost said ‘I love you’” (“Norman Fucking Rockwell”), to “Cinnamon Girl” and “If you hold me without hurting me / You’ll be the first who ever did.”

Or she could stay still and ride out the momentum of her best, clearest work to date, with the balladry of “Hope is a dangerous thing for a woman like me to have—but I have it” and “Happiness is a butterfly,” the latter of which acts as a handsome character study, be it of her or her listeners.

Either way, Del Rey and her noble Norman Rockwell-ian fantasies have moved past their original dreaminess and onto something harder and more real. Brava.