The romance-fantasy-biopic-drama about J.M. Barrie and the creation of Peter Pan turns fifteen.
Menu

The romance-fantasy-biopic-drama about J.M. Barrie and the creation of Peter Pan turns fifteen.

Welcome to Rearview Mirror, a monthly movie column in which I re-view and then re-review a movie I have already seen under the new (and improved?) critical lens of 2019. I’m so happy you’re here.

Fifteen years after its theatrical release, 2004’s romance-fantasy-biopic-drama Finding Neverland, about J.M. Barrie and the creation of Peter Pan, is hard to, well, find. It’s not on Netflix, Hulu, HBO, or YouTube. In the United States at least, you can’t rent it via Amazon Prime or in the iTunes store. And not that I would ever, ever illegally torrent a film, but for the sake of journalism I did check, and it’s not easily found on those sites, either.

To watch it for this column, I had to sign up for a Vudu account, which charged me forty-nine cents for a rental and still showed me commercials. Not a bad deal, but strange. Finding Neverland boasts an all-star cast (Johnny Depp, Kate Winslet, Dustin Hoffman, Julie Christie), garnered seven Academy Award nominations, and a Broadway musical based on the film (which is based on a play by Alan Knee) closed just three years ago. Sure, it wasn’t a particularly successful musical, and the film won only one of the Oscars for which it was nominated (Best Score), but still, shouldn’t this movie be more…present, somehow?

Maybe it’s a sign of the times. Finding Neverland was a Miramax production; hot off the massive success of Shakespeare in Love a few years earlier, you can see why the Weinstein brothers were eager to do another romantic drama about a famous playwright, and you can maybe see why the Weinstein brothers have other things to worry about these days besides making Finding Neverland available. Johnny Depp’s reputation is certainly lower today than it was at the time. And the genre of “the man genius who wrote something we all adore and did you know a woman was there?” feels pretty stale. Maybe Goodbye Christopher Robin (2017, about the writing of Winnie the Pooh) and Tolkien (2019, about the writing of The Lord of the Rings) were great, but I don’t know, because I didn’t see them, and neither did anyone I know.

In fact, if you go looking for a streaming version of Finding Neverland, you will instead find links to, and articles about, Leaving Neverland, the two-part HBO documentary about the child molestation allegations against Michael Jackson. Obviously, it’s not J.M. Barrie’s fault that Jackson named his private playground Neverland Ranch, and the movie does take place, you know, literally over a hundred years ago. But it all adds up to a situation in which I understand why the powers that be have sort of shoved this movie aside, why we’ve maybe erased it from our collective memories. Amidst so many, many (many!) Peter Pan adaptations, does anyone really give a shit anymore about that Miramax movie with the Depp and the thinly-drawn female characters?

Turns out, all this dismissal is, if not unwarranted, at least misplaced. Upon re-viewing, I found Neverland to be a fine, inventive, captivating movie that sticks rigidly to all the plot points and archetypes you expect, but with so much heart and sincerity that I’m reminded why “beautiful, dying woman” and “frustrated, uninspired writer” and “London high society” became tropes in the first place.

Like any origin story, it’s a bit predictable; we know Barrie (Depp) will turn his career around once he writes Peter Pan, just like we know the Titanic will hit the iceberg. And poor Sylvia (Winslet) has a small cough in the first act and dies of consumption by the end, as women always did in those days. But in between, there are moments of real magic. When Barrie plays with Sylvia’s children, acting out make-believe adventures that will end up inspiring the world of Neverland and the adventures of the Darling siblings, director Marc Forster and production designer Gemma Jackson give the games a homespun, crafty quality that’s like if Mary Poppins took her child charges into the world of Wes Anderson. The most compelling performance comes from teeny tiny Freddie Highmore as the sad and serious son Peter, basically two watery eyes and a little mop of hair, absolutely impossible to not fall in love with.

Adults have to make money and clean up and learn their lines and have difficult conversations so kids can play in the backyard and fly kites and laugh at plays.

Sure, there are issues to take with the storytelling. The female characters are either carefree or shrewish, and Barrie’s sour relationship with his wife (Radha Mitchell) is only halfway explained and never really explored. There’s an old lady who magically sums up the film’s themes during the second of her two appearances on screen, and the plot hinges on coincidence and timing to a silly degree. It’s all a bit pat, the way the main romance stays chaste and Barrie’s always so willing to admit when he’s been wrong, because the audience has to be on his side through every minute of action. Hoffman’s theater patron character is straight out of Shakespeare in Love, and Christie’s overbearing matriarch gets to hit all of two emotional notes, over and over like a binary spinster. But then again, I’m a sucker for a scene in which a cast of actors bickers backstage like family, and that score really is transporting, and do you remember the first time you flew a kite? It did feel like magic.

While the women subtly (and unsubtly) accuse Barrie of impropriety, it’s only his cricket club buddy who actually questions why a famous playwright is suddenly spending all day, every day, playing with someone else’s sons. He tells Barrie that there are rumors he’s sleeping with Sylvia, and there are whispers that he’s, you know, a Michael Jackson type. It wasn’t until the credits rolled that I realized Barrie’s friend is supposed to be Sir Arthur Conan Doyle, author of the Sherlock Holmes stories. No wonder he’s the one asking questions. (And speaking of questions: why aren’t these kids ever in school?) 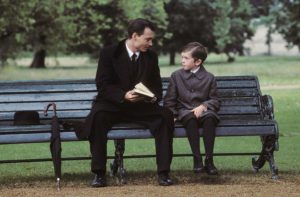 The infidelity thing comes up again, but the film isn’t really grappling with it. It’s not really grappling with anything. Its entire message appears to be “play with your kids,” which is nice but not exactly groundbreaking. It’s not until the final act that real ideas come up, about what it means to become a man and to no longer be a boy. There’s a lot of talk about what pretending can and cannot accomplish, and the limits of imagination—and some of it’s wise, and some of it’s repetitive. When Barrie puts off having a difficult but necessary discussion with his wife, he was wrong, he was too immature. A lesson, finally: for kids to be kids, adults have to be adults. Adults have to look after kids when they fly on ropes so they don’t fall and break a bone. Adults have to take their medicine so they can stay alive for their children. Adults have to make money and clean up and learn their lines and have difficult conversations so kids can play in the backyard and fly kites and laugh at plays.

I’m tempted to go on and on and on (and on) here. Peter Pan, the musical, was the first I ever saw on Broadway, and even though I was little, I refused to clap for Tinker Bell, not because I wanted the little light to die but because I was curious what the actors would do if no one believed in fairies. The next production I saw was put on by the eighth graders at my middle school when I was in seventh, and I sobbed at the end because Wendy wouldn’t get to see Peter anymore and I wouldn’t get to see my friends once they graduated. This was a year after I saw Finding Neverland in theaters and don’t remember liking it particularly, but my then-stepmom did, and would quote it sometimes, and maybe the only reason I perceived some sort of dark mark on this movie is that I associate it with her, and she kinda sucked.

Maybe what I’m sad and angry about is losing my own youth. Maybe I long for a time when I was ignorant of Depp’s alleged abuses, when the Miramax logo didn’t turn my stomach, when I wasn’t a movie critic, just a fan.

And then in college, I saw Peter and the Starcatcher, a modern play that’s a prequel to Peter Pan, put on by adults with all the heart and sincerity of children and with pared-down, homespun props and effects, and it was totally transporting and basically the best thing ever. And maybe what I’m sad and angry about is losing my own youth. Maybe I long for a time when I was ignorant of Depp’s alleged abuses, when the Miramax logo didn’t turn my stomach, when I wasn’t a movie critic, just a fan (that’s the big thing separating Shakespeare from Barrie: the critics). But I’ll stop and get back to the movie, because you can probably draw your own connections to the story of Peter Pan. Everyone can. That’s why it’s a classic.

The movie. It takes too long to end. Once the play is up and running, the essential tension is sucked out of the plot, but the characters linger on and it’s another fifteen minutes or so until we’re finally done. Along the way, the actors stage Peter Pan for Sylvia in her living room (she’s now too sick to leave the house), and our final vision of her is that she is magically stepping across the threshold into Neverland, a visual depiction of the death that should be gorgeous but honestly made me think, “Well, this is just like when Kate Winslet went to heaven at the end of Titanic. Kate Winslet sure does die in a lot of movies.”

The final, final, final ending is sort of ridiculously perfect: Sylvia grants her mother and Barrie co-guardianship of her four sons, and the perpetually Lost Boy finally gets a family. It seems too good to be true but also too bold to be fiction. I could look it up, right now, whether or not it actually happened like that, but I won’t (though you certainly can if you’re curious, dear reader—I give you permission). I could find all the ways that this movie about the true story behind the fairy tale is not true but a fairy tale, all the liberties it took and all the true historical details that will probably depress me because nothing’s ever as nice as it looks in the movies. But I guess something about this tidy, pretty movie got to me, because I’m not going to. I’m going to choose to pretend to believe that all of this happened exactly as screenwriter David Magee said it did. Everyone is good underneath, and orphans get to go to big premieres, and all of my grandparents are in Neverland playing with mermaids and pirates. Fuck it, here we go: clap clap clap! Don’t die, Tink! I believe in fairies! FL