Styles has a way of making music with plenty of discernible references, yet it somehow emerges as era-less.
Menu

Styles has a way of making music with plenty of discernible references, yet it somehow emerges as era-less. 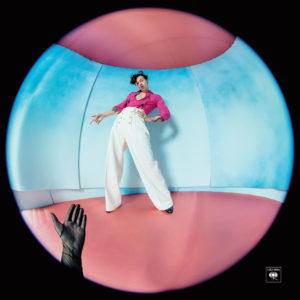 The boy band graveyard is littered with the properly cheekboned but marginally talented, though some went on to universal respectability (Justin Timberlake), some to genuine exaltation (Robbie Williams). None, however, have matched the galactic force that is former One Direction heartthrob/songsmith Harry Styles. His 2017 self-titled album was one of that year’s best—and it’s still pretty hard to get “Sign of the Times” out of your head. Also, the boy knows his way around an outré sense of style, marking him as an artist definitively in control of his presentation and destiny.

Now, he’s following all that up with the constantly surprising and musically accomplished Fine Line, an album that seems not to be angling for artistic cred as much as definitively marking Styles as a skillful pop stylist.

What’s most fascinating here is the level of unconcern for hitting any actual zeitgeist notes (for example, there are no misguided collabs with someone like Cardi B). The album opens with “Golden,” which comes off like a lost Badfinger track in its breezy, summertime-loving positivity. Next, “Watermelon Sugar” proves a kind of retro-soul-pop, with its funked out guitar riffs and winsome Motown harmonies. It feels wholly earnest and genuine, a rarity on the charts these days.

Of course, above all, Harry Styles is a lover. And with the utterly infectious “Adore You”—built upon fat ’80s synth riffs with shades of Pet Shop Boys—it’s hard to imagine anyone not falling for his offer to “Walk a fire for you / Just let me adore you / It’s the only thing I’ll ever do.” You can almost hear potential suitors swooning in the background.

Styles has a way of making music with plenty of discernible references, yet it somehow emerges as era-less. This technique is especially vivid on “Cherry,” a charmingly unassuming piece of hippie-medieval-folk, which could be a kind of asexualized addition to Led Zep III.

As a work of beguiling retro-modern pop, Fine Line is hard to find glaring fault with—but it’s also hard not to wish he had more aggressively summoned the improper, iconoclastic Harry we all know lurks beneath the surface, waiting for his moment.