“When you wanna leave, when you wanna get the hell out of here / But leaving is not an option,” Conrad Keely snarls through the thunderous art-punk din of “All Who Wander.” For a band that dreams on such a regal scale, the intimacy of the lyric stands out. And for Keely, that sense of displacement and claustrophobia defines the turbulent journey of …And You Will Know Us By the Trail of Dead’s first LP in six years, X: The Godless Void and Other Stories.

The multi-instrumentalist—one of the group’s two primary creative forces, alongside fellow drummer-singer-guitarist Jason Reece—started writing the album during a blissful five-year stint living in Phnom Penh, Cambodia. He moved there from Austin, Texas in 2012 after growing disenchanted with American life, and in this diverse cultural hub, he reconnected with music on a primal level—playing small shows with whatever style of band (from country to hip-hop) happened to need a drummer or bassist or harmony singer on a given night.

“There was a lack of judgements made about genres of music or quality of music,” Keely says. “I actually joined this country-folk band out there for a while. We’d play old bluegrass standards and sing three-part harmonies—things I would have felt very self-conscious doing in Texas.” He even recorded an eclectic solo LP, 2016’s Original Machines, that expanded beyond Trail’s signature sound.

“It was liberating,” he says of the uncynical, open-arms atmosphere of Cambodia. “By that point, we’d been doing the band professionally for fifteen or twenty years. To kind of stop all that and get back to the roots of the joy of music and why we do it in the first place, just out of love and community—it’s a bonding ritual there.”

But as a green card holder in the U.S., a resident alien with Irish citizenship, Keely was also faced with a painful reality: “I couldn’t remain in America without risking my resident status,” he says. “I decided, ‘Well, I can’t give that up.'”

The angst of “All Who Wander” reflects the inner turmoil he felt upon landing back in the States, realizing his immigration standing temporarily blocked him from a lifelong passion. “If I left, I’d have trouble getting back in. Our lawyer was very clear about that. It was the first time in my life I’d ever had any travel restrictions. Obviously I could still be in America, a very big country. But the feeling of not being able to travel abroad was depressing. I felt trapped, like I’d had my freedom taken away.”

Keely funneled those emotions into The Godless Void. Back in Phnom Penh, he had already stockpiled some cinematic new tracks, originally earmarked for his second solo project. But after playing them for Reece, his bandmate since co-founding Trail in 1994, he decided to switch gears—modifying the material into a song cycle based on variations of one musical motif.

“That was the original concept,” he explains. “There was going to be this continuous theme that flowed throughout the whole record.” It’s introduced in the chords of their grandiose “Opening Crescendo” and reappears in various forms: the bassline through the Peter Gabriel–influenced electro-rock of “Gone,” the main progression of the triumphant closer “Through the Sunlit Door.”

“Leaving a place I really loved and coming back to America—there was a lot of uncertainty there. I wrote that into the music. That was the one outlet I had.”

While not a traditional concept album, The Godless Void sure feels like one, utilizing those melodic reprises, subtly interwoven chord sequences, and winking nods to Trails past—including a chorus callback to their 2006 cut “Eight Days of Hell” in the middle of “Gravity.”  But the lyrics also form their own loose theme, unified in the underlying turmoil of Keely’s return to the U.S. Rounding out the melancholy vibe is “Don’t Look Down,” a “bittersweet break-up song” looking back at a long-distance relationship and the loss left in its wake.

“The lyric ‘Nights we raced around’—it’s literally about driving around town on motorcycles with all our friends, because that’s how you get around town [in Phnom Penh],” he says. “It’s a reflection on a magical time. And the chorus refers to that sense of a death-like state when you grieve, when you feel like a part of you has definitely died. But the positive side is the rebirth after a symbolic death, the closure of a phase in one’s life.”

Looking back at the LP’s early gestation, he notes he was in a “dark” headspace. “Leaving a place I really loved and coming back to America—there was a lot of uncertainty there,” he admits. “I wrote that into the music. That was the one outlet I had.”

Yet he felt comfort in the familiarity of the Austin scene—from the thriving local space-rock movement that inspired much of Godless Void to the “isolated community feel” of the city itself. Zooming outward, the country was (and remains) bitterly fractured on a cultural level, but Keely used that uncertainty to “reframe [his] situation.”

“The political climate made me think this was the perfect time to come back,” he says. “At a time when things are so divided and things are uncertain politically, America needs artists to unite people—to remind us of the things that matter, not the things that separate us.”

The Godless Void helped Keely reflect on his own priorities, strengthening his artistic bond with Reece. Though they’ve been the band’s dual leaders from day one, the duo always developed their songs with a rotating cast of players, including crucial early contributions from bassist Neil Busch and guitarist Kevin Allen—most famously on 2002’s Source Tags & Codes, still widely hailed as their masterpiece. Trail’s latest iteration has included bassist Autry Fulbright II and drummer/guitarist Jamie Miller, but for Void, the lineup essentially shrunk to Keely and Reece—rounded out by engineer Charles Godfrey and whoever else was free to drop by the lengthy sessions. (Fulbright and Miller—who were both busy with other projects—appear on various tracks, but will not tour behind the LP.)

“This was the first time we hadn’t created an album as a band,” Keely says. “We were really just working together.” It was a fruitful process, but also maddening: They worked on The Godless Void for nearly two years without a deadline, tweaking songs and refining arrangements until they nearly drove themselves crazy. “It was extremely frustrating,” he recalls. “But it allowed the record to be what it is. Nothing was pushed through incomplete or half-baked. In the past, everything was expedited. But with this one, we took our time.”

The album, of course, feels like vintage Trail of Dead—full of dreamy guitar arpeggios, colossal tom-tom fills, and dramatic dynamic shifts. But Keely still has trouble defining that spark, even as he continues to chase it—a healing force amid life’s cyclical chaos. “We’re focused on expanding upon a sound that we started at the very beginning,” he says. “It’s hard for us to even articulate sometimes. But Jason and I both hear it in our heads.” FL 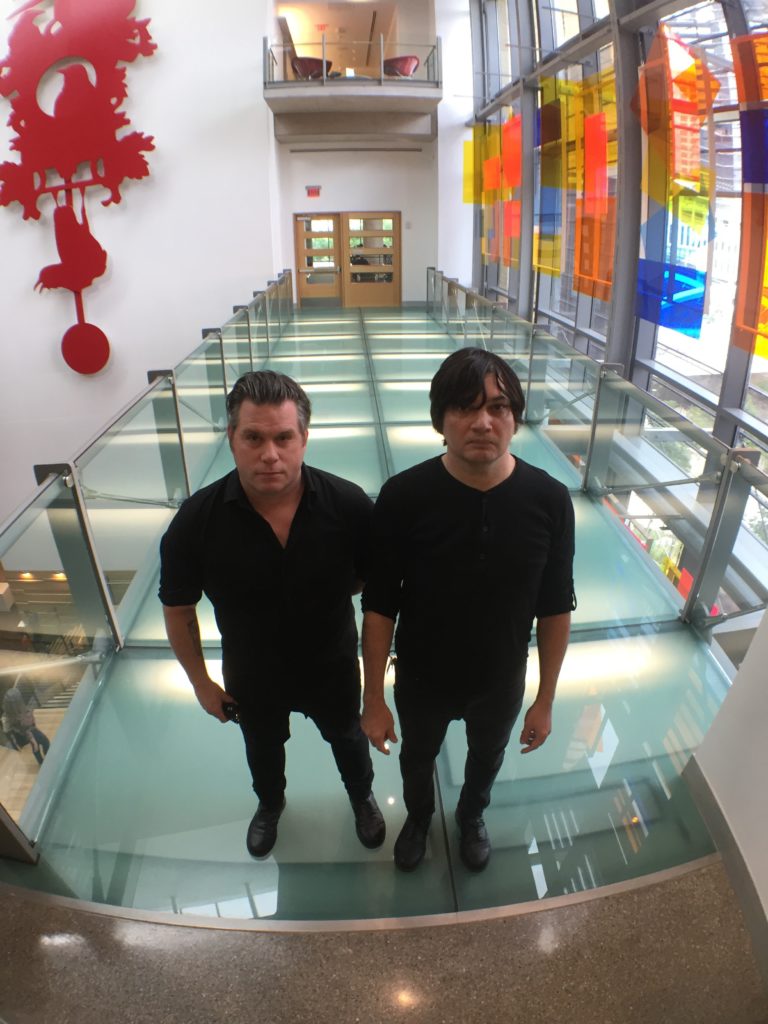