Destroyer, “Have We Met”

In many ways, a classic Destroyer record: cavernous and twisty and rich with atmosphere.
Menu

Destroyer, “Have We Met”

In many ways, a classic Destroyer record: cavernous and twisty and rich with atmosphere. 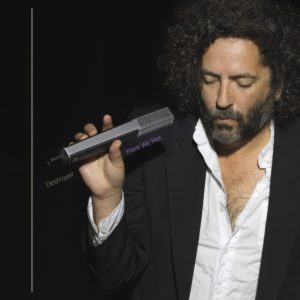 Have We Met
MERGE/DEAD OCEANS
8/10

“Crimson Tide” opens Have We Met, Destroyer’s twelfth album, unassumingly enough—bare-bones, unbothered, self-deprecating (“I was like the laziest river, a vulture predisposed to eating off floors”). Given a little time, though, it unravels into something major, a kinetic and propulsive monolith of an opener somehow both welcoming and treacherous. That’s the constant throughout the new record’s ten songs: straightforward, inviting terrain that’s more sinuous than it first appears, complicated by cryptic and nebulous contours.

Early reports billed Have We Met as Destroyer’s big step away from the robust full-band sound typically embraced by the Canadian group, with electronic elements spliced over Dan Bejar’s stripped-down skeleton demos. All that is technically true but a touch overstated. The finished product hardly stands as a jarring departure; this is, in many ways, a classic Destroyer record, cavernous and twisty and rich with atmosphere, anchored by all the familiar touchstones fans have come to expect. But the surprising electronic flourishes also make Have We Met an ever-so-subtly different animal.

Bejar remains as fatalistic and darkly funny as ever: “Just look at the world around you / Actually, no, don’t look,” he deadpans at the outset of “The Raven.” And he has curated music to fit the mood, oblique and gloomy but sneakily hypnotic. The chugging “It Just Doesn’t Happen” is fluorescent, almost danceable, but still shrouded in a certain darkness. The free-form haze of “The Television Music Supervisor” floats further and further into space as you try to grasp onto it, uninhibited by focus or structure but more arresting with each listen. “foolssong,” the album’s closer, has a similar effect, fading away in a warm ambient haze.

Have We Met is one of those albums that raises more questions than it answers. This is not a grand personal or political statement, and Bejar’s tossed-off vocals and stream-of-consciousness writing are not for everyone. But with time, the record reveals itself to be one of considerable depth and feeling. It’s elusive, but worth giving yourself over to.