Brendan Benson Is Holding On with New Album “Dear Life”

The Raconteurs guitarist/singer reflects on his seventh solo album, his fear of dying, and preventing insanity during a lockdown.
Menu

Brendan Benson Is Holding On with New Album “Dear Life”

The Raconteurs guitarist/singer reflects on his seventh solo album, his fear of dying, and preventing insanity during a lockdown.

It’s 4:20 p.m., Central Time, and Brendan Benson is a little nervous. He’s been practicing and is about to go live for whoever will listen. When the COVID-19 pandemic hit, Benson was preparing to release his seventh album, Dear Life. Instead, he’s home in Nashville, and—for just a few moments each day—he’s a “Boy in a Bubble.” Coincidentally, Benson does feel like he’s trapped in some sort of illusory, encapsulated dream, but “Boy in a Bubble” is the moniker for his Instagram Live series, an essential reprieve from the coronavirus lockdown.

“It’s something to do every day and something to prepare for,” says Benson. “A lot of times, I have to pick the song and learn it, and I get nervous, so it’s a kind of whole arc to my day. It’s a great way to break up the day and the monotony. If I didn’t have this, I think I’d be going fucking crazy.”

Benson, founding guitarist and co-writer for the Jack White–led troupe The Raconteurs, hasn’t gone stir crazy (yet) thanks to IG live—broadcasting with special guests or just going solo—but being home with his seven-year-old daughter Adeline and nine-year-old son Declan has its challenges.

“The rest of my family are going crazy. Kids need your attention twenty-four hours a day from the second you wake up, like, before you wake up.”

He’s living through what most parents are facing during the shut-in. “The rest of my family are going crazy,” says Benson. “Kids need your attention twenty-four hours a day from the second you wake up—like, before you wake up. We’re doing OK, though. It’s a good chance for us to get closer.”

Playing tracks off Dear Life, as well as older songs—even leaving his 1996 debut One Mississippi open for more exploration—Benson is just warming up for when life gets back to normal and he can tour again.

His first release since 2013’s You Were Right, Dear Life is Benson’s transfixion on domestic life, relationships, and the realization of his mortality. For nearly five years, Benson was hanging on to Dear Life since he started writing it. Then, The Raconteurs regrouped, and he stepped back into the band’s third album—and first in eleven years—Help Us Stranger in 2019. “I stopped, I did The Raconteurs, but I was really anxious to get this record out,” says Benson. “Then, this fucking virus hits.” 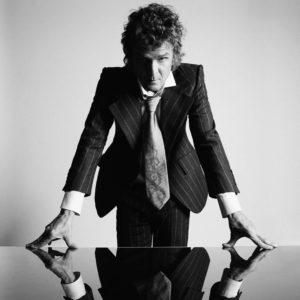 The road leading to the album has had its U-turns and swerves. It was even birthed from a complete upheaval of Benson’s Readymade Studios, which he started in 2012. When he was forced to vacate the studio after the building where it was housed was sold and converted into a parking lot, Benson was forced to pack up all of his equipment and put it in storage. Left without a place to record, he created a makeshift studio in his home, at first experimenting without guitar and drums and more software and drum machines, which all have their place on Dear Life, dusted over sharp riffs and penetrating lyrics on the knowns and unknowns in life.

Sequenced by Jack White, Dear Life drives down a winding road of reflection—good and bad, fear or moments of tranquility—that only Benson could steer, from frenetic opener “I Can If You Want Me To” to the more elevated “Good to Be Alive.”

Reflecting on family life, “Richest Man,” which received an animated video treatment by New York cartoonist Michael Wartella, Benson confronts his fear of dying as matter-of-factly as he can singing “I gave you your name, but you gave me my life … And after I’m gone, you’ll carry on / And then you’ll have a family of your own.”

Exploring domesticity and the delicacy of life, Benson covers all corners of emotion, gently crooning the title track through airy “Baby’s Eyes,” the latter the only Dear Life track that features a co-writer and outside musicians, including Dynamites drummer Jon Radford, and on to a more enraged “Freak Out.”

Opening up about family, life, and death is also something new for Benson, but it’s been lingering on his mind more since having children. “I don’t think I ever thought much about my mortality, so it’s kind of come as a shock I guess,” he says. “When my kids were born, I think, is when I started to fear death. I started getting afraid of leaving them. I was just confronted all of a sudden with, ‘Holy shit, I’m not going to be here forever.’ Your kids keep growing up and they keep getting older. I’m seeing it and I’m like, ‘Stop!’”

Departing from the core subjects, “Evil Eyes” confronts a plethora of toxic relationships. “Let’s just say it’s a composite,” says Benson. “Maybe it’s different people—not necessarily all female, or a girlfriend, either.” On “I Quit,” Benson borrows from Peggy Lee’s melancholy 1969 hit “Is That All There Is?” “It’s sort of an homage, but otherwise it’s just one of those songs that kind of came out exactly as you hear it,” says Benson. “There are no chord changes. It’s just, like, three chords over and over, and lyrics that are sort of improv or freestyle, and impromptu.”

“I think I’m half conscious when I’m writing songs. It’s not like consciousness. It’s like I’m speaking in tongues.”

Generally, songs evolve over time for Benson since he says he’s not fully cognizant when he’s writing. “I think I’m half conscious when I’m writing songs,” he says. “It’s not like consciousness. It’s like I’m speaking in tongues. It’s not some sort of, like, meditative state where I’m channeling or tapping into my deepest feelings, and I understand it, and I can sort of transcribe it in this poetic way. It’s mostly meandering thoughts.”

Song meanings tend to come later on. It’s as if he’s unconsciously confessing or revealing things as he goes along. “What’s interesting about this record is that when I look back on it, having been so out of it while writing it, it’s all really kind of focused,” says Benson. “It turns out it’s a lot about life and death and family, you know, so I did it sort of unconsciously.”

Writing for himself is one thing. He’s acclimated to his own, internal cacophony of fragmented words and melodies. Unconscious or not, it’s his own sinuous process. He’s tried working the Nashville co-writing thing but says he’s not that good at it. “I don’t think people are using producers really anymore, so it just doesn’t pay the bills,” says Benson. “I kind of screwed myself, because I left my solo career by the wayside.”

Writing for The Raconteurs is another thing. “We’re meant to write together,” says Benson. “It’s easy. We don’t talk about it. We don’t analyze it. We just know what sounds good, or cool, like, ‘Oh yeah, that sounds like it belongs in the song.’ [Jack] understands when I go meandering, and he gets it.”

Now, Benson has a record he wants everyone to hear. “I’m having to start over,” he says. “The Raconteurs helps a little, but it doesn’t help as much as people think, because people don’t know me from The Raconteurs. They know Jack. Brendan Benson is not a household name.”

It’s also Benson’s first album on Third Man, which he says was a “no-brainer.” He’s not sure why he never worked with White’s label prior to Dear Life, but admits he may have been too proud to ask. “I didn’t want to ride his coattails, but it just makes sense now, because there are no labels left,” says Benson. “And he’s really good at it.”

Benson is ready for Dear Life, and admits that he hasn’t felt this proud of one of his albums since 2002’s Lapalco.

“I think I made it for all the right reasons,” he says. “Those reasons were just for the fun of it, and the enjoyment of it, and the therapy of it—not because I had to contractually, or because it was expected, or that it’s been too long since my last record. It just comes straight from the heart.”

In the meantime, as he waits for the world to open back up, he’ll remain a Boy in a Bubble.

“It keeps me sharp,” says Benson of his ongoing IG Live sessions. “Usually when I go on tour I have to learn a bunch of new songs, or ones that I’ve forgotten. This way, I’m kind of just keeping them fresh. When we get out of this, whenever this is over, or when things open up and we get out of jail five years from now, I’ll be ready.” FL