The songwriter discusses his sprawling debut and his relationship with Sacred Bones.
Menu

The songwriter discusses his sprawling debut and his relationship with Sacred Bones.

You probably recognize Caleb Landry Jones from his role in Get Out, a bizarre movie where he plays a bastard, or his role in Twin Peaks: The Return, a bizarre TV series where he plays a bastard. While he’s dabbled in some more accessible projects (“safe” films, as he calls them), like American Made, Jones seems to feel most comfortable playing deplorable characters—or sympathetic characters caught in deplorable circumstances, such as the throes of heroin addiction, or the Cronenberg extended universe.

But when I called Jones up to talk about his long-awaited debut LP, it was immediately easy to put that deeply ingrained idea of who this person is behind me and talk to the real Caleb—even though The Mother Stone, this new record, reinforces the grotesque imagery of his films. From his parents’ farm in Farmersville, Texas where he’s quarantined, Caleb laughs a bit too generously at my jokes, and spends much of the interview crediting his film and music collaborators’ genius. Within a few minutes of asking questions, he sincerely thanks me for taking the time to listen to the record, explaining that he’d understand if I’d had family in the hospital preventing me from doing so, sounding genuinely relieved when I assure him my family’s all doing OK.

The Mother Stone is long and strange and psychedelic—it doesn’t sound like Landry’s voice as we know it singing on the record’s fifteen sprawling, proggy tracks, but many of the songs crack in the same way a typical CLJ character does, revealing something sinister underneath an innocent homage to The White Album and Dark Side of the Moon. With the additional unsettling visual cue of the “Flag Day / The Mother Stone” music video, the project feels particularly Lynchian—and I don’t mean that as a lazy synonym for “surreal,” I mean it looks and sounds like something only David Lynch could pull from the darkest parts of our collective unconscious.

When I caught up with Caleb, he was still about a month out from The Mother Stone’s release date, and when I ask him if he’s been productive in his state of quarantine (“You’ve always gotta be productive,” he laughs) he assures me that a song or two get written between all the YouTube videos he’s been ingesting. We go a little deeper into songwriting, connecting with Sacred Bones, and his introduction to film in the Q&A below.

You’ve been carrying these songs around for a while—what happened that you were able to sit down and map out an album?

I was doing movies in Bulgaria and Toronto, and on one of the films I had a guitar with me, and on the other film there was a piano. The one with the piano led to the theme in the first and last tracks, and then when I had a guitar I started writing what is the rest of the record. Then we went to New York for the last week of filming and I finished writing the record there.

Then I had to go back to LA. Since I had enough money from this one film in particular, The Outpost, I was able to get in contact with a guy named Nic Jodoin who I’d been in contact with before, but couldn’t afford to get into a room with for an eight-hour session. If I could, I’d book one day or something. But now we could do a week or a few days, so I was lucky enough to get that time.

So I came in, we started the record, and then Nic came aboard real quickly and we started making it happen, and then spent the rest of the year off and on whenever we both had time to record it. We kinda hacked away at it as fast as we could in the time we had. But we called it at some point—“OK, that’s enough [laughs]. I think we’re pretty juiced.”

Did you write the songs on The Mother Stone recently?

I was in a band when I was a teenager called Robert Jones. When I left for college I was on my own, so I started playing a little more with guitar and keyboard, teaching myself to make more melodies. And then I bought a 2008 Mac and started using the built-in microphone to record, making as much music as I could until something called and I had this feeling of, “If I’m gonna go make movies, I need to do it right now. Music’s gonna take a lot longer—if I start acting, I think I’ll be able to get into films a little bit faster.” 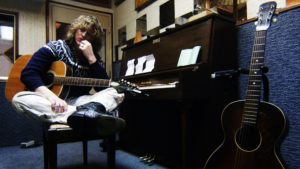 So all these songs, I do them in between films to keep from having a breakdown or whatever. I’d write songs when I wasn’t filming, and then whenever I was able to get a chance I’d come home to Texas to see my family. I was spending hours in the barn with coffee and instruments, and then I’d go back to Los Angeles and work again. The latest record, if I didn’t do it in a studio, I would have done it in a barn. But I’m glad it worked out differently, because that led to Sacred Bones putting it out.

What did you know about Sacred Bones before this record? I read you found them through Jim Jarmusch?

Yeah, before that two others over the last ten years have told me about Sacred Bones at one point, and Jim was the first person that said, “Man, this guy Caleb [Braaten] over at Sacred Bones would really be down. Would you like me to introduce you to him?” I’ve been waiting for the right people to put out my music for a long time, and suddenly it felt like this was an opportunity that would be missed if I didn’t act upon it.

Did you know any of the artists on the label beforehand?

Yeah, I’d seen Pharmakon before on Adult Swim, and I did a film where the director, Peter Brunner, was initially wanting to get her to make music for the film. For a few reasons, it didn’t work out, and we had to do something else. But he was the second person to kind of say, “Man, these folks at Sacred Bones I think would get what you’re doing and be into it.”

“There are so many people on this planet, and so many of us are sharing something with each other. And so much of it is just a regurgitation of what was for breakfast. Hopefully I’m regurgitating what I had for breakfast in a slightly different way, a more digestible way for the baby birds.”

I didn’t know many of the other bands at the time. I just knew about this label and that they were real mysterious, it seemed like [laughs]. There was some magical something coming from that side of the water. Then when I spoke to Caleb, we just got on really, really, really well, I liked him right off the bat—I hope he liked me right off the bat. He just felt like someone you could go down the rabbit hole with in that kind of way. And then, of course, I knew about [John] Carpenter, and Jim [Jarmusch], and [David] Lynch being on the label.

Did David Lynch’s music inspire yours at all? It kind of seems like you work with the same strange ideas in your music.

Yeah, I’ve heard some of his music, though I haven’t heard a full album. I really like the video for “Crazy Clown Time.” I really, really love that video. I think that was the first thing I saw of his music as something separate from his film work. When I saw that video it definitely helped support some ideas that I had about some other things. His work has done that in the past quite a bit, as with a lot of people, probably.

I’ve been inspired by various films—inspired in many ways, whether it’s creatively or not. I saw Eraserhead when I was seventeen or eighteen around the same time I saw Jim’s work, and Godard and Fellini’s work for the first time. It was a part of the beginning of me exploring these kinds of filmmakers versus filmmakers that I was allowed to see as a kid—the “safe” ones that really weren’t safe at all sometimes, but appeared to be [laughs].

There are so many people on this planet, and so many of us are sharing something with each other. And so much of it is just a regurgitation of what was for breakfast. Hopefully I’m regurgitating what I had for breakfast in a slightly different way, a more digestible way—no pun intended—for the baby birds.

Did you have any plans to tour at all with the new record?

We don’t have any plans set in stone as far as visual representation of what the music will be on a stage, but we’re definitely planning on making things walk at some point. Just don’t know where and when yet.

What current bands would you want to be touring with if you were touring?

I really haven’t thought about it. Hopefully we won’t have to—hopefully it just happens. Hopefully someone else says, “Yeah, we’ll play on the same bill.” Maybe we’ll just get Fix It Again Tony to come up on the stage and we’ll just run the truck for fifteen minutes before the show and get the whole room full of exhaust, and then bring out a vacuum with giant eyes and suck it all up, and then maybe I’ll come out from inside the vacuum or something.

Well no, I haven’t. Hopefully that doesn’t happen. FL