Behind the Music That Drives “Killing Eve”

We spoke with composer David Holmes from Unloved and music supervisor Catherine Grieves about the show’s killer soundtrack.
Menu

Film + TV
Behind the Music That Drives “Killing Eve”

We spoke with composer David Holmes from Unloved and music supervisor Catherine Grieves about the show’s killer soundtrack.

There are a few key characteristics that scaffold Killing Eve, the darkly comedic spy thriller series from the BBC. The obsessive relationship between MI5 security officer Eve (Sandra Oh) and assassin Villanelle (Jodie Comer), for one—their hunter and hunted roles alternating at regular intervals all the while maintaining a sexual undercurrent. Another is the fashion, where Villanelle goes from stylish to outlandish and Eve goes from casual to frumpy. There’s the picturesque locations, zigzagging across Europe from Paris to Bucharest, Tuscany to Barcelona, Oxford to Amsterdam, shooting with National Geographic–level expertise. And then there’s perhaps the most stand-out characteristic of all: the music.

Like all aspects of Killing Eve, the music forges its own path, both in original score and sourced songs. Seasoned music supervisor, composer, and head of film and television at Faber Music, Catherine Grieves, is one of the mind’s behind the music’s genius, and the other is multiple Ivor Novello Award–winning composer David Holmes, revered producer of his own cinematic albums (and Noel Gallagher’s Who Built The Moon?) and one third of the group Unloved alongside keyboardist/producer Keefus Ciancia and vocalist/lyricist Jade Vincent.

“From the beginning, everybody involved wanted music to be a big part of Killing Eve,” says Grieves, who was brought on early in the project. “It was such a bold script and such a bold premise, it needed to have somebody confident who could really drive the drama.”

“When I was approached to do Killing Eve,” says Holmes, “I said two things: one, the music should be female-led, and two, whatever country we’re in, it should have music from that country. I sent them a big folder of ideas, with some Unloved tracks in there that I’d hand-chosen. I got the first episode back and there were three Unloved tracks temped to it that fit like a hand to a glove.”

Unloved’s songs make up more than a third of the show’s official three-season Spotify playlist of music included in the twenty-four episodes of Killing Eve, and the majority of these songs were written before the show was. The trio’s first album, Guilty of Love, was released in 2016, and its follow-up Heartbreak was put out last year. Yet Unloved’s music and lyrics sync up with the storyline of the series perfectly, almost as if they were created expressly for that purpose.

“Something really different is what we were after for Killing Eve,” says Grieves. “The initial playlist I made of potential female artists [was comprised of] that interesting left field sound. Possibly not as left field as Unloved turned out to be, but it worked so well, especially using vocals so frequently—it’s hard to do that without taking attention away [from the show]. The tone of [Vincent’s] voice means that it becomes an instrument rather than a vocal. It’s textured and it’s not saying too much. It just fits so well.”

“From the beginning, everybody involved wanted music to be a big part of Killing Eve. It was such a bold script and such a bold premise, it needed to have somebody confident who could really drive the drama.” — Catherine Grieves

“[Vincent’s] voice is the lead instrument through a lot of the music,” Holmes concurs. “That has added a whole new character to the overall sound. Sometimes we give her rough direction, sometimes not. Sometimes she comes back with little melodies, sometimes she comes back with a song. Listening to the lyrics about something completely different that somehow work in the most beautiful, ambiguous way, it matches up, but it’s not on the nose. She could be singing about what’s happening in the scene, but she’s not.”

While it doesn’t sound contemporary in the least, Unloved is one of a handful of current artists on the Killing Eve soundtrack. The rest are primarily picked from Holmes’ happy-place decade, the 1960s, which goes a long way in giving the series a timeless quality. The music blasts through scenes, adding to the momentum while ramping up the suspense.

Grieves and Holmes—who share music supervision duties—stay faithful to the original idea of picking music from countries in which the scenes take place. This is sometimes easy, such as in France, Italy, and Spain, where a compilation they both stumbled across, Beat Girls Español from Ace Records, met all their needs. And sometimes it’s not so simple, particularly in Germanic and Eastern European countries, proving exceptionally troublesome in Russia. 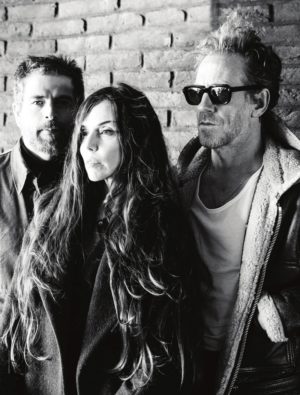 “[Holmes] has the most insane record collection,” says Grieves, who alongside Holmes won the Hollywood Music in Media Award for Outstanding Music Supervision in 2019, the same year Holmes and Ciancia won the BAFTA TV Craft Award for Original Music. “If he has an idea for a song he thinks would work better than anything he could write, then he’ll want to use that song, which is different to most composers who would say, ‘Use my score cue.’ He has this overview which makes him really brilliant to work with. We can bounce ideas off each other, and, it means we can put on a united front if we really believe in a track. It’s easier for us to talk other people around—not that it’s particularly difficult on Killing Eve, everybody sings from the same hymn sheet on the whole, but music is all down to people’s tastes, and it’s so divisive that not everybody will agree. We make sure we fight battles that we feel are really important.”

Grieves reads the scripts ahead of time, Holmes does not. “I was reading them at the beginning,” he clarifies. “Now, I’m in the world, I know the characters, all I want to know is: what country is it in and what are the key moments?”

Holmes and his Unloved bandmate Ciancia—who has notable score credits of his own, not the least of which is for True Detective—create a huge folder of score music at the start of each season of Killing Eve. Keeping in mind where the show is going in the season, when composing for the episodes in Italy, for instance, they throw touches of Ennio Morricone and Alessandro Alessandroni into the mix.

“Some of the best work I’ve done scoring is when the music was done before the film was shot,” says Holmes. “It’s not just about the script, it’s about understanding the world, the emotion of the world, the characters. Once I get that into my head, I feel my way through it rather than think my way through it. I’m constantly gathering information by speaking to a director. I want to hear the broad strokes and the simple emotion of the style, of what they’re trying to say. All that information helps me just as much as reading a script.”

It’s only on season three that Unloved have written songs specifically with Killing Eve in mind. The trio’s single “Why Not” kicked off the gruesome season premiere, and their cover of The Kinks’ “Strange Effect” plays during a pivotal scene between Eve and Villanelle in the third episode. 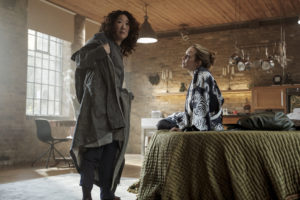 As easily as Unloved’s music plays to Killing Eve, and as much as Shazam is waved at the screen during the series, prior to the show, there wasn’t a place for the trio’s unusual-yet-irresistible sound. Since Killing Eve, Unloved has jumped from tens of thousands of streams to tens of millions.

“It’s like winning the musical lottery,” says Holmes. “The marriage between Unloved and Killing Eve works. It’s as if every track was written for it, but, in fact, none of the tracks were. They had been done in almost different decades. It worked out brilliantly for our band. These things don’t happen very often, and we’re very grateful.”

Says Grieves, “The key to Killing Eve’s success is in each episode you have their score cues, the Unloved tracks, and three or four songs that have nothing to do with either of those, but because [Holmes] has control over everything, there is a real connection throughout each episode and they all feel like one thing.” FL