The band pick at every scab they’ve developed during their arduous last twelve months.
Menu

The band pick at every scab they’ve developed during their arduous last twelve months. 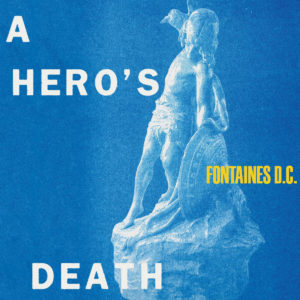 Second albums are always a reaction—you can lean in, you can lean away, but you’re always leaning in relation to that hulking opening statement. In the case of Fontaines D.C., their first album, last year’s Dogrel, looms large and intrusive. In an instant, five lads from Dublin were the (internet’s) next great punk band, their notoriety exploded, and they spent the next year doing what you do when you’re a band having a moment in 2019: grind it out for all it’s worth—extensive, transcontinental touring, Jimmy Fallon, months in vans and cheap motels, taxed mental health, the whole deal. On their new album, A Hero’s Death, the band scratch at every itch and pick at every scab they’ve developed during their arduous last twelve months, the uglier the better.

It’s a pretty basic premise really: Nothing is anything ’til it’s defined in opposition to something else. Like a teen in the thralls of parental rebellion, A Hero’s Death begins by lashing out: “I don’t belong to anyone” sings Grian Chatten in a kind of obstinate chant, hovering over the band’s tight, slithering backing like a warm narcotic. But this isn’t the band taking aim with any specificity. In fact, the song takes pains to wrap it’s defiance in workaday vignette, but the point is pretty clear: their definition will be on their terms.

It’s not the only time this wrenching desire for distance rears its head, either. The back-to-back “I Was Not Born” and “Living in America” are deadset on letting you know just what the band won’t stand for anymore, the former just the kind of acerbic, fuck-the-man, anti-capitalist rant you’d expect from a band so recently sucked into the hit record machine. They’re also some of the record’s grimiest arrangements, where thrashing guitars and thudding drums stack up atop Chatten’s guttural musings. It’s clear the last year has removed some of the rose from their glasses.

This kind of straw-man anger wouldn’t work for an entire record, and thankfully the band resists this trap, instead shifting their vitriol inward, sharpening their teeth with eyes on their own tail. A Hero’s Death is as much in conversation with itself as anything external. “A Lucid Dream,” an unhinged swirl of Sonic Youth–level guitar layering, finds Chatten tumbling downhill, jaded and nearing a breaking point. “And the main thing is that the rain changed direction before you were there,” he gets out in a rush before devolving to a kind of primal, weary howl.

This shaky attempt to hold fast to the tectonic plates shifting beneath the band is a wonderful foil to “You Said,” the sonic inverse of “Lucid Dream” in every way. But the swaying, breezy façade is only aspirational, veiling unheeded advice given to Chatten as he speeds toward “the brink.” A frantic year of gigs and appearance and obligations can become a toxic whirlpool, but reaching out for a hand can also feel like giving up all you worked for.

The push and pull continues throughout A Hero’s Death, with mantras stamping the record with an attempt at calming stillness. Almost every song slips in repetition, with tones running the gamut: hope, dread, reluctance, and acceptance in equal measure. None better than on the title track, whose raucous, swinging refrain, “Life ain’t always empty,” sharply undercuts the good-ol’-days balladry of its predecessor “Oh Such a Spring.”

Intention is important here in that it’s always distorted, with each repetition only thickening the haze. When you repeat something you believe it, accept the lie, or remove its meaning altogether. It’s a wonderful encapsulation of Fontaines D.C.’s journey over the last year, where everything has been put through the blender. If A Hero’s Death is what the band needs to come through to the other side, we’re lucky to be along for the ride.