“The Ascension” is an unrelenting release that asks a lot of its listeners, but it gives back plenty as well.
Menu

“The Ascension” is an unrelenting release that asks a lot of its listeners, but it gives back plenty as well. 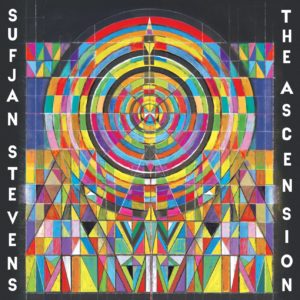 Sufjan Stevens is fed up with America, but not for the reasons you may think. It’s been fifteen years since his fifty-states PR gimmick and his classic symphonic folk album Illinois. Many things have changed for Stevens and the United States since that time.

As with many U.S. citizens pining for some solace, Stevens also became increasingly disillusioned with America’s Faustian bet with the almighty political power grab. He gazes into the inky black mirror in front of him as a pandemic ensnares our consciousness like a whispering snake in Eden. His eighth album, The Ascension, is an eighty-minute, monolithic slab that has the digital fingerprints of recent Björk records and the Janet Jackson classic Rhythm Nation 1814.

Unlike the quickly dropped fifty states project (which his fans finished for him), Stevens has experienced a musical travelogue this past decade by exploring beyond the banjo and Black Hawk War—free-range electronica, autobiographical Americana, sci-fi electro-pop, an Oscar-nominated score, and ambient experiments with his stepfather Lowell Stevens all dot the map of his impressive 2010s discography.

The Ascension is an unrelenting, kaleidoscopic release that asks a lot of its listeners, but it gives back plenty as well. The returned messages arrive as cut-up electronic beats and gasps of anxiety or distended, processed mantras meant to drop all of Stevens’ aspersions at the feet of fellow American citizens in the middle of a historical 2020 election cycle. It’s an album that kicks open the door instead of peeking inside the room.

Of course, with Stevens’ penchant for Biblical allusions, the title of the release does smack of the ascension of Christ, but recent interviews have shifted away from that Biblical read. Stevens spoke to The Atlantic recently and mentioned that he wanted to cast a harsh light directly at the listener this time. “You are the subject of this record. You, the listener.”

This approach can be jarring for a first-time listener since Stevens is known for obfuscation as a songwriter, even during Carrie & Lowell. That last solo album unspooled memories of his mother and her struggles with mental illness like a canister of 8mm film after a summer vacation. The Ascension sounds more like the ebb and tide of a constricting series of anxiety attacks (one track is even called “Ativan”).

Tracks such as “Die Happy,” “Landslide,” and “Lamentations” can easily soundtrack the images of wildfires burning in the West and riots in the streets. The political and pop culture vortex continually loading on our screens in America serves as a fitting backdrop. Musical didacticism oddly suits Stevens. On sprawling closer “America” he pleads, “Don’t do to me what you did to America.” He’s far more direct here than albums like Michigan and Illinois ever could be as their musical tourism veers into sharper melodic retorts.

Stevens musically rolls away America’s resurrection rock later in the record and the smell of death and destruction hangs in the air on“Die Happy,” “Death Star,” “Gilgamesh,” and the absolutely mythic title track. The Ascension’s musical attack fans outward just as much as it stares at the soul within.

The lyrics at the terminus of the record can be seen as a glimmer of hope that America may be ready to ascend to a higher form after a death and resurrection this year. One can only hope. There are some brief moments of levity like the social media/pop artist indictment “Video Game” and the lovelorn, dance-heavy “Sugar,” but Stevens has an apocalyptic lane and he stays well within it.

The typically folk-tinged singer-songwriter capably shifted back to the Prophet synths, pounding bass, processed drums, and cut-up tumult heard on The Age of Adz. Recorded and engineered by James McAlister and Casey Foubert at their respective home studios, The Ascension is almost too anxious to bear, but always draws you into its gravitational pull. In short, it’s a 2020 album about self-healing and the wounds that are still fresh.