In Conversation: Alejandro Jodorowsky on the Intersection of Art and Healing

The Chilean-French artist moves from the screen and the page to the human body with his new film, “Psychomagic: A Healing Art.”
Menu

The Chilean-French artist moves from the screen and the page to the human body with his new film, “Psychomagic: A Healing Art.”

If the Chilean-born filmmaker, novelist, poet, and playwright had never lensed the influential 1970 acid western El Topo or 1989’s avant-garde slasher epic Santa Sangre, or had his failed attempt to film the Frank Herbert slippery sci-fi epic not been captured in 2013’s Jodorowsky’s Dune, Alejandro Jodorowsky would still be legendary for the surrealistic vision he’s given to everything else he’s executed as an artist. And while such dreamlike passion can be witnessed in a just-released 4K Restoration Collection Blu-Ray box set—featuring gorgeous, color-saturated restorations of El Topo, 1968’s Fando Y Lis, 1973’s The Holy Mountain, several CDs of self-composed soundtrack music, and a booklet with exclusive photos, new essays, original reviews, and interviews offering detail and insight into the films and mind of the maestro—little prepares you for the fourth film in the box, his newest work, Psychomagic: A Healing Art.

After years of deconstructing the Tarot de Marseille, Jodorowky created a form of therapy based on the interplay of psychomagic, psychogenealogy, and initiatic massage. While the first form sought to heal psychological wounds by having patients physically performing acts related to the unconscious mind (with the goal of releasing trauma), psychogenealogy looked at the patient’s familial lineage to consider the root of such trauma. Watching Jodorowsky and these patients is like viewing shamans speaking in tongues and ripping one’s unconscious self through the tops of their skulls with massage, limb-twisting, performance art, and other more or less primal acts as part of the treatment.

We caught up to Jodorowsky to discuss the new box, his relationship to Dune, and the real magic behind Psychomagic.

What can you say about the new Dune and what director Denis Villeneuve has done with it?

We need to relax and have fun, but this is not the job of the artist. We have another kind of cinema, the cinema of the artistic, where there is a different focus in order to say something. This is not only entertaining, but rather the seeking of truths, of who and what we are, a search for the soul. What is that soul? What is the mystery of everything, not just in a mystical sense, but in a philosophical sense? Political too, although political movies are a different story altogether. Religious movies, too, are yet another way.

The book of Dune is a big book containing all of those elements. It is very complicated, very profound. It is impossible to make a film out of Dune in its entirety in two hours. Impossible. When I made my project they said I was crazy because I wanted to make my Dune fourteen hours long. It had to be a long film. I could not make a little thing out of all that. I wanted mine to be a film that gave humanity a new way to see life, just as the book did. Is Villeneuve doing that? I don’t know. It’s a new life now. We’re living at a time when industrial corporations are playing with our souls and our lives and our health in order to make money. This new Dune—this is an industrial picture.

I know [Villenueve], I won’t speak bad of him. He’s a good person—he’s doing as much as he truly can with this picture. He must be able to make a movie that will change our way of life—like this pandemic has, for example. That is what real art can do: change life. Not be just another cog in what comes from a company. Money is not everything. It is necessary, but it’s not everything. That said, I hope he makes a lot of money, because if he doesn’t, he will never make another picture.

“What do you think about your heart, your organs? You do not know, because you’re busy being alive. Every picture for me is alive like that—says something about me.“

I am a human being who never worried about the business, only art in my pictures. You know how you know an artist? When he dies. I am not in the past, I am here with you now, and so are my films. The story and the characters of El Topo may be forty years old, but they are alive. My pictures do not die. Industrial movies? They make the money, and then pop, they’re gone. Another film will come to take its place. The Dance of Reality and Endless Poetry, too. Art, real art, changes your life. They give you new ways to see life, to feel life. What do you think about your heart, your organs? You do not know, because you’re busy being alive. Every picture for me is alive like that—says something about me.

Is this why you take so long between films to come up with the next?

Yes. I am not making hot dogs—one hot dog is similar to another hot dog. I make pictures when my life changes, and then I start again. After Santa Sangre, I waited 25 years to make my next picture. Then there was Dance of Reality and Endless Poetry and Psychomagic.

What is the responsibility of an artist who is also a healer, as you put forth in Psychomagic?

I was not a healer to start. In a previous film I was ill, and I started to heal myself during the making of the picture. As I advanced, I realized that I needed to heal the public and my family. Step by step, I began to believe that I must heal humanity. I am not American, I am not French. We are people on one planet. We are humanity. We must be healed. We are killing the earth. We are lost with war, nuclear bombs, and exploitation of all. We need to stop all of that shit. We need to heal humanity—heal ourselves first, then the world. 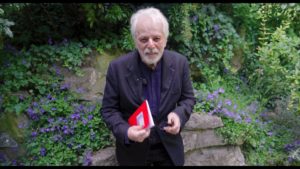 In the moment, you may find happiness for yourself, but as an artist you must find what you can give to others. Life is creation. Work is creation. Art is creation. We need to advance. When art becomes commerce, it fails to advance. We need human beings in film—not supermen. But what is it to be a human being? My goal is toward humanity, toward healing. But I am not a healer. I am searching for happiness, to bring you happiness. Intellectual happiness. The brain is a beautiful thing. The planet is a beautiful thing. I am 91 years old, and I have never seen such a system focused on economics as we have now. Why are we destroying this planet?

I know you studied movement, that you studied to be a circus clown and a puppeteer, and that you went to Paris in the 1950s and studied miming with Marcel Marceau. Considering the physicality of psychomagic, how do you feel as if all this influenced your life in art and healing?

Psychomagic is the sum of everything I have been and everything I have worked on. I started out being an artist very young—I was sixteen, seventeen years old when I had a company of puppets. I actually wanted to be a celebrity. I had a big ego. From there, I started to see what it meant to be an artist, to see as an artist. I explored everything that the body could do—athletic jumps, movement. I was a clown. I did work with Marceau and even created some of his pantomimes, but at heart I was still a clown. What could be more? I started with yoga, zen meditation, improvisation: everything that I could find out about the mystery of the body. I didn’t want to die, ever. Why would I have to die? I fought against that—I stayed active, healthy. I did tarot. Here I am seventy years later, as an old man. I pushed my limits. Creative improvisation was key, doing anything that I could in public.

“I am 91 years old, and I have never seen such a system focused on economics as we have now. Why are we destroying this planet? “

So the aspects of healing came from this?

Step by step, people came to me with problems, great psychological problems. Problems as such cannot solely be cured through family, they must be taken as part of society. Psychoanalysis was a part of making society aware. But this was not enough—to just hear and talk. You must touch. I was not a doctor, but I knew all senses must operate toward the healing process. To be free. Show me a problem, I will give you an act. The person will do the act, and then write to me to tell me what happened—I did this for seventy years. Not just in the picture you see, but on a regular basis.

So Psychomagic isn’t exactly a documentary.

No, because a documentary captures that which is past. Psychomagic is happening now, continues to happen. I am healing the person in front of you. My wife, who is a photographer, made the people comfortable. She didn’t film it with lights and set ups. Once you do that, the person becomes an actor. This was a delicate procedure. So this, then, is as close to reality as we could get.

Does involving yourself in the filmmaking and the healing process make any other project you film pale in comparison?

I mix reality with movies. A healing art. A healing movie. A reality art. It is all its own thing. FL