Director Mary Wharton and producer Chris Farrell discuss their new documentary, which showcases the former President in a new light.

The merest mention of Jimmy Carter conjures up a variety of images and personas. There’s his 1977-81 term as the 39th President of the United States, and the highs and lows it encompassed. There’s the post-POTUS Carter—Nobel Peace Prize winner, Habitat for Humanity advocate, artful negotiator of international conflicts, and dedicated human rights activist. And then there’s the pop culture Carter, the one with the big smile, the folksy drawl, the peanut farm, and the wild brother named Billy.

“Music devotee,” however, isn’t the first thing that comes to mind. But Jimmy Carter: Rock & Roll President, a new documentary from award-winning filmmaker Mary Wharton, details Carter’s genuine love for a wide array of musical genres and performers, including rock acts like The Allman Brothers Band, soul and gospel artists like Aretha Franklin and Mahalia Jackson, and country legends like Willie Nelson. 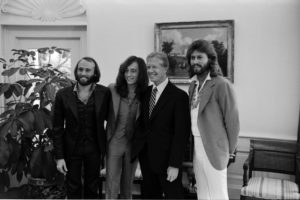 Carter with The Bee Gees

But popular music was more than just something Carter enjoyed in his downtime; it was also a means for Carter to connect with potential supporters during his 1976 bid for the presidency. Long before Beyoncé and Jay-Z used their influence to promote Barack Obama, or Bill Clinton played sax on The Arsenio Hall Show, Carter understood that forging a connection with popular performers could help to elevate him in the eyes of a key constituency: younger voters. And in an incredibly savvy move, Carter tapped Bob Dylan, Nelson, the Allmans, The Charlie Daniels Band, and Jimmy Buffett to play at his campaign rallies and whistlestop events.

Written by author, producer, and radio host Bill Flanagan, Rock & Roll President also shows how music motivated Carter to address the issues of the day. One moving sequence in the film shows how, during the Iran hostage crisis—in which fifty-two American citizens were held captive by Iranian revolutionaries for more than four hundred days—Carter would retire to his White House study and meditate on his course of action while drawing solace and inspiration from a gospel recording by Nelson.

Another clip finds Carter speaking frankly about race to an assembled crowd of politicians after a jazz summit on the White House lawn featuring, among others, Dizzy Gillespie, Dexter Gordon, Herbie Hancock, and Ron Carter. “When Carter stands up and says we’re guilty of racism—and, that while jazz has given so much to us, [we also need to] think about the history and segregation,” says Rock & Roll President producer Chris Farrell, “That’s a very powerful moment.”

Powerful moments like these run throughout Rock & Roll President, as do affectionate testimonials from many of the musicians who caught Carter’s ear, including Nelson, Gregg Allman, Roseanne Cash, and Dylan, who speaks in arcane but moving terms about the many facets of the former President.

For both Farrell and Wharton, the impact of Carter’s love of music on many facets of his personality—including his faith, his connection with the average American, his wry humor, and his capacity for empathy—was the connective tissue for the documentary.

“It’s no big secret that Carter was a music fan and there were all these concerts at the White House,” says Wharton, whose directing and producing credits include the 2009 film Joan Baez: How Sweet the Sound and episodes of VH1’s Behind the Music and Legends series. “The whole story was hiding in plain sight. But what we did was dig a little deeper and use it as our touchstone. We had this opportunity to explore these really big ideas about the power of music, what it means to connect with other humans, and how music plays a role in that. And, to give people a different perspective on someone they thought they knew.” 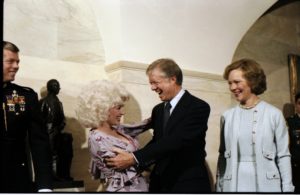 While Rock & Roll President shines a spotlight on nearly every aspect of Carter’s life and career, the filmmakers note that the rock and roll connection will probably be the most eye-opening aspect for viewers. “Carter was always thought of as a little square,” says Wharton. “But the fact that he was friendly with Bob Dylan and pot-smokin’ Willie Nelson,” she laughs, “and radical longhairs like the Allman Brothers—it’s a little bit surprising.”

Unlike some subsequent brushes between Presidents and pop performers, Wharton and Farrell say there’s nothing phony about Carter’s connection to music. Throughout the film, Carter—who was interviewed for the project in 2018—sounds deeply enthusiastic while recalling his own musical upbringing and his journey as a listener that began as a boy with country and gospel radio, connected him with Dylan’s activism in the 1960s, and helped him find common ground with his sons in the 1970s. 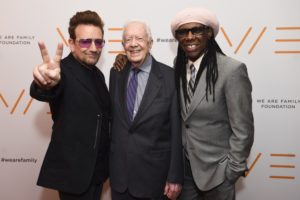 Carter with Bono and Nile Rodgers. Photo courtesy We Are Family Foundation

As civil rights activist and Congressman Andrew Young, who served as U.S. Ambassador to the United Nations under Carter, notes in the film, Carter’s breadth of musical knowledge allowed him to enter Black churches and sing along with the assembled without referring to the hymnal. “His connection was very authentic and genuine,” says Farrell. “There wasn’t that sort of hokey showmanship. The reason those musicians [campaigned for him] was that they liked and respected him.”

The footage of the Allmans working out on “Whipping Post” at a Carter campaign stop, or a beaming Willie Nelson gripping the candidate’s hand, will undoubtedly please music-minded viewers, but it’s what the performers say about Carter that lands with the greatest impact. Gregg Allman speaks at length about how Carter’s friendship (and political pardon) got him through the turmoil following his testimony against road manager Scooter Herring, while Paul Simon and Allmans/Rolling Stones keyboardist Chuck Leavell weigh in on how Carter’s integrity and commitment to progressive causes drew them to his campaign. 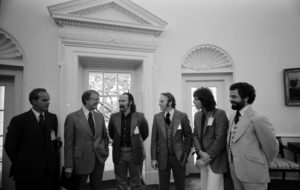 “Paul Simon talked about how as an artist, you’re asked to be the front act for a politician,” says Wharton, referring to one segment that unfortunately ended up on the cutting room floor. “You end up feeling like a pawn, that they’re using you. But he never felt that with Carter. That speaks volumes.”

Though music is the through-line for Rock & Roll President, Carter’s essential humanity is also present in every scene. The factors that capsized his bid for re-election—rising gas prices and taxes, as well as the widespread perception that he had erred in refraining from using military force against Iran during the hostage crisis—are examined in detail, as is his return home to Plains, Georgia, and his focus on humanitarian issues in the decades that followed his White House run. In each instance, Carter is depicted as a man who viewed his leadership role as an opportunity to help his fellow Americans and the world at large, with little thought given to his own interests. 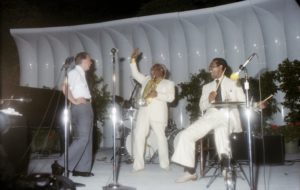 “He was an effective President,” says Farrell of Carter. “I think he passed more legislation than any one-term President, and he did some pretty progressive things. But he’s gotten the short end of the stick, some of which had to do with his style, and some of which had to do with external events. If the worst thing that can be said about a President is that he had moral courage, I’d take that any day.”

“I was looking for a quote from the 1976 Democratic Convention,” says Wharton. “And I remember getting chills when he said, ‘The American people will want to be proud again. We want the truth again.’ He said a wall has gone up between the people and the government, and we’re tired of it. All of those things felt like they could be said right now.

“So it’s happened before, and I hope that [this film] offers a little bit of hope. That’s what I think has been missing—a lack of participation in the process. I hope that people are inspired by this to get on board.” FL 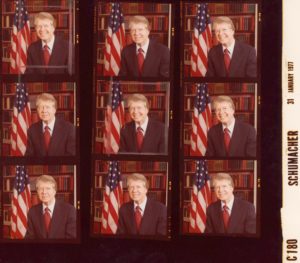