Kamasi Washington, Robert Glasper, 9th Wonder, and Terrace Martin on how their new supergroup is fit for the post–George Floyd world.
Menu

Kamasi Washington, Robert Glasper, 9th Wonder, and Terrace Martin on how their new supergroup is fit for the post–George Floyd world.

When the supergroup of Kamasi Washington, Robert Glasper, 9th Wonder, and Terrace Martin were crafting compositions for their upcoming project as Dinner Party, they had no idea how topical their understated police brutality meditation “Freeze Tag” would become. Just a few months after recording it, George Floyd, an unarmed Black man who was suspected of using a counterfeit $20 bill, was killed by white Minneapolis police officer Derek Chauvin.

“Police brutality, or brutality against Black Americans, has been a thing for a very long time, whether the rest of the nation decided to look at it or not,” 9th Wonder says from his North Carolina residence. “These [kinds of] songs have been made before we even got to a George Floyd.”

“Freeze Tag” was, unfortunately, timely and eerily prescient. It also fit in thematically, if not sonically, with some of rap’s most powerful songs. Even though Dinner Party is made up of artists who don’t rap, they all came of age as hip-hop culture exploded. Washington, Glasper, and Martin, of course, famously worked on Kendrick Lamar’s landmark 2015 album To Pimp a Butterfly. For his part, 9th Wonder was a member of rap group Little Brother, and has produced songs and albums for dozens of rap acts ranging from JAY-Z to Murs.

For the first time in arguably decades, there seems to be a groundswell of activism, of actions that may result in significant change. Much of America believes that our system is broken and that new systems need to be implemented.

“For so long, [music’s] been a tool to bring awareness. It’s like, ‘OK, once you actually build awareness, how do you use music to help bring actual change?’” —Kamasi Washington

Dinner Party wants its music to align with this new era. “There’s a possible shift that’s taking place now,” Washington says. “For so long, [music’s] been a tool to bring awareness. It’s like, ‘OK, once you actually build awareness, how do you use music to help bring actual change?’ What we’re trying to do is use our voice and our art to make people aware of the problems that matter. We’ve been here before in history where people become aware of those problems and it’s like, ‘How do we not repeat history? How do we not end up in the same place that we’ve been in for hundreds of years?’ I think maybe now the job is to keep people pushing forward, to motivate people, to keep moving, keep fighting, keep pressing to make things better because if you let go, we’ll fall right back to what we were.”

The Dinner Party project is a modern musical anomaly on many levels. It combines high-profile artists from North Carolina (9th Wonder), Texas (Glasper), and California (Washington and Martin) on what would essentially be considered a jazz project—but it was mostly built upon drums and grooves by 9th Wonder before the other three added piano, saxophone, and other instrumental elements. It also doesn’t contain any solos from the musicians. Instead, the seven selections arrive in a tight twenty-three minutes and are often accented by crooning from Chicago vocalist Phoelix, a talented rising artist with remarkable tonal range. The remix LP the band surprise-released last week, however, spotlights its impressive list of guest collaborators, including Snoop Dogg, Cordae, Rapsody, Buddy, Herbie Hancock, and Tank and the Bangas.

Glasper likens each song to interludes, musical thoughts that can be digested like appetizers. “Freeze Tag” arrives with the most topical heft and significant attention, having logged more than 1.2 million streams on Spotify at press time. Although instrumental tracks “First Responders” and “The Mighty Tree” carry heavy titles, they contain a balance of forcefulness and elegance that enables the mind to explore a variety of emotions. There aren’t layers of complex musicianship and dizzying chord progressions—a conscious decision Dinner Party members made while crafting the music.

“There’s room for your thoughts to move,” Robert Glasper says. “Some of this stuff is protest, but it’s not overly protest. Everybody’s watching the news. IG, Facebook, everywhere you look, everybody’s talking about police brutality. Sometimes with the music you want to escape all that stuff.”

Time, though, wasn’t waiting for Dinner Party and its mission. So the quartet decided to be proactive.

“We speak a little bit on police brutality and things of that nature, but we also speak on love at the same time. It’s kind of a Marvin Gaye approach, if you will.” —Robert Glasper

“We decided to drop [the Dinner Party project] now because we felt like the way this album was put together kind of works for the time,” Glasper says. “People want to escape what’s going on. We speak a little bit on police brutality and things of that nature, but we also speak on love at the same time. It’s kind of a Marvin Gaye approach, if you will. I think he was the best at masking protest music to where everybody loved it. It’s kind of like crushing the aspirin into the orange juice and giving it to your kids. It’s the sneaking of it in there to where it could do more than something that’s like hardcore protest music.”

Life, Dinner Party understands, is not one-dimensional. It is typically full of dramatic peaks and valleys, ones that can be especially treacherous if navigated alone. “I want our music as Dinner Party to be music that really helps people,” Terrace Martin adds. “Before you go do something crazy, you’re popping this in. Or if you want to love, you play this. If you want to have a conversation, you can talk to this. I want this to be life music. I want us to be very involved with people’s lives.” 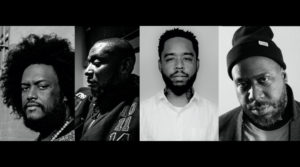 Dinner Party may have just become an official group, but the members have been gravitating toward each other for years. Martin and Washington bonded during their high school years in Los Angeles. Glasper met Martin at a jazz camp in Denver when they were fifteen, and has known 9th Wonder for a decade. Glasper was introduced to Washington through the LA jazz scene, when he would jump in on his sets. Washington returned the favor when Glasper played in Southern California. Dinner Party was Washington’s first time working with 9th Wonder, but he was familiar with him through the other members. So once they actually started collaborating, it was a largely seamless process.

“It wasn’t like we’re four musicians and we’re coming together for the first time,” Glasper says. “It was like, ‘Yo, this is normal for us.’ Now we’re going to get together and let the world hear it.”

“The longer we stay in the house, the music is going to become more message-driven because there’s no party to talk about.” —9th Wonder

How the world operates has changed quickly and dramatically since March 2020, but times of struggle and protest have inspired some iconic music in the last several decades. Dinner Party hopes to be included in that conversation.

“As long as music is being made, people always use it as a vessel for message,” 9th Wonder says. “The longer we stay in the house, the music is going to become more message-driven because there’s no party to talk about. We’re all in the house and trying to be safe. So we’ve got to use this time, especially the window that we have when America is listening, to say what we’ve gotta say.”

“Being open to collective work [to change society for the better], that’s the energy that this project is bringing to the table, and I think that it’s something that’s very much needed,” Washington adds. “I think that the problems we have in this world aren’t going to be solved by one person. They’re only going to be solved by the masses, by all of us coming together and bringing all of our energy together. One person can’t do it. But it can happen with all of us.” FL 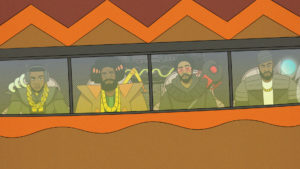