as told to Dan Epstein art by Wayne Coyne

I’m sitting here in Oklahoma City, in our giant warehouse where we keep our guitars and our amps and our unicorns and space bubbles and mirror balls and things. Usually, all this stuff would be in two or three trucks right now, traveling across America and being used to rejuvenate the spirits of Flaming Lips fans out there. And here it is all just sitting in our warehouse gathering dust. But this is the state of the world right now. What can you do?

The night we made the video for “Flowers of Neptune 6” [from The Flaming Lips’ latest album American Head) was that same night in March where that NBA game here in Oklahoma City was postponed right before tipoff because of the pandemic. That was the night we realized that the shutdown was really happening. Since we were shooting the video out in the country, it was quite a long drive back to the base where we work. Everybody was talking in the Jeep about Tom Hanks, the coronavirus, and the Thunder game, and how this was happening in Oklahoma City—our city. 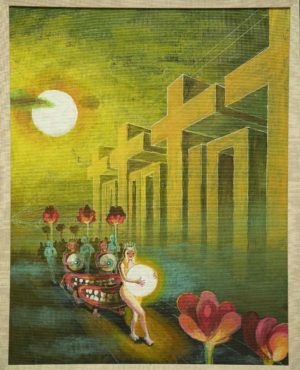 “Army of the future carrying the real weapons that will preserve mankind:: Smiles, curiosity, light and flowers” by Wayne Coyne

I’ve said it before, but Oklahoma City has done far more to shape The Flaming Lips than we have done to shape Oklahoma City. I think people have maybe a simplistic view of what it must be like to be “these freaky artists living by their own rules in such a conservative Midwestern place,” or whatever. But for me, it’s really not like that. I mean, I grew up here in a big, big family, and my older brothers all had freaky friends. They took drugs, they rode motorcycles; they just did not live by anybody’s rules, you know? So my life has always kind of been like that. But at the same time, I’ve also known politicians here from when they were in high school, and watched them grow up and become people in the community that can help other people.

I’ve personally known David Holt, the mayor of Oklahoma City, for over fifteen years. He was the previous mayor’s chief of staff. I think he’s Republican—I don’t really know—but I know he helps me, and he helps my neighborhood. But if I show support for him on social media, there are a lot of dumbasses out there that feel like they need to tell me how stupid I am for supporting the mayor of Oklahoma City, who I have known for years…

“I always try to remember, there’s going to be 500 people responding to whatever you post with ‘Fuck yeah! Do it, brother!’ And there’s always going to be ten people that are saying, ‘Oh, you’re stupid.’ So fuck those people, you know?”

I try to show support for a lot of different people and causes on social media. I mean, we get looked at plenty; so many people have supported us and our music over the years, so I never feel like I have to constantly be saying, “Hey, look at us, because this is going on!” There’s so many cool and important things in the world that could get a great amount of help with just a little bit of notice from somebody, a little bit of boost on Instagram and social media. I can’t tell you how many artists I wouldn’t have known about—but because of Instagram, I’ll see their stuff and I’ll go, “What the fuck is this?” I think that’s one of the great things about social media: You get a little moment to say, “I think this is cool—and maybe you agree?”

The other side of it is that there are always people who use it as an opportunity to tell you how to live. But I would say to anybody, don’t let that stop you from saying great things and being brave. If that stopped everybody, nothing would happen. I always try to remember, there’s going to be 500 people responding to whatever you post with “Fuck yeah! Do it, brother!” And there’s always going to be ten people that are saying, “Oh, you’re stupid.” So fuck those people, you know?

There are sometimes things where I think, “I don’t need to chime in on that,” or “Instagram is just not the place to say this.” Like the music that we’re putting out now, it’s not this radical, loud, “Let’s fuck up society!” sort of music. A lot of it is very gentle, emotional music. I’m not screaming at people that motherfuckers are dumb, and we’ve got the answer. I don’t have an answer, but we’re singing about emotional things that anybody can relate to. 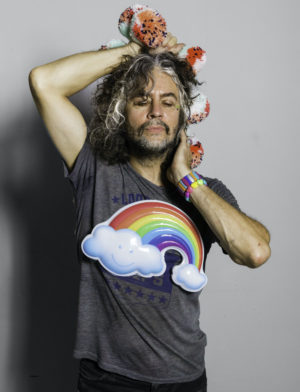 I don’t always promote a lot of Oklahoma City–specific events on social media, because when I’m on Instagram I’m talking to the whole world; it’s rare that I’m saying, “This is only for people in Oklahoma City!” But, you know, we’ve lived here forever, well before anyone even knew what an “internet presence” was, and most of the things we’re doing and involved with here are person-to-person things that you don’t necessarily need to let the whole world know that you’re doing. But we love our city, and we love being a part of it.

Oklahoma City has become a cool spot, but a lot of people wrongly think that’s because of me. It was really just sheer coincidence, you know? I grew up here, and I liked living here as an artist and a musician, because it doesn’t cost much money, and no one is telling you how to live. I could see if you were a young guy in a band, saying, “I wouldn’t mind living the way The Flaming Lips do,” and I’d say, “Yeah, I agree. I live the fucking best life ever!” But such a big part of why I do is that there are so many other people here, creative and otherwise, who live here for the same reasons that I do, who are actively involved in the community and make it a better place. FL 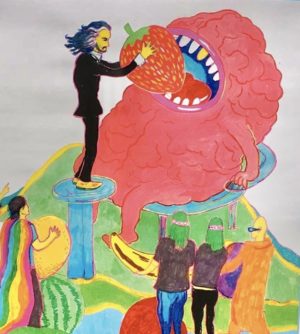