On Their New Album, Dorian Electra’s Agenda Is to Make You Think

On Their New Album, Dorian Electra’s Agenda Is to Make You Think

“Hey, can you hold on one second?” asks Dorian Electra, momentarily exiting our FaceTime session to take a call from Pussy Riot co-founder Nadya Tolokonnikova. The two are chatting about their plans to join together later in the day to film a video for “My Agenda,” their bombastic collaboration with Village People that also serves as the title track to Electra’s latest full-length project. Electra got their eyebrows freshly dyed just prior to our chat in preparation for the shoot, and Tolokonnikova is in the process of receiving a rapid COVID test as we speak.

Dorian Electra has a lot on their hands at the moment. Not even eighteen months have passed since the release of their debut album Flamboyant, which they were still touring as the pandemic hit back in March. Instead of taking a moment to breathe, they set out to create an even more ambitious record with My Agenda. Musically it doesn’t settle within any genre, with elements of bubblegum bass, baroque, trance, trap, deconstructed club, and metal somehow seamlessly woven throughout—a feat Electra chalks up to their diagnosed ADHD. The project sits in stark contrast to the glitzy, polished hyperpop world of their debut, an exploration of their gender identity and queerness through more traditionally structured pop tracks and colorful, high-production music videos. My Agenda’s visuals are much darker and grittier, which is due both to their DIY, shot-in-quarantine nature, as well as the themes that inspired the project.

My Agenda is a high-concept deep dive into dark internet culture that the musician has been developing since the end of 2019 when they started researching incelism and the rise of the alt-right. As they explored the depths of far-right online communities they began to realize that the extreme political divide in the United States has grown far too strong to ignore.

“It’s been really scary to see people that have grown up in the same educational environment, in big cities, and with liberal parents turning to extreme views like white supremacy, anti-immigration, misogyny, anti-feminism, and all of these things that are really toxic and destructive,” they explain, citing stories of cisgender men who’d held left-leaning beliefs before falling down alt-right YouTube rabbit holes, resurfacing as white supremacists in a matter of months. It led Electra to think about the vulnerability of such individuals and how simply dismissing them can be unproductive and in turn aid in reinforcing the political divide.

The topic became even more relevant when the world went fully online due to COVID, and Electra started performing at virtual parties in Zoom rooms. “You’d go in there and there would be all these edgelord-y people coming in and saying heinous, racist, homophobic slurs…specifically targeting queer-inclusive parties,” they share. “What is driving people to do that? How is it that they have so much self-hate or hate toward others?

“It’s been really scary to see people that have grown up in the same educational environment, in big cities, and with liberal parents turning to extreme views like white supremacy, anti-immigration, misogyny, anti-feminism, and all of these things that are really toxic and destructive.”

“Even though we’re hyper-connected we’re also extremely isolated, and that can also breed really toxic internet communities and internet cultures like incels and the misogyny and self-loathing that things like that can fuel,” Electra adds, noting that they began to contemplate their own role in shrinking the political gap. “How can we on the left be better at communicating these concepts to people without pushing them further to the right and making matters worse?”

Their answer to that question comes in the form of My Agenda, on which Electra provides commentary on the imagery, humor, style, and edginess that run rampant in incel and alt-right online circles. Electra attempts to flip it into something empowering that will make listeners cringe, laugh, and, most importantly, think: “I really like to push the boundaries and make people question like, ‘Is this cool? Or is this really fucking lame?’” They’ve traded in their perfectly precise “Guyliner” for smeared Joker makeup and their signature Liberace-esque attire for fursonas, cargo shorts, and fedoras (once a feminist symbol before they became douche couture).

“The left has been historically edgy, whereas the right has been the stodgy conservative ones,” Electra says. “If we lose edginess, we have lost so much of what is important to helping us have an advantage in the culture wars.”

It’s easy to brush off the project’s presentation as sarcastic and meme-like—which a lot of it is. But its concept runs far deeper throughout its eleven tracks, as well as its guest verses from twelve meticulously placed featured artists. “Monk Mode” features Gaylord, a queer metal musician whose work Electra was intrigued by as it exists isolated from the genre’s history of far-right associations. Rebecca Black of “Friday” fame guests on “Edgelord,” a track on which Electra plays a figure better fit to craft offensive 4chan posts than pop songs. As a teenager, Black was on the receiving end of such posts. “When I think of people in my generation who’ve had the most experience with internet hate, I think of Rebecca Black,” says Electra, noting that they are inspired by the way Black has reclaimed her story and see her verse as the “ultimate ‘fuck you’” to those who ridiculed her as a teen.

My Agenda’s title track is perhaps the most assertive alteration of traditionally conservative ideology: it imagines an alternate reality where the so-called “gay agenda” has gone so far as to impose a militant queer dictatorship run by Electra, Pussy Riot, and Village People. “My agenda might offend ya / Out here flexin’ in my rainbow suspenders,” Electra chants on the chorus. The trio is an unexpected (yet fitting) group of queer collaborators who’ve all been incredibly impactful both in and out of queer spaces—Pussy Riot for their anarchist and feminist activism, Village People for cementing a song about cruising at the Y.M.C.A. on straight wedding playlists (and presidential campaign stops) for the rest of time.

“I really like to push the boundaries and make people question like, ‘Is this cool? Or is this really fucking lame?’”

Of course, Electra’s actual agenda is not nearly as intense—so much so that they chuckle when asked about it. “I guess my agenda is to make people question things, whether it’s aesthetics, their built-in ideas of what’s attractive, beautiful, or sexy, or their own identity in some way,” they say. “I think that attitude, more so than blindly agreeing with somebody, is ultimately so much healthier to our society, our civil discourse, our personal discourse, and our interpersonal relationships.”

The release of My Agenda comes just weeks before the presidential election, which only makes its material more timely. But Electra thinks the chances of the conservative online communities it’s inspired by listening to it closely enough to understand its message is unlikely. “I think it’s more likely that those people would just hate me, find me annoying as fuck, and want to do something horrible to me, to be completely honest,” Electra says. “But I think that’s the reality that we’re living in. Who knows who can be reached? I think the only thing we can do is try.” FL 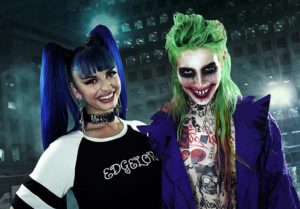