S.G. Goodman on the New, Fresh, and Politicized Country of “Old Time Feeling”

The Kentucky-born-and-bred singer-songwriter is shutting down small-minded prejudices.
Menu

The Kentucky-born-and-bred singer-songwriter is shutting down small-minded prejudices.

BACKSTORY: The daughter of a proud and dignified family farmer/sharecropper rising through the ranks of the Kentucky bar band scene in order to front her own echoing, raw country rock ensemble with wry autobiographical lyrics
FROM: Hickman, Kentucky
YOU MIGHT KNOW HER FROM: If not her music then perhaps her consistent disgust and internet mediated resentment toward Mitch McConnell
NOW: Goodman, her producer Jim James (My Morning Jacket), and her longtime band unleashed the magical Old Time Feeling onto the world in August

It’s hard to choose just one defining moment on country newcomer S.G. Goodman’s debut record. It could be during “Old Time Feeling,” the tune that acts as the gorgeously forlorn new album’s title track, and speaks to bigoted lowered expectations of her Southern home. It could be the slow, rangy manner in which Goodman sings the autobiographical tale “The Way I Talk,” which frames her father’s backbreaking existence as a political statement. It could be how she injects the lyrical éclat of “Space and Time” with confessional elements related to suicidal thoughts and queer romance.

“I believe that the South is the soul of the country, and if the soul is sick then so is the body,” says Goodman from the same porch where she wrote “Red Bird Morning,” another one of Old Time Feeling’s poignant, pointed moments. “The South has historically been the scapegoat for those who don’t live in this region to point a finger toward bigger problems and regressive policies. I wonder what would happen if people invested time and energy into a progressive idea of what the South could become. If there’s anything positive that can be attributed to this administration, it’s that it truly lifted the veil of how widespread these social injustices and deep-seated beliefs are, and how certain injustices attributed to the South are actually in every neighborhood in this nation.”

Regarding sexuality, Goodman is just as frank. “I didn’t have the ‘pleasure’ of coming out, I was found out. Given few choices of how I could go about my future, I chose one of authenticity and the consequences that come with that. So ‘living out’ became a journey of reconciling to my newfound reality—of understanding that forgiveness would have to start with me. That it would be my work, and mine alone, to interrogate what I had unknowingly internalized about myself and about those who made that process so painful.”

“The South has historically been the scapegoat for those who don’t live in this region to point a finger toward bigger problems and regressive policies. I wonder what would happen if people invested time and energy into a progressive idea of what the South could become.”

During our lengthy conversation—which detoured into unpacking her favorite year for music (1971, with Link Wray’s eponymous LP, Karen Dalton’s In My Own Time, Harry Nilsson’s Nilsson Schmillson, and Bill Fay’s Time of the Last Persecution as obsessions), much of which informs her reverberating, beautifully grungy sound—Goodman uses the words “detective” and “interrogate” as often as a beat cop might. She plumbs every topic—from the natural room sounds of boots walking and guitar picks clicking, to the cottonmouth snake her dad holds on her new album’s cover, to the narrative distance necessary for writing autobiographically—like she’s wringing out a damp washcloth of its last drop of water. “It’s all I have going for me, so I better,” she replies when I note how seriously she appears to take songwriting. “I also have a reverence for being respectful to my characters, even if the character is myself, which might be harder to be respectful of.”

Without going into specifics, Goodman speaks on how she came to “the empathy phase of this journey,” as a woman from a small rural place, where Christianity is the most common form of ideology. This isn’t just about how she views sexuality, its rights, and its emotions; empathy pours from Goodman with every word, whether it be for the LGBTQ community or growing up a farmer’s daughter in a part of the country that sees farming as a political statement. 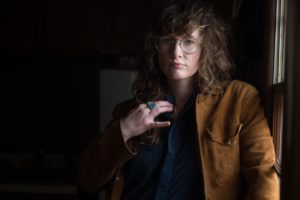 “I found myself being empathetic to those who weaponized religion by applying what I know they were taught—and what I was taught—to believe about the world and the beliefs surrounding eternity in that faith tradition. Despite the fact that I no longer participate in that faith tradition, I understand that the response from some of those who were closest to me looked at my sexuality as ‘eternally’ life-threatening. Those same people looked at their response as one that was meant to save me—because they love me. It hasn’t made their response easier, but having that lens of the underlying motive of showing me love, despite it not feeling that way, allowed me to reconcile with why we could only make peace where it could be found. Even when it became apparent that the divide in our logic was vast, and that peace would be hard to find.”

Ask Goodman about how she got involved in politics and speaking up for greater visibility for left-leaning people in rural places, and she says it’s because she’s “a living, breathing thing. As far as my art goes, that’s a representation of who I am and what I’m experiencing in my daily life. That’s as far as it goes. I don’t sit down with any intention of writing about a particular thing. You can’t dissect it. It’s me writing through experience. There’s no separating. Even if I choose not to engage with politics, that doesn’t mean that they’re not engaging with me.” FL