Morby’s sixth album is both cosmic and terrestrial, with tracks seeped in death and change.
Menu

Morby’s sixth album is both cosmic and terrestrial, with tracks seeped in death and change. 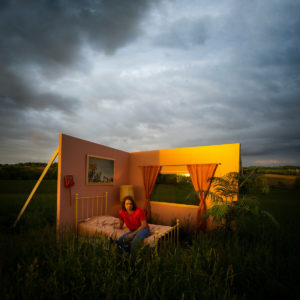 There are decades’ worth of rom-coms populated by countless variations on a Hallmark-esque idea about how leaving a place helps you understand what you love about it, but Kevin Morby’s latest album Sundowner is the unclichéd version of that spiritual longing. Although the prolific singer-songwriter has a penchant for theme-heavy albums and metaphysical metaphors, Sundowner is unpretentious with a weighted blanket–like comfort. His sixth album was made in isolation, but not in the current quarantine—after a gnarly heartbreak, he moved back home to Kansas in 2017 and made music in a shed. Now he’s releasing these sparse arrangements in a time befitting of them.

Sundowner is Morby’s most stripped-down record, and, as a result, his most intimate. At times his voice is pressing and aloof, like Lou Reed’s, detailing western fables on “Brother, Sister.”  He turns moments reflecting on death into surreal spiritual balms—the deceased friends are depicted as having pianos in their mouths, while dead celebrity icons become billowing campfires, their souls passing on but not without leaving behind an imprint. At one point, he bluntly reveals a quiet anger toward loss: “I wish my friends were still alive,” he sings on “Jamie.”

Morby described Sundowner as his most “me” album as a result of not assembling an elaborate backing band. Instead simple piano chords, tinny plucks of acoustic guitar, and faint production guide his lyrical odes to the Midwestern twilight. When he does flaunt his instrumental intuitions, such as the guitar solo on “Valley” or the gritty rumblings of “Wander,” they shine bright like stars outside the illumination of a city’s light pollution.

At first listen, Morby can get lost on his own backroads. The more metaphorical imagery of “Brother, Sister” might seem at odds with personal highlights like “Don’t Underestimate Midwest American Sun” and “Jamie.” There’s a tendency for Morby to revert to elementary lyricism—on the former he sings about “wheels on the bus” before referencing the nursery rhyme “One, Two, Buckle My Shoe” on closer “Provisions.” But each listen elicits a new warmth from Sundowner. Even the nursery rhymes seem to fit alongside campfire adventures, reminding us that these songs we’ve outgrown once taught us that music helps comfortably pass the time.

Morby is well aware of the melancholy of sunrises. Their beauty is fleeting, and they remind us of our own mortality. Across the album, he mentions the death of loved ones around him while also singing about his own inevitable demise. That’s the great comfort of these ten tracks: another sunrise, another breath, passing the time in spite of the life’s unknowns. On “Provisions,” Morby sings about taking stock before heading out into the unknown. “And then cast your vision on a memory,” he sings. Taking stock of the past is as crucial as food and water when heading into darkness. Some of his most captivating work, Sundowner makes the dark road ahead less daunting.