Sooper Records Gives Back to Chicago

NNAMDÏ, Sen Morimoto, Glenn Curran, KAINA, and Blacker Face, the label’s co-founders and artists, wind up succeeding as activists without thinking too much about it.
Menu

Sooper Records Gives Back to Chicago

NNAMDÏ, Sen Morimoto, Glenn Curran, KAINA, and Blacker Face, the label’s co-founders and artists, wind up succeeding as activists without thinking too much about it.

While Sooper Records wasn’t necessarily founded with an activist mission statement, the Chicago-based label tends to find themselves speaking up for their community, as well as for national social justice causes. Just a week before this interview took place, Sooper co-founder Sen Morimoto made national headlines over a local controversy. The fallout around the Chicago Department of Cultural Affairs and Special Events (DCASE) censoring Morimoto is a perfect example of why this story felt relevant: This artist-run label and its signees don’t even have to explicitly pursue activism to start conversations and effect change. These are people who, by simply showing how they feel—in and outside their art, on and off stage—do the work automatically.

But back to the controversy: DCASE asked Morimoto to precede his pre-recorded stay-at-home Millennium Park Summer Music Series performance with a statement about Chicago Mayor Lori Lightfoot, who presented the show. Morimoto says that “it seemed crazy to mention the mayor without talking about [her failure to address] some one hundred thousand protestors in Chicago demanding the police be defunded and the Civilian Police Accountability Council [CPAC] enacted.” Because he was asked to censor the message he’d included at the beginning of the performance, he wound up pulling the video from the lineup entirely, ultimately uploading the set to his YouTube channel. 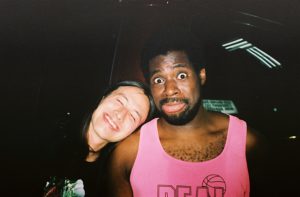 “I felt like [my comments were] really tame, and that nothing would happen,” Morimoto says. Nnamdi Ogbonnaya, another Sooper co-founder, agrees: “It was so well-spoken, and it’s just insane that this happened.” Morimoto also ultimately released the audio of his cancelled performance on August’s Bandcamp Friday to benefit the Prison + Neighborhood Arts Project, which connects inmates with teaching artists and scholars, just as Ogbonnoya—better known by the metonym NNAMDÏ—did with his Black Plight EP in June to benefit the Black equity–focused not-for-profit eatChicago and the anti-police violence group Assata’s Daughters.

Ogbonnaya says that “everything colliding” made it clear that he couldn’t go on separating music and activism: “Either you’re all in or all out.” Where previously he funneled his politics into his music—“I’ve written several songs about police brutality against African-Americans and discrimination because I experienced it directly,” he says—he acknowledges that such conscious activist behaviors are relatively new to him.

“Either you’re all in or all out. I’ve written several songs about police brutality against African-Americans and discrimination because I experienced it directly.” —NNAMDÏ

Ogbonnaya, Morimoto, and Sooper’s third co-founder, Glenn Curran, all say they’ve rarely discussed how the label can effect change. One big exception: After George Floyd’s murder, they all asked, in Curran’s words, “What is our social media voice…what’s appropriate there?” Curran recalls that Obgonnaya and Morimoto emphasized the need to “amplify the voices of the people doing the work and putting out the information.”

Sooper artist Kaina Castillo, who records and performs as KAINA, did exactly that last summer amidst a local crisis. The day of her release show for her debut album, 2019’s Morimoto-co-produced Next to the Sun, she learned that ICE would be conducting raids in Chicago. The first-generation daughter of Guatemalan and Venezuelan immigrants, Castillo says her listeners largely include “young kids of immigrants” and that news of the ICE raids was “truly heartbreaking for me,” so she used her show to make a difference. 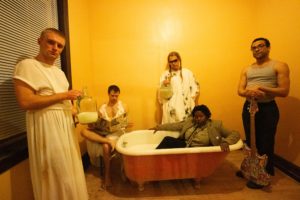 “It would have been so shitty to not address that when it was happening,” she explains—so she recruited an immigrant rights activist, Anthony Joel Quezada, to speak before her set and offer his help. “He made a call to action during his talk,” says Castillo, “about everyone pulling out their phone and signing [a petition]. I remember going on Instagram after my show, and I saw people sharing that.”

Some of Castillo’s shows have reminded her that her mere presence as a first-generation Latinx person tends to offend certain people. “My existence is a form of activism,” she says. “People get mad that I say certain things on stage or…that I even exist. I’ve learned from a very young age that that’s just the reality of my life.”

While people have gotten angry at Castillo during her shows, she says she hasn’t faced any physical violence. The Black members of explicitly radical leftist, Black liberationist, avant-garde Sooper act Blacker Face can’t quite say the same. Bassist PT Bell recalls “that one cat who tried to come at me with a knife” after a show. Frontperson Jolene Whatevr—who works full-time at the Detroit community organization non-profit Auntie Na’s Village—shares an anecdote about the potentially transformative power of Blacker Face’s music and live show, without which Whatevr says the band is “not a complete conversation.”

“My existence is a form of activism. People get mad that I say certain things on stage or…that I even exist. I’ve learned from a very young age that that’s just the reality of my life.” —KAINA

“This person was like, ‘I’m a neo-Nazi,’” she says, but he loved Blacker Face’s show. A post-set conversation with PT led to change in that individual, Whatevr believes. “That person is for sure in the streets now, and they’re definitely into BLM,” she says. “They were just a baby from a rural place that was like, ‘Your music is something I identify with’ and was so easily turned.” As Castillo and Morimoto would say, Blacker Face’s existence is resistance.

“We all saw them and were like, ‘How do we get involved?’’’ Curran says of when he, Morimoto, and Ogbonnaya first saw Blacker Face perform. Not long after Sooper signed the group, the label wrote a note of support so that the band’s “My Life Matters” video, which tackles the Chicago Police Department’s murder of Laquan McDonald, could receive grant funding from none other than DCASE.

“It’s sort of funny to see the politics there,” Curran remarks. The grant provides an odd contrast to DCASE censoring Morimoto, but it’s really just another instance of Sooper’s crew showing who they are and what they feel—and, in the process, subverting long-existent systems. Or, as Ogbonnaya says, “Music is the one thing I know how to do.” The rest follows naturally. FL 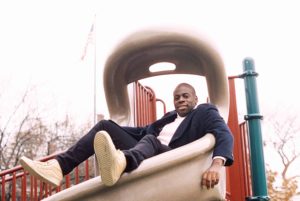