Adolescent naiveté rejuvenates and challenges the two-party system in the American Legion’s Boys State program, a week-long recreation of the U.S. political process for high school students held annually since 1935 in all states except Hawaii. Inside that hormonal microcosm, rowdy yet politically engaged young minds are randomly divided into factions, Nationalists and Federalists, to play at developing a party platform, passing legislation, and nominating a candidate for state governor to run against the adversary band.

In a provocative gesture, the kids in the 2017 Texas iteration of this simulation, which has nurtured former presidents and relevant figures on both sides of the aisle, voted to symbolically secede from the union. Their mischievous jest caused a media stir and caught the inquisitive eye of documentarians Jesse Moss and Amanda McBaine, who saw the program as a rare space for people from opposite ideological spectrums to practice civil discourse.

“In this moment of deep division, we loved the idea of exploring the potential that young people have to agree,” says Moss.

Equipped with twenty-eight crewmembers and six cinematographers, the co-directors captured the 2018 Texas gathering through the lens of four participants who exemplify the country’s clashing perspectives. As compelling as it is terrifying about our election prospects, Boys State, the resulting film, was awarded the top non-fiction prize at the 2020 Sundance Film Festival and debuted on Apple TV+ earlier this year.

“Our goal was not some sort of objective balance like certain newspapers,” notes Moss about the subjects the project centers on. “We come with our own politics, our own biases as human beings. We bring that to every choice we make of who we put in the film, but we also weren’t looking to reinforce our own viewpoint.”

Thriving in a white-dominated and highly conservative environment, two of their real-life stars, Latinx teens Steven Garza and René Otero (who identifies specifically as Afro-Latinx), had to walk a tightrope with every interaction while not betraying their progressive ideals.

The proud product of an immigrant family, Garza is an advocate for gun reform and one of the organizers of March For Our Lives Houston. He cites senator Bernie Sanders as a major inspiration in his political awakening, and aspires to work behind the scenes on similar campaigns. Nevertheless, Garza doesn’t discount the possibility of running for office one day. At Boys State, he got a glimpse of the logistical and emotional demands of running as the Nationalists’ gubernatorial candidate.

“In this moment of deep division, we loved the idea of exploring the potential that young people have to agree.” —Jesse Moss

“They didn’t have the extra pressure of looking different or having different opinions,” says Garza about his fellow statesmen who were in the right-wing majority. But despite his unapologetically liberal stance, Garza was able to garner support from the group at large. They responded to his genuine interest to compromise where possible in order to find common ground. Rather than being discouraged by the roadblocks he encountered, the experience reaffirmed his commitment to seek solutions.

“I walked out feeling more hopeful, and even more idealistic that maybe we’re not quite there yet on coming together and trying to make this country a better place for everybody, but we’re a lot closer than most people think. And definitely leaps and bounds closer than the adults are,” adds Garza.

Cast during the shooting—as opposed to being interviewed in weeks prior like the other young men—after impressing the directors with his oratory skills, Otero symbolizes a strong voice for the underrepresented. “As someone who has experienced what it’s like to be treated differently off the basis of something you can’t control, my politics are oriented to have the empathy to not allow that to happen to anyone else,” he says with firm resolve. 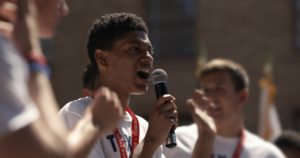 Embracing the camera following him around throughout the ordeal, Otero found courage in defending what he stands for and decided to use the platform to show his true, magnetic self. As of now, his hope is to interact with politics from an alternative angle, perhaps activism, education, or nonprofit work. Invigorated by the longevity and visibility of the recent Black Lives Matter protests, in which he participated, he hopes to build intersectional bridges within the Latinx community from which, as a Black person, he’s often felt isolated.

Notions of masculine identity and particularly how these played out in the political arena are also examined in the film as the numerous boys put them on display. For the directors, Garza embodies a compassionate version of manhood, while Ben Feinstein, a pro-military teen who uses war metaphors to describe political tactics, exudes a violent masculinity. To provide a counterpoint to the testosterone-heavy picture painted in Boys State, they want to pursue a follow up focused on the initiative’s female counterpart, Girls State.

Prompted by Garza and Otero’s compassionate diplomacy, Moss noticed a connection between the bright teens and pastor Jay Reinke, the protagonist in his acclaimed feature The Overnighters, which chronicles the religious man’s efforts to comfort and support countless people who arrive in North Dakota to work in the oil business. Individuals like them, with a selflessness that leads to meaningful action, can enact change in others—at least that’s his hope.

“I walked out feeling more hopeful, and even more idealistic that maybe we’re not quite there yet on coming together and trying to make this country a better place for everybody, but we’re a lot closer than most people think. And definitely leaps and bounds closer than the adults are.” —Steven Garza

“In Steven, I was reminded of how powerful it is when someone who naturally embodies soulfulness, authenticity, and sincerity truly believes that politics is about serving others and not yourself,” adds McBaine. “It was a reminder that the right person can really summon us to be our better selves.”

Both Garza and Otero know the United States has veered into an abyss of disillusionment toward institutions—even more so with the current administration. But they are also clear that the only way out is to stare this dark moment squarely in the eyes instead of i dealizing a nation that has proven to not be working for all—or even most—of its citizens.

For Otero, patriotism in the American sense has been rendered a flawed concept because it demands a blind devotion to the homeland. True love for your country, he believes, should come with accountability and the ability to question its malfunctioning systems. “The real patriots are the ones that are willing to tear at the foundation if that’s what it takes to see America be the best it can be,” explains Otero, almost as if describing both himself and his kindred Boys State comrade.

“I genuinely do love the United States of America,” concludes Garza. “I’m very patriotic about this country, but that doesn’t mean that I believe it’s above criticism. I criticize it all the time, and I criticize it because I truly believe that it can be even greater than it has been.” FL