BACKSTORY: A multi-instrumentalist and composer primarily on harp, Nailah Hunter is carving a singular lane for herself alongside champions of the modern new age movement, Grammy-nominated singers, and meditation circles alike
FROM: Los Angeles, CA
YOU MIGHT KNOW HER FROM: Her debut EP, Spells, which came out earlier this year on Leaving Records—prior to that, you could find her collaborating with Kali Uchis and John Carroll Kirby, as well as performing for Leaving’s pre-COVID concert series in LA’s Highland Park
NOW: Reissuing Spells on vinyl and working on her debut album for Leaving while teaching harp lessons and conducting the occasional private sound bath via video call

Nailah Hunter’s debut EP, Spells, came out of a creative drought when she began viewing songwriting like the ordered steps of an incantation, but the Los Angeles–based harpist understands if new listeners aren’t on board with the witchcraft aesthetic, especially with its recent co-opting by Instagram influencers, TikTok, and Urban Outfitters.

“Witchery, being spiritual, all those things are really trendy right now, so I’m sure there are people who are like, ‘Oh cool, she thinks she’s a witch,’” Hunter acknowledges with a laugh. “Having come from music school, I needed to get back to basics. I needed to get back to why I like to create, and it’s because I get to tap into this place that is removed, but also a place that is ancestral and feels natural.”

In just under twelve minutes, Spells’ six songs genuinely create magic in their brief yet transportive nature, conjuring the harp’s medieval associations with the wistfulness of a Studio Ghibli score. At the same time, Hunter’s debut feels timely within the recent new age revival that has brought undersung heroes like Laraaji and the late Hiroshi Yoshimura to long-overdue praise. It’s a lineage that makes sense for Hunter, given Spells’ world-building ambience and her prior experience hosting sound baths before the pandemic—but more than anything, Hunter sees her fantasy-driven music as an intuitive respite from the state of the world as a Black artist. 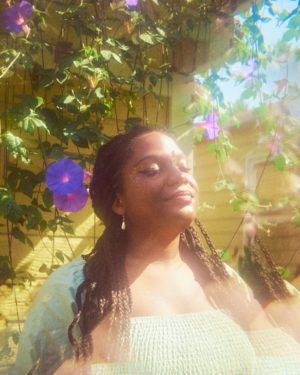 “Definitely fantasy is an escape and a safe place, but you create that space for yourself so that you can get back to reality fortified,” says Hunter. “That’s something I struggle with as a Black woman—me sitting here talking about the Lady of the Lake is not going to stop the police from killing Black people.”

Finding a group in Los Angeles similarly focused on healing music while non-performatively pushing for racial inclusivity seems like a Herculean task, but Hunter credits Leaving Records for building a community focused on all of our likenesses. She met Leaving founder Matthewdavid through John Carroll Kirby, who she worked with on an acoustic session for Kali Uchis, and was soon invited to play the label’s free concert series, Listen to Music Outside in the Daylight Under a Tree. Amidst art installations and the abundant greenery of Highland Park’s La Tierra de la Culebra, the Listen to Music series hosted Ana Roxanne, Carlos Niño, Flying Lotus, and Hunter among countless others in an all-genre melding pot of jazz, ambient, live beatmaking, and sound collage. Unlike Hunter’s typical performance experience of lugging her harp into venues to the confused reactions of bar staff and patrons, the series was a revelation.

“I think that community is really open to all kinds of people and all kinds of music, but the one throughline is this tapped-in quality,” she adds. “This sounds dramatic, but there’s a focus on the divine and finding that next answer, which a lot of music is not about right now.”

“Fantasy is an escape and a safe place, but you create that space for yourself so that you can get back to reality fortified. That’s something I struggle with as a Black woman—me sitting here talking about the Lady of the Lake is not going to stop the police from killing Black people.”

As Hunter found her ideal performance space and prepared to release Spells, COVID-19 hit—but the last thing the pandemic has done is limit her creative output. Over the summer, she released standalone singles “Nacre Meadow” and “Black Valhalla,” the latter of which was inspired by the initial protests against police brutality and centers on reclaiming the mythological hall from “Odin and all those white dudes” for her and the Black community. Aside from the singles, Hunter is also preparing a vinyl reissue of Spells, a debut full-length album for Leaving, a collaborative EP with her fiancé, a song cycle on the Santa Ana winds, and a series of dragon books with Ianna Vasale, who painted the artwork for Spells. As far as making time for streaming performances amidst all her projects, Hunter is at home with the new normal, both literally and figuratively.

“I actually love the feeling of recording or coming live from my home studio where all of my stuff is,” she admits. “I can just go get a little tea and say hi to my cat, but I think right before all of this happened, I was finally getting into situations where I was like, ‘Oh, I do like recording like this.’ It’s not that I don’t like performing; I just don’t like performing in the way that we were all performing before.”

While a lot of her fellow musician friends are feeling burnt out on streaming, Hunter accepts its limitations while looking for safe ways to offer the harp’s vibrational healing “outdoors and very distanced.” Since her last in-person sound bath under the first full moon of the year, public interest in healing music has naturally increased alongside the pandemic and protests, which Hunter is already seeing play out within the harp community.

“I know a lot of harpists right now who are taking their harp literally right outside their house and playing a concert for their community. That’s what we all need right now, and I actually think I’m going to start doing that, too. Just like a little harp hour, maybe every Sunday, so that everybody can feel nice. That’s why I’m in it. I’m like, ‘Let’s heal, guys! Let’s do it!”” FL