The Power of Produce: Artist Lauren Halsey on Caring for Her Community with Summaeverythang

Art & Culture
The Power of Produce: Artist Lauren Halsey on Caring for Her Community with Summaeverythang

For the past year or so, the artist has been taking over the space next to her studio in LA’s South Central neighborhood with the aim of catering to the community she celebrates in her vividly colorful work. Called Summaeverythang, the space intends to quite literally provide some of everything for children and young adults in the neighborhood. “Capoeira, tutoring, artmaking, film programs, gardening, field trips, etc,” reads a proposed list on Summaeverythang’s website. “The center is a site to develop Black and Brown empowerment: personal, political, economic, and sociocultural.”

“Basically the mission of the space was to provide, at a very high level and for free, educational support to children and young adults in South Central,” Halsey explains on the phone from her studio. “But it would also branch out to moments of expressive activity, from music to dance to surfing to gardening.” 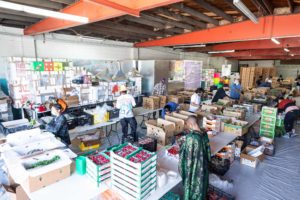 The space was set to open in late summer or early fall, but the pandemic quickly rendered that plan unviable—at least for the time being. “When corona happened and I realized I wouldn’t be able to open the community center to the public, I started thinking about ways to still engage with the public outside of the actual space, because of those liabilities,” Halsey says.

She realized she could redirect all of the energy, passion, and funds she’d been saving for the community center into something that would make an immediate, tangible difference: free food. And so, since mid-May, Halsey and her small dedicated crew have been sourcing and distributing boxes of fresh organic produce to families in the Watts neighborhood. By late August, they had delivered 7,500 boxes—six hundred every Friday. She says, “The plan is to continue it long into—at the minimum—next summer.”

The project is a continuation of the “for us, by us” ethos that has run through all of Halsey’s work since she started working as an artist, having first studied architecture at California College of the Arts, followed by a BFA at CalArts and then an MFA at Yale. Halsey has always created in close collaboration with her community; her work is equal parts creative expression and community service. In 2016, she put together a float for that year’s Martin Luther King Jr. Day parade in just 48 hours with the help of friends, family, and neighborhood kids who put down their bikes and lent a hand. “This collaborative ethos has become the soul of my practice,” she told the art publication Frieze late last year.

“People might find it inspiring that other people from the neighborhood are approaching these gestures as self-directed. And hopefully it inspires them to be like, ‘I can do it too!’”

In her exhibition at the beginning of this year at LA’s David Kordansky Gallery, Halsey reserved certain items for sale to “collectors of specific ethnicity.” It made sense given the content: recreated protest signs with messages like “Reparations Now!” and “Black Workers Rising! For Jobs Justice & Dignity,” interspersed with advertisements for exploitative home loans and logos of multinational corporations that have devastated low-income communities with predatory practices and products.

Halsey’s message of anti-gentrification and exercise in ethical ownership continues with Summaeverythang’s nonhierarchical, community-driven approach. She hopes that others feel empowered by seeing her and her team launch the program with no prior training or background in food distribution. “People might find it inspiring that other people from the neighborhood are approaching these gestures as self-directed. And hopefully it inspires them to be like, ‘I can do it too!’”

She admits that it wasn’t all seamless, though. “The first week of the food program it was like, ‘Oh my god, what did I get myself into?!’ I had no clue; food advocacy isn’t my language. As a human, intuitively, right is right, and we all know that. But as far as the logistics, it was this cold Google search, like: ‘How to make a produce box,’ ‘Organic produce in South Central.’ We didn’t really get a system going until the third week. That’s when we went from having a U-Haul to refrigerated trucks, and from using janky dollies to buying pallet jacks, and really formalizing it.” 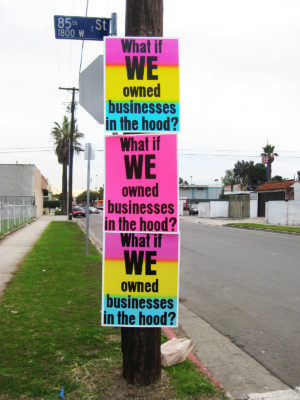 This setup has also enabled Halsey to continue her arts practice concurrently with the food program. At the time of our interview, she was creating a new piece for the Frieze Art Fair in London, so she had to step back from some of the food program’s day-to-day operations. “I haven’t been going to the farmer’s market every Wednesday, as I was doing before, paying all the farmers, picking up the produce. My team does it while I stay behind and carve. Because there’s trust and we work so closely together, I’m able to maximize my time when I need to on the art side of things, and jump back in. By doing this collaboratively, and not really being the leader and giving everyone equal weight, I think they feel very confident to accomplish the food program without me.”

It’s because of her art that Halsey is able to run the food program at all. “I source from about ten to fifteen farms every week. Sometimes things get donated, but a lot of it has been from personal savings—I spent a year saving for the community center.” She is incorporating Summaeverythang into her applications so that if she wins awards, she can keep directing funds toward the center. “But it’s very expensive,” she admits. “It’s at least $16,000 a week for the produce.

“My goal with this was to buy the best produce that exists, that all of these beautiful restaurants on the Westside are sourcing from… For me, it’s worth the cost. And I think folks can totally see the difference.”

“My goal with this was to buy the best produce that exists, that all of these beautiful restaurants on the Westside are sourcing from. I found that very important, to bump up and subvert the produce pallet that stocks the grocery stores here, which is sub par, and a lot of the times unacceptable, in my opinion. So, for me, it’s worth the cost. And I think folks can totally see the difference.”

This consideration of her audience is where Halsey differs from many artists, who often shrink at the thought of bearing in mind those who will consume their work. Halsey defers from modesty in favor of active audience participation throughout the process. By doing so, she creates more honest, exciting work that her audience is deeply invested in—because it actually reflects them.

“In my mind, there’s a certain audience that validates the work,” she concludes. “And that’s who I’m making the work for. If I have someone in mind, and invite them to the studio to see the work, they say, ‘Oh that’s tight,’ or, ‘Oh, I don’t know about that,’ I take it so seriously because they’re also community members. And I’m putting up these images as representations of us, or proposals of the future for us. If people are going to put me in conversation with the canon and art history and contextualize me in that way, I have to also be in conversation with the context that makes all of this work—the subject, the people, you know. It’s so important to me.” FL