Ghetto Kumbé on Embracing Cumbia, Indigenous Communities, and a Politics of Forgiveness

Ghetto Kumbé on Embracing Cumbia, Indigenous Communities, and a Politics of Forgiveness

BACKSTORY: Two longtime musicians from the internationally acclaimed fusion act Sidestepper team up with a renowned dunun player amidst the mix of DJs and visual artists in Colombia’s warehouse scene.
FROM: Bogota, Colombia
YOU MIGHT KNOW THEM FROM: Beyond any single dancefloor smash or remix, their educated brand of sociopolitical consciousness precedes them
NOW: After a handful of EPs, the trio signed to ZZK Records for the recording of their eponymously titled debut album, released in July

Started in 2014 as a percussionist party and musical laboratory before maturing into a politically charged artists union focused on the transmission of messages steeped in social criticism and poetic narrative, Ghetto Kumbé serves a higher purpose beyond guiding a good groove. Merging tribal traditionalism and Afrofuturism with global left-leaning rhetoric is a mission for its members, each from Colombia’s Caribbean coast.

“The group manages an aesthetic of analog percussion on a platform of electronic music textures, with the presence of plug-ins that frame us within the new music of the world,” shares Mercado during a Spanish-language exchange about Ghetto Kumbé’s initial impulses. For the trio, it’s the drum that serves as the base for all they survey. “The drums have an energetic, communicative, and present character,” notes Mercado. “The drum is guided by the human intention of how things are said and helps to strengthen the intentions of those ideas. The drum is a catalyst for our emotions.”

The journey of Ghetto Kumbé began with an exploration into cumbia, an ancient Colombian musical rhythm and folk dance derived from Indigenous and Black slaves on the Caribbean Coast during the Spanish conquest of the Aztec Empire in the 1500s. “Starting off, we had many concerns about the origins of cumbia, concerns that sent us to West Africa and the music of our Aboriginal territories, leading us to a musical, cosmogonic, and empathic identification with their stories.”

“It is not necessary to belong to any political affiliation to realize that many things in the world fail in shaping the fabric of social communion. One day we should forgive, reconcile, and repair ourselves in order to create a wonderful utopian world where politics based on love and life reign, and leave behind this politics of death that has degraded us.” —Andres Mercado

Going back to “Soy Selva,” and carrying through to their new album’s “Vamo a Dale Duro,” Mercado points to a through-line dedicated to Wayuu culture, the Wayuu being an Aboriginal people on the northern coast of Colombia. Along with an empathy with the country’s Aboriginal and Afro-descendant population, Mercado stated that his trio’s identity “in the musical, in the culinary, in the ways of speaking, the way we dress, all of this is because we are aware that we live in conditions of very marked inequality.”

State policies have harshly affected the Wayuu communities, particularly the diversion  of the Ranchería River’s flow to favor large companies. “They are beings of the sea, tropical forests, and deserts,” says Mercado of the Wayuu. What “Vamo a Dale Duro” does is continue their denunciation and protest with a message extended to all people in a state of vulnerability, conditions of inequality and state-sanctioned abandonment, from the ancient to the future. With that, “Vamo a Dale Duro” is a cry of unification, a wake-up call to inequality and change, and an invitation to transform selfishness into something commonly good. “It is a battle cry to seek union and improve the reality of many people who suffer,” he says.

That Ghetto Kumbé make music at all—dedicated to the past or the present, to the Indigenous people or their homeland’s ongoing struggles with poverty, racism, and violence—is a risk unto itself. “Colombia is a country polarized by its internal political wars,” shares Mercado.  “Social networks and their immediacy generate tensions. Artists are abandoned and unprotected, and the pandemic has worsened our situation.” Luckily, Mercado claims groups such as Ghetto Kumbé have alliances with “friendly music labels to ensure stability in our work and maintain our independence.” 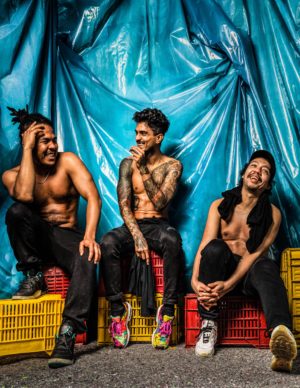 Mention the sway of leftist politics in their angry, dissatisfied lyrics and Mercado claims Ghetto Kumbé is neither left, right, nor center. “We believe in action and critical thinking,” he says of his trio’s search for truth and plumbing memory to reach forgiveness, reparation, and reconciliation. “It is not necessary to belong to any political affiliation to realize that many things in the world fail in shaping the fabric of social communion. One day we should forgive, reconcile, and repair ourselves in order to create a wonderful utopian world where politics based on love and life reign, and leave behind this politics of death that has degraded us.”

Asked to compare what’s happening in Colombia—socially, racially, and politically—to what’s occurring in the United States, Mercado states that his homeland is acting as a mirror to all that accompanies social failure: an economy of death, hypocrisy in health management, a fight against drugs that has spread a discourse of confusion.

So what do the members of Ghetto Kumbé believe is the answer to these evils? “Do not screw with another’s life,” says Mercado. “We believe that if we begin to apply that principle of coexistence, things would improve substantially.” FL