With “Fires in Heaven,” Salem Wrote a Meditation on Giving Up Control

With “Fires in Heaven,” Salem Wrote a Meditation on Giving Up Control

Back in September, a blue-checkmark Salem account appeared on Instagram with a YouTube link to a forty-minute-long mixtape called STAY DOWN. The following week a video post appeared of the duo’s Jack Donoghue driving a pickup truck through a nighttime lightning storm, scored by a delicate, uncharacteristically tender, synthpop-inflected ballad, along with the caption “SALEM – STARFALL *OUT NOW*.”

Given the rest of the news that day, Salem announcing their return after eight years of near-total silence seemed cosmically trivial. The West Coast was on fire—it hadn’t even been a week since the skies over the Pacific Northwest turned an Old Testament shade of orange. There were children locked in cages on the border, a president stoking civil war, genocides breaking out around the globe. Before the day was over, 901 more Americans would be added to our city-sized population of COVID-19 dead. The idea that anyone in the middle of all that could even care about an intentionally obscure, notoriously divisive witch house project having a comeback seemed deeply fucked up.

But the world has become noticeably more Salem-like in the eight years they’ve been away, and not just because—despite breaking up on the verge of crossing over and a concerted critical effort to discredit them artistically—their aesthetic vision has managed to permeate pop culture and fashion. Everyday life has become noticeably darker, more chaotic, increasingly feral. The haunted, paranoid death trip they evoked a decade ago in the “King Night” video has become the national mood. Unlike nearly everyone else making music right now, Salem seems to get what the new world we’re in is all about. And what they’re saying is: give up.

The snippet of “Starfall” that they posted on Instagram didn’t prepare me for the whole thing: a swooning shoegaze-emo-rap hybrid that climbs to heart-rending highs before melting down in a psychedelic waterfall of cascading rave synths. It feels landscape-sized despite clocking in shy of three minutes. In the video, Donoghue and John Holland—the group’s only other member since the departure of Heather Marlatt, who has said that she was pushed out but seems to have come to a reconciliation—chase tornadoes across the plains of Oklahoma and Texas, soaking wet and chain-smoking, looking as exhausted and spiritually wrung-out as two people stepping into the daylight after an all-night binge. When a towering tunnel cloud, shot from terrifyingly too-close, breaks into frame while the song melts down for the final time, I felt a rush of weightlessness, the sickening vertiginous thrill of sudden freefall. I punched the replay button again, then again. 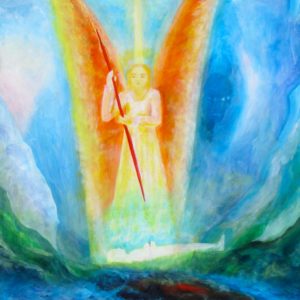 Once you get close enough to a tornado, whether or not you end up in its path is out of your control. Seeing that funnel cloud through the lens of a camera speeding toward it, it’s hard not to remember how many catastrophes we’re rocketing towards as a nation, a civilization, a species, and how close we are to the point where none of us—not even the most powerful people on the planet—have a say in how it turns out. For all we know, we may already be past it.

Collapse is the major theme of Fires in Heaven, the band’s first album since 2010’s King Night. Sometimes that means collapse on a personal scale. On the opening track “Capulets,” Donoghue raps a deranged chopped-and-screwed monologue over the dusty, haunted “Dance of the Knights” movement of Sergei Prokofiev’s ballet Romeo and Juliet, flatly describing what goes through the head of someone choosing addiction over anything and everything else: “Ask me what I’m doing with my life / Aint shit to tell y’all […] Rather burn some foil / Smoke some powder off some clean folds.” The overall mood is like finding yourself somewhere isolated with someone who’s much crazier, and on a lot more drugs, than you realized when you got in the car with them.

But the more you untangle Fires in Heaven, the more you realize that they’re talking about collapse on a larger scale too. The video for “Red River” opens with surveillance-style footage of Chinese commuters, their heads boxed in by facial recognition tags and their bodies overlaid with stick-figure gait analysis. Then, what seems at first to be a critique of digital-age totalitarianism zooms outward to show the systems that drive it—in America as well as China—and the chaos and rot at their core. Mass consumption breeding endless piles of waste. Shipping containers stacked neatly in row after row, then tumbling into disorder. A cargo ship sinking with alarming speed. “Red river, red river / Wash over me,” Donoghue mumbles through a bank of filters and pitch-shifting effects until he sounds less like a human than a suicidal AI letting its batteries run out. From this angle, there’s no light at the end of the tunnel.

A sense of hopelessness and letting go permeates Fires in Heaven. In horrorcore moments like “Capulets” and the homicide fantasy “Crisis,” giving up comes as a violent release. Other times it’s gently seductive—the title track is lotus-eater synth-pad psychedelia that pulls you softly down into a bottomless pit of sticky cotton-candy bliss, disturbed only by twitchy trap hi-hats emulating the faint, itchy aura around an opioid high. Even the few uplifting moments wind up with their bottoms falling out. “Starfall” has all the markings of a swooning love song for the ages, but by the end, the protagonist has walked out on his lover in the middle of the night, convinced that she—like everyone—is beyond saving.

The first time around, this attitude got Salem labeled nihilists, which maybe they were. Now it comes off more like collapsitarianism. The term often refers to people who are proactively working to bring about collapse of one sort or another, from deep ecologists dreaming of human extinction to Boogaloo Boys trying to kick off a new civil war for any number of reasons, including for the sheer fun of it. But it can also describe people who simply believe that collapse—or, more frequently, the collapse—has already started, and is already past the point of being undone.

A sense of hopelessness and letting go permeates Fires in Heaven. The first time around, this attitude got Salem labeled nihilists. Now it comes off more like collapsitarianism.

Collapsitarianism is hopelessness on a global scale. But hopelessness isn’t necessarily a bad thing, the way that most people think. Losing hope lets us see the world around us as it is, and all the problems in it that require confronting. Hope, either for untenable endless “growth” or for a return to pre-Trump “normalcy,” is the reason that no matter which side wins, in a few days we’ll elect a president without an adequate plan for solving any of the interlocking terminal-level catastrophes we face. Hopelessness—a pragmatic, tactical lack of wishful thinking—is what drives projects like the Svalbard Global Seed Vault, where scientists are trying to safehouse the planet’s genetic diversity against the forces we’ve let loose in the world. People across the country have given up hope for the future, and have started to concentrate on creating the world they want in the here and now, from communes in the woods to guerilla raves happening in the midst of a pandemic.

Buddhism teaches that hope is a form of desire, and that desire is the root of all suffering. The path to spiritual freedom begins with letting go, as anyone who’s ever gotten sober can attest. One of the reasons I kept going back to the “Starfall” video over and over again was because I couldn’t exactly identify what it was—besides good audio production and clever editing—that had me hooked. Eventually I figured out that, unexpectedly for something coming from Salem, it was because it brought me peace. There’s a palpable feeling of  liberation and release that Donoghue and Holland emanate after coming dangerously close to a storm. The world is falling down, but if we let go and fall with it we can still find bliss. FL